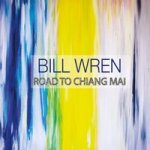 Its hard to believe that almost 4 years have gone by since I wrote about Bill Wren’s last album with Frank Ralls entitled Journey Around The Sun. I began that feature article with these words: “If I were asked to write a one-word review of Journey Around The Sun, that word would probably be ‘wow!’ And perhaps followed by another exclamation point or two if space permitted.” And that brief description could just as easily apply to this new release, The Road To Chiang Mai. It is a truly epic production on every level.

While the previous album, produced in 2012, took its theme from the Mayan Prophecy which was of great  relevance that year, this new album is much more personal and draws from the profound life events that have unfolded for Bill since that time. In his words: “The album overall, like my first album One Day In A Life, is a reflection of events in my life. The stories behind The Road To Chiang Mai are what happened in my life in the last four years: The passing of my wife of 43 years and my time of mourning, eventually meeting Tamara and our travels to Thailand for a month, our marriage in Hawaii, our honeymoon and our current life together. I did not sit down to write a song about these events but they came when I reflected on them with guitar in hand.”

While this is a deeply personal album and it is Bill Wren’s name that is on the cover, he is very quick to point out the major role and absolutely indispensable contributions that his long time collaborator and friend Frank Ralls played in the production. When in our interview I asked Bill if there was anything in particular that he wanted readers of this article to know, he replied: “I would like people to know about my very talented friend, producer, arranger and co-writer Frank Ralls who has been involved with my music going on 10 years. He and I have always clicked concerning my music’s direction. I hand off my demos to him and he takes them all the way to full maturity. Without him there would be no Bill Wren Music I don’t pretend to be that talented. We have also gone into business together forming a production company (Ponder Dust Publishing LLC).” 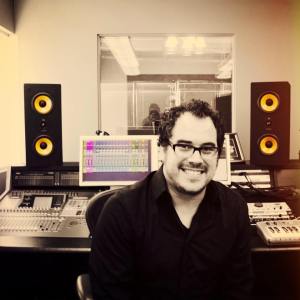 And according to Frank: “I’m very proud of our 2 previous albums hitting #1 (for a month each) and having singles that continue to play on Sirius XM (some of them now for years).” On this new release, Frank arranged, orchestrated, and programmed all of the pieces using the best that sample libraries have to offer today. In his words: “My approach was very similar to that of a composer scoring for film or television.” As well as working with Bill, Frank has done production work for Disney, including the Disneyland Tokyo Halloween Parade Music. He has also done vocal arrangements and production for Take 6 (the most awarded a cappella group ever, including 10 Grammys) as well as being a contributing composer to ABC’s new comedy “Dr Ken,” This barely scratches the surface of Franks extensive achievements in the music industry. For further info, visit his website. In addition to the dynamic duo of Bill and Frank, a number of exceptional accompanists lent their talents in the studio, and will be mentioned as we get into discussing the album tracks. So without further adieu, lets take our first steps on the Road To Chiang Mai.

The opening track, “Enchanted Kingdom,” is a name that is used to refer to Thailand, the country where Chiang Mai is located. Ethnic instruments and wooden flutes blend with lavish string arrangements, driving drum beats, electronic elements, and more to produce an elaborate cinematic production that brought to mind the grandeur of music from Yanni or David Arkenstone. It is quite an introduction to the album! The following song, “The Other Side,” is no less impressive, and also features the addition of ambient vocals from an all-star cast. According to Frank: “This song has three live vocalists, Grammy award winner Ben Bram who arranges and produces for Pentatonix, Tim Davis who produced and arranged much of the vocal work for all seasons of the TV series Glee and is also the vocal arranger and producer for the upcoming Barbara Streisand tour, and Aubrey Logan who was a contestant on The Voice several seasons ago, and is a rising star in the jazz world.”

The intricacy and detail on every track is so extensive that it would be impossible to adequately describe it for each song, let alone all of them within the scope of this article. So I will attempt to provide a few of the many highlights on The Road To Chiang Mai. Track three, “Ponder Dust,” is one of the two songs that Bill composed in memory of his wife’s passing. A bit less intense than the preceding tracks, it features the amazing violin work of Ann Marie Calhoun, who has performed with Mick Jagger, Pharrell Williams, Yanni, and many others. Ann also plays with a highly regarded group called The String Mob, who are heard on a number of the songs here, and whose credits include a Grammy performance with Justin Bieber, Ringo Starr, and Stevie Nicks, among others. Their tracks for this album were recorded at the studio of world famous film composer Hans Zimmer, who they also work with. An interesting touch on this particular track was the inclusion of backwards sound samples which provided a Beatle-esque psychedelic ambiance – very cool. 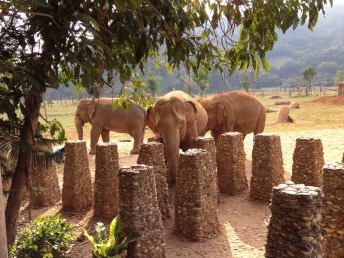 Interestingly, album’s title song is one of the more sparse and laid back tunes on the album. According to Bill, it is inspired by the experience he had with his new wife Tamara and the time they spent volunteering at Elephant Rescue Park in Chiang Mai. I particularly liked the blend of Micah Gilliam’s mandolin, banjo, and acoustic guitar with the ethnic instruments on the track. Another piece that reflects its Indonesian influence is “Land Of Smiles,” which like the term Enchanted Kingdom, is also a phrase that is used to refer to Thailand. However, a somewhat different influence is heard on “The Way It Was.” The distinctly Celtic sound of pennywhistle and harp that open the song evokes images of the Emerald Isle, far from the steamy tropical jungles of Thailand. But whatever its’ geographical or musical influences, the song is absolutely gorgeous, with strings adding to the emotional energy. The album draws to a lovely conclusion with “Today In Paradise,” which leaves the listener in a peacefully fulfilled state of being.

Another interesting aspect to this project is the video for “Enchanted Kingdom” (see below) and the album cover, painted by southern California artist Tara Ralls. As Frank explains: “While Tara began the painting the night before the film shoot, she finished it on camera (as witnessed amidst the unfolding story-line for viewers to see.)  We then took the finished painting and used it as our album cover. The colors within the painting drive the story line within the video, but they also have significance in Thai culture.” 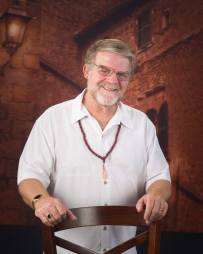 Perhaps the greatest challenge in writing this feature article is to do justice in describing the level of excellence of the composition, arranging, orchestration, and performance I experienced in listening to this album. I mentioned earlier about the incredible intricacy and detail of each song, and I cannot emphasize enough how impressive it is. The combined efforts of Bill Wren and Frank Ralls, along with a number of world-class accompanists, have produced an album that ranks with some of the finest I’ve ever heard in this genre. Road To Chiang Mai explores new musical terrain that is as exotic as it is eclectic. With elements of new age, contemporary instrumental, and world music, these lavishly orchestrated compositions evoke stunning sonic vistas that stir the imagination in their unique synergy of East and West.