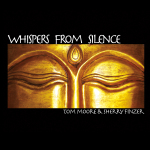 “All movement comes from stillness. All sound comes from silence.” These words from the back cover of the new album by Phoenix-based musicians Tom Moore and Sherry Finzer, set the stage for their collaborative music that “uses sound and silence to help facilitate a deeply meditative experience for the listener. Whispers From Silence is music that helps you shift your attention from the external world to a more subtle experience of ‘Feeling and Being’” according to Tom and Sherry. This project had an interesting genesis in that Tom had already written all the music (except for the flute solo’s) when he approached Sherry about working with him. They tested it out in a live performance at a sound healing event where Sherry improvised to these tunes. They both loved what was created in that moment and Tom invited her to be a part of this project and recording. 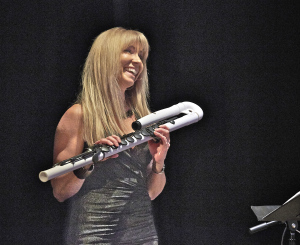 including solo albums: Sanctuary and Sanctuary II: Earth, her duo with Darin Mahoney: Transformation, a world music trio with Darin and Will Clipman: Trialogue, the Southwestern-flavored Christmas Picante, and an in-depth artist profile. In my interview with Sherry, she commented: “I feel very blessed to be on this musical journey. It has been such an awakening to go from being a classical flutist to what I consider mostly to be new age these days. It has brought me from playing and recording music by other composers, to creating my own music, to collaborating with others, which is what Whispers from Silence is with Tom. I believe that Whispers from Silence fits within the boundaries of music that can help to heal, with its deep meditational qualities.” In addition to recording and performing music, Sherry is the founder and head of Heart Dance Records as well as her promotion company, RS Promotions US.

Tom, who sometimes records and performs as Voyager Tom Moore also has a diverse career. As he shared in our interview: “ The music I create and play is intimately interwoven with my path as an explorer of consciousness.  I am the founding director of a business named SENSE of PURPOSE COMMUNICATIONS that shares ‘Pathways’ to live a purposeful and exceptional life, 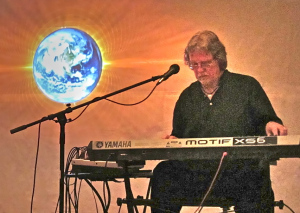 and my music is an expression or ‘pathway’ or communication. I try to integrate my work as a lecturer on consciousness, yoga instructor, meditation teacher and sound healing artist into my music journeys. I create, record, and perform ‘Space Music.’ It is music that intends to inspire us to move beyond our boundaries, and explore the timeless depths of space with a spiritual musical vision. My ‘Outer Space’ audio journeys express the awe of outer space and the excitement of the exploration of our physical universe.  This is music that I perform in my planetarium and space-themed performances. My ‘Inner Space’ music expresses an undercurrent of awareness and an inner spiritual presence through the use of sound and silence. And, I believe it is this spiritual dimension that gives transcendent and real meaning to our lives.”

There was something else in my interview with Tom that I found particularly meaningful as a new age music journalist. Over the years many people have asked: “What is new age?” Its not necessarily the easiest thing to give a quick explanation about, but I liked what Tom had to say in regard to this: “I have always defined ‘new age’ as realizing the unity in the diversity, and in knowing the One beyond all differences, and honoring the Spirit in every one of us.” He goes on to say: “Through my exploration of paths in life my music has evolved as a great allegory of moving out beyond our boundaries, and to the journeys that await within.” About the new release, Tom shared: “I had been working on the album concept and music for some time before I met Sherry, but her contribution to the album help take this music to a much higher and deeper experience.  Her melodies and tones blended seamlessly in the original direction I had for the album.” In addition to Sherry’s flutes on every track, Tom primarily plays keyboard synthesizers and samplers, as well as a bit of electric bass, guitar, and acoustic percussion. All voices and ethnic instrument sounds were played on synths and samplers.

The album opens with the tone of a soft temple bell on “Awakening Breath” and proceeds into a five and a half minute meditative flute solo, which helps the listener quiet their mind and settle into the musical spiritual journey that follows. According to Sherry: “The two solo flute tracks, ‘Awakening Breath’ and ‘Peace Within’ were inspired by Paul Horn and his album Inside the Taj Mahal. Tom did some research on how to create and duplicate that sound, and I believe he did a fabulous job with it.” And I would agree, as the expansive reverberant sound of the flute 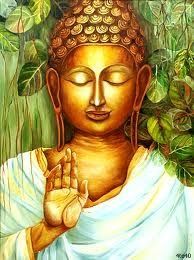 The mystical vibration of India permeates the next track with its Sufi-inspired title, “Toward The One.” Nature sounds blend with the drone of tamboura, sitar, tabla rhythms, and a haunting flute melody. As the piece evolves, electronic elements and ethereal choirs are added to the mix, making for a mélange of exotic sonic spices. As mentioned, this music flows from both sound and silence, and the album’s title track begins with a very spacious intro after the movement of the preceding song. Actually, the entire eight-minute length of it is quite meditative. The appropriately named “Infinite Space,” creates the kind of atmospheric aura that would make it a perfect fit for the kind of planetarium shows that Tom does, as drifting synth textures create a celestial backdrop for the deeper tones of Sherry’s Guo bass flute.

One of the song names has a particular significance, as Tom explains: “The title of track 6, “Yūgen” expresses the meaning of the album.  Yūgen is a Japanese word pertaining to a profound awareness of the universe, which evokes feelings that are inexplicably deep and too mysterious for words. The word itself is like an extension of awareness, the aesthetic perception which allows us to conceive of the vastness of the universe — but carries it beyond the rational mind into the mystical realm.” On “Peace Within,” Sherry’s alto flute is featured in the above-mentioned Paul Horn style and creates a transcendental space that is a perfect blend of sound and silence. The album draws to a peaceful conclusion with “An Ancient Presence,” whose combination of dreamy synthesizers, sonic pulsations, subtle percussion, and flute help take the listener on a cosmic journey through the album’s longest track. 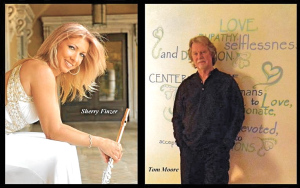 The 8 songs on Whispers From Silence range from approximately 6 minutes to 10 minutes, which adds to the meditative nature of the recording. The creative elements that Tom Moore and Sherry Finzer each bring to this collaboration lifts the music to rarified heights. The compositions evolve slowly allowing the mind to quiet as the listener is carried along in a flow of ethereal sound textures and spacious drifting flute. Whispers From Silence is a deep and expansive listening experience that makes a perfect soundtrack for an inner voyage.