When David Franklin was just 9 years old, he made a promise to himself that, in his life, he would never miss a day of playing music. Keeping that promise, except for a few days of illness or travel in the past 40 years, David calls his eighth, and newest album: “… the culmination of all that playing.” While many musicians choose an instrument, often early in life, and stay with it for their entire career, David’s musical path has been diverse. Starting with drums in fifth grade, he soon branched into guitar and songwriting, and later into piano and voice. He played in many bands throughout high school and college while earning a Bachelors degree in Environmental Science. His concern for the environment has led him to be an activist and in 1990 he joined 90 other environmentalists in The Global Walk for a Livable World, a one-year hike across the country to raise awareness about these crucial issues.

I was intrigued by the title of this new release and its cover image. In an interview with David, I asked him what it means to 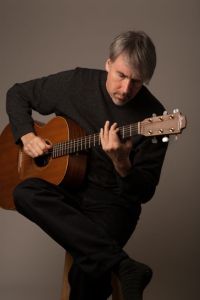 him. In his words: “The title of Playing With Shadows refers to what we humans often do, and what I certainly did for a long time: I hid the parts of me that were vulnerable, and in ways scary to me…and they became my shadows. With this album, I am allowing them full expression, and playing with these shadows, musically and otherwise. Not surprisingly, I’m also allowing myself to be myself in other aspects of my life and enjoying that too.” David hopes that his music “will help listeners connect to their inner feelings and ultimately, create more of a sense of connection in their lives.” The psychological perspective of David’s response reveals yet another facet of his life. He later returned to grad school and earned his Master’s Degree in Counseling and went on to become licensed as a Marriage and Family Therapist, specializing in working with teenagers, and often incorporating music into his work. David’s music and his work as a therapist comprise the yin and yang that create the wholeness of his professional and creative life.

Playing With Shadows has a generous 18 tracks, 10 of which feature fretless bass maestro Michael Manring, who is considered the premier bassist in the new age music genre. Interestingly, David was greatly influenced by the innovative guitar playing of Michael Hedges, who along with Mr. Manring were early luminaries on the Windham Hill label. At one point in the 80’s David found that playing the guitar was not fulfilling for him anymore and was ready to give it up. However, after hearing Michael Hedges, he felt like he had “found the spirit of the instrument.” According to David: “For that reason, it’s truly been an honor to record with Michael Manring, who was Michael Hedges’ partner in many ways.”

While we’ve been talking about David’s focus as a guitarist, this album actually opens with a lovely solo piano composition entitled “Living In Interesting Times.” David describes this piece as being “inspired by exploring the bounds of time…there is no real time signature for that song…it’s constantly changing from 5/8 to 3/4 to 11/8 and I don’t tend to play it the same way all the time. In many ways this is like life for me because it flows like a stream and yet while the pattern changes, it’s always the same song.” The second track is also a piano composition, and its not until track three that we hear David’s guitar. This fingerstyle acoustic guitar piece called “Giza” is the first duet with Michael Manring, and is absolutely exquisite. On part of this song Michael uses a hand-held electronic device called an E-bow, which is held over the strings and provides infinite sustain. These are more commonly used with electric guitar, but being the innovator that Michael Manring is, his use of it on fretless bass is groundbreaking. At times, his long deep notes, almost sound like whale songs echoing across the deep. 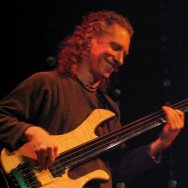 I appreciated the interplay between the two musicians, and particularly liked when they played phrases in unison. Another thing I appreciated is that on the many albums produced by Windham Hill Records founder Will Ackerman that feature Michael Manring as an accompanist, his bass playing is often understated, while on this album with David Franklin, he seems to have freer reign to unleash his stunning virtuoso playing techniques. Of course the sound quality and production on Playing With Shadows is superb, having been mixed and mastered by Warren Kahn, one of the finest engineers in the San Francisco Bay area at his Banquet Studios. Warren has a long history of working on projects by some of the top artists in the new age genre.

Several of album’s compositions are placed side-by-side and serve as Part One and Part Two of a theme. “Shifting Landscapes – Dawn” and “Shifting Landscapes – Dusk” represent “how music, journeys, and life go through different stages and phases, evolving, shifting, changing.” And speaking of duets, the later of these two tunes feature David on piano playing with Rick Corrigan on accordion. I was glad I read about that beforehand, as Rick’s single note melodies, for me, evoked the sound of a horn or woodwind instrument, more than the sound usually associated with an accordion. It’s quite an engaging composition and David’s piano work is expressive and flowing.

On the appropriately titled “Song For The Dreaming,” David plays both piano and guitar, along with Michael’s bass, resulting in a gorgeously light and airy musical journey that David originally wrote to play as a lullaby when tucking his young sons into bed. Another bookend pair of songs is represented by “Falling Slowly” and “Falling Fast,” whose tempo and feel are befitting of their titles. I was impressed with the dynamics and thematic evolution of a song called “Not Just A Walk In The Park,” which according to David represents: “an adventure I had with some friends when we got profoundly lost in a forest and wondered if we were ever going to find our way out.”

Among my favorite songs is “Rolling,” which for me, really highlighted David’s fluid guitar playing as well as his skills as a 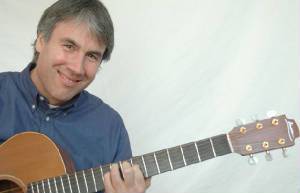 composer, with its intriguing chord progressions and evolution through various movements. Along with Michael Manring’s exquisite electric bass, David adds a track of piano to complete the mix. The fact that he is equally accomplished on the keyboard as on the fretboard is evident throughout the album.

An interesting aspect of this album is reflected in David’s sharing that: “Someone once told me not to be afraid of silence in music and that always stuck with me.” As he explains: “On this recording I played with silence a lot.” A good example of this is a tune called “Forgotten Memory.” He goes on to say: “I specifically wrote and arranged these pieces to feature space, openness and simplicity because I felt it gave the music more emotional resonance. I also wanted to move through different musical spaces which is why I varied the instrumentation.” A very special guest joins David and Michael on the wistful and dreamy, “Goodbyes” – David’s teenage son. Alex Franklin, who plays guitar in a rock band, adds his spacey electric guitar lead and echoed accents of cascading notes, giving a slight hint of Pink Floyd vibe in that section – very cool. The album’s title track is quite emotionally evocative, and having read David’s inspiration for the title, it had a special resonance for me.

The album draws to a close with a delicate piano solo, which has a compelling story behind it. According to David: “A Final Song” is a piece I could never really write: the mics were set and when I was testing levels, the recorder was rolling and I wasn’t conscious of this fact. So I just played/improvised this complete piece on the spot. To me, it’s an example of what I/we could do if we became present, without allowing our egos to get in the way.“ Along with the story, this song made for a perfect ending to this lovely album. David’s abilities as a composer and multi-instrumentalist shine throughout the18 engaging tracks of Playing With Shadows. But in addition to David’s musical gifts is his heartfelt desire to, in some small way, make the world a better place.

David shared some of his thoughts with me in our interview, and they seem to be an inspiring way to end this feature 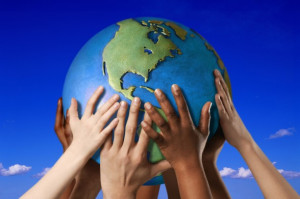 article. In his words: “Many of these songs remind me of people and connections in my life and many of these songs are played and inspired by a hope that we humans can figure out how to heal this planet and the many messes we’ve created, environmentally and otherwise. Even though I’ve studied Environmental Science and work in the healing arts, words fail to allow me to deeply express these thoughts, ideas and hopes…but the music I write (and now, allow) seems to do this for me somehow. My sense is that music is many things beyond sound…it’s about connection, communication, and it’s ultimately about healing. To me, music is medicine.” 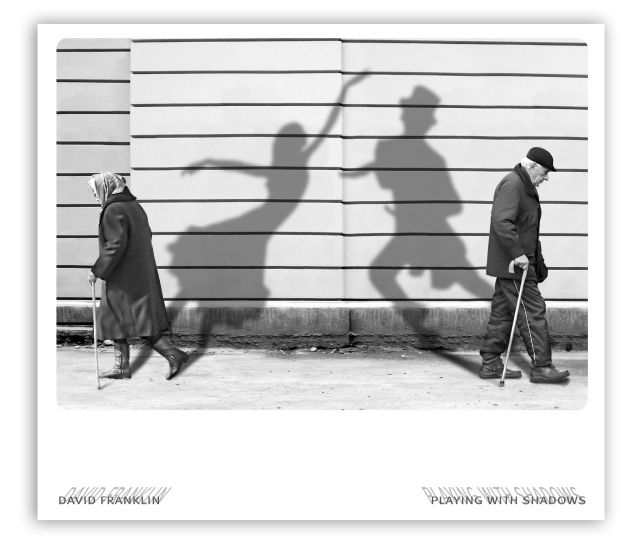