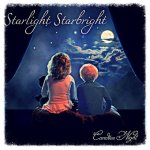 Award-winning vocalist, multi-instrumentalist, and lyricist Candice Night is certainly no stranger to the pages of Music and Media Focus. She has been best known for almost two decades as a primary member of the hugely popular band Blackmore’s Night, along with her husband and ex-Deep Purple guitarist, Richie Blackmore. Their alchemical brew of Renaissance and Medieval music, Celtic, English folk, and rock influences has generated millions of adoring fans around the world. Over the past few years, I’ve had the pleasure of writing about a number of their albums, including All Our Yesterdays, Dancer And The Moon, and Autumn Sky. However, Candice is also a solo artist and I previously wrote a feature article on her exquisite debut solo album, Reflections. This time, she has returned with a new release and a new focus. Appropriately described as “music to dream by,” Starlight, Starbright, is a children’s album of lullabies.

The album was inspired by the birth of her two children, and she began working on this project while she was pregnant with the first. In her words: “I really felt just so completely full of love and part of this bigger picture, this miracle. I wanted to sing to celebrate this incredible life that was occurring inside of me. I’ve never felt so spiritual.” Candice goes on to share her motivation in creating this album: “I still sing my children to sleep each night and my friends said that they would like to sing to their kids but aren’t happy with the way their voices sound when they sing. So I recorded this CD to relax to for adults and also to put their children 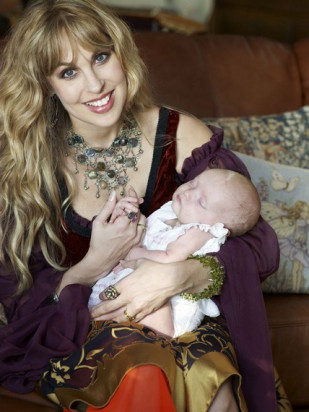 to sleep at night. One of the songs was written by my daughter when she was 1 and a half. And we have recorded 2 videos already.” The CD comes with a 20-page full color booklet that in addition to containing the song lyrics also includes a selection of sweet bedtime stories that parents can read to their children.

On this album Candice lends her ethereal angelic voice to an interesting and diverse blend of songs that include original tunes and traditional lullabies, as well as covers of “Annie’s Song” by John Denver, “Return To Pooh Corner” by Kenny Loggins, and Disney favorite, “This Is Love.” A number of the songs draw from regional fairy tales, myths, and legends. In addition to Candice on vocals and woodwinds, the musicians include Pat Regan on keyboards and orchestral arrangements, Claire Smith Bermingham on violin, and Richie Blackmore on guitar.

An occupational hazard of writing about an album of lullabies, especially when sung by such a heavenly voice, is to doze off while listening. Although I suppose in some way, that would be a compliment. However, I’m pleased to report that I was able to remain conscious throughout, although incredibly relaxed by the end. The album gets off to a “rocking” start (in a manner of speaking) with “Rock a Bye Baby.” Candice sings the first verse a-cappella, before being joined by gentle acoustic guitar and flute in a style reminiscent of the quieter moments of Blackmore’s Night. This is followed by one of Candice’s original compositions entitled “Robin Redbreast,” that highlights her talents as a storyteller in song. It’s a lovely little tune that features an intriguing story, exquisite orchestration and an evocative chord progression.

With simple piano accompaniment, Candice sings one of the most well known songs on the album, “So This Is Love,” from the Disney animated version of “Cinderella.”  On this song, as well as others, I liked the way that Candice utilizes multi-tracking on her vocals to create harmonies or a choir-like effect. Another popular song cover is John Denver’s “Annie’s Song,” that most people will recognize from the opening lyrics: “You fill up my senses/ like night in a forest/ like the mountains in springtime/ like a walk in the rain.”

One of Candice’s original tunes, “Lullaby in the Night” has an interesting origin, having been created by her daughter Autumn when she was just one and half years old! As Candice tells it: “I walked in one day and she was singing this beautiful song to her dolls as she lay them down to sleep. I recorded it on video without her knowing it and the song has always stayed with me since that first moment I heard it.” Not bad getting your first songwriting credit before your second birthday. But I guess its no surprise that children born into this talented family would have inherited the music gene.

One of my favorite songs on the album is Candice’s charming version of “Return To Pooh Corner” by Kenny Loggins. The enchanting harp accompaniment lends a fairytale dimension to this sweet rendition. I also really enjoyed the original song, “Once In A Garden,” with its portrayal of the innocence and fantasy world of childhood. A nice touch on the classic “Baby Mine,” was the delicate music box tones that introduce the song and accompany Candice’s voice as the song evolves, eventually adding fuller orchestration. The album draws to a peaceful conclusion with “Misty Blue,” an original tune by Candice and Richie that features acoustic guitar and vocals in a simple arrangement.

If there is anyone who is perfectly suited to create an album of lullabies, it is Candice Night. The angelic ambiance of her voice and the magical music that accompanies her, spin an enchanted web of fantasy that is sure to help the little ones drift sweetly into dreamland. The nurturing energy Candice has with her own children comes through in the 12 songs on Starlight Starbright. The album also presents an opportunity for parents to share special moments with their children, not only with the music, but also through reading the delightful bedtime stories included in the liner notes. It’s a pleasure to see Candice Night expanding her already impressive creative talents into new musical directions as she does so expressively on Starlight, Starbright.