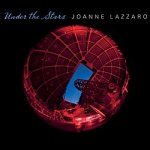 There have been many solo flute albums over the years, but perhaps the most seminal in the new age genre was the iconic Inside, recorded by Paul Horn in the Taj Mahal back in 1968. Its natural ambiance and reverberation gave it a dimension that enchanted listeners. Since then numerous albums have been recorded in a wide variety of settings including cathedrals, caves and caverns, in the Great Pyramid, and even while rafting down the Colorado River in the Grand Canyon as The Paul Winter Consort did in 1985. Inspired by the original Paul Horn recording, flutist Joanne Lazzaro decided to do a solo flute recording in a unique and sonically resonant setting: the 100-inch telescope dome at the historic Mount Wilson Observatory in the San Gabriel Mountains outside of Los Angeles.

According to Joanne: “I wanted to capture a completely improvised, live musical experience that was specific to the place, the time, and the amazing acoustical properties of the building itself. For this project, I decided that the musical themes for the improvisations would be based on or 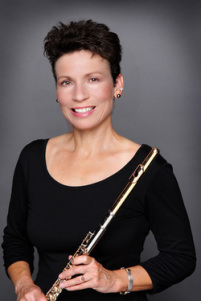 inspired by the night sky, in particular on the star legends of various Native North American tribes.”

Being an avid astronomy buff, the observatory was the perfect place for Joanne to record. As she explains: “I decided to call this album Under the Stars since so much of my own ‘world flute’ playing evolved literally during star-gazing sessions, while camping all over the southwest, at star-parties, and in observatory domes. When people think of “space”, some people hear sweeping orchestral music, some hear eerie synthesizer tracks, but I hear a lone flute, singing out in the darkness. And the choice of Native American star-lore also seemed natural, since my music comes very much from my experiences while travelling through the southwest- California, Arizona, New Mexico, Utah, and Nevada.”

This experience was quite different from the other musical contexts Joanne has been involved in. A classically trained flutist, Joanne is a member of the Los Angeles Flute Orchestra which covers a range of styles from neo-classical to jazz to world music. She is also Principal Flute for the Beach Cities Symphony Orchestra. Joanne has played all over the USA: Los Angeles (Disney Hall), New York, Chicago (Symphony Center), San Diego, Philadelphia, and New Jersey as well as Australia, Belgium, Chile, France, Germany, Italy, Monaco, & the Netherlands. Joanne started taking flute lessons in public school when she was 10 years old and went on to receive undergraduate and graduate degrees in music. Over the years she has played and accumulated a

wide variety of flutes from around the world. However, one in particular, a Native American flute she saw hanging on a wall in a gift shop in Boulder, Colorado, made a huge impression on her, and after hearing the music of R. Carlos Nakai, she was hooked and took it upon herself to learn the subtleties and nuances of the instrument. Joanne recently won a Global Music Award in the Native American Flute category.

As I mentioned earlier, recording Under The Stars was a different kind of experience compared to the more structured musical situations Joanne plays in. In her words: “Sometimes when I listen to a “world music” or “new age” album, I hear a lot of creative production value. So many recordings are beautiful, smooth, complex fantasies that never existed until the final album mix. But I feel something spontaneous, vibrant and maybe a little ragged in live performance, and I wanted to capture that feeling.” (Perhaps what Neil Young refers to as “ragged glory” in describing his live music). She goes on to say: “I knew going in that this was not going to be a “perfect” album. I was committed to capturing as much of the reality of the performance as possible. I wanted the listener to feel that they were standing in my shoes, under the 87-ton telescope, and it’s dark, it’s cold, the stars are shining, and there is this amazing natural echo.

Playing a musical instrument in such an immense and highly 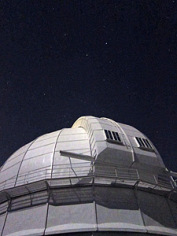 reverberant structure as this is not as simple as just picking up your flute and pressing “record.” The building itself is very much a factor in how the music is played. As Joanne explains: “In the case of a live recording in a location with a very pronounced natural echo, the echo itself becomes part of the melodic structure – I would literally being playing duets with myself. And because the echo would always have the same speed & delay factor, I would need to adapt my playing style to work with that consistent echo pattern. This meant that I would avoid certain types of melodic ornaments or rhythm patterns that I felt would come out muddy or blurry, and favored a more song-like style that left breathing room for the dome’s echo.

As mentioned, these songs are spontaneous creations, and as Joanne shares: “Even with all of the pre-session planning, each tune was in fact completely improvised in the moment, and I made some on-the-spot changes to the planned melody ideas based on my mood during the session (or the good or bad behavior of particular flutes.) The opening track is appropriately entitled “Evening Star Song.” As the lovely Native American flute melody drifted from my speakers, it occurred to me that listening on headphones might capture more of the ambience. Once I made the switch I did indeed have more of a sense of being there, especially listening with eyes closed. The natural reverberation of this huge dome with the notes wafting out into the space was a perfect match for the purpose which the building is intended; to explore the vastness of the universe.

It was interesting to hear how the different flutes Joanne played sounded in the acoustic environment. Compared to the cherry wood Lakota flute in the first track, the walnut bass flute in the next song, “Sky Chief,” had a deeper fuller sound. On “Moon Dances With New Star,” the way the echo interacted with the custom 6- hole concert tuned drone flute created a kind of doubling effect that almost sounded like two flutes playing in unison. Joanne utilized a different kind of trill technique in her playing on “Giant Cactus-Gathering Hook,” that gave a fluttering effect to the sound.

The wistful strains on “Path of the Departed Souls,” fits perfectly with the legend that inspired it. As Joanne explains: “Various tribes including the Shasta, Ojibway and Menominee, believe that the Milky Way represents a trail taken by the souls of those who have passed on. I chose a wandering, unsettled melody to describe the mysterious journey.” While, for the most part, the songs on this album are related to Native American lore and sky themes, the enigmatically titled “Bear Who Wanted a Mango” has a different inspiration according to Joanne: “The bear plays an important role in the lore of many tribes, however this tune was inspired by a local Mount Wilson bear. The observatory galley had recently been broken into by a California brown bear who tore out an air conditioner and in broke in through a window in order to snatch a ripening mango from the kitchen counter, leaving a wake of casual destruction. When I first picked up this flute, I immediately heard a song about a bear.” A very different animal spirit is evoked in “Rabbit Tracks,” whose short hopping notes allowed the dome acoustics to play a greater part.

In addition to Joanne’s original improvised performances, the album also includes two “cover” tunes. The first being her version of the iconic “Amazing Grace – Trail of Tears. This hymn was sung by the Cherokee as they were forced to march from their ancestral lands to a reservation as a result of the Indian Removal Act of 1830. The harshness of the march and cruel conditions led it to be called the “Trail of Tears.” Here, Joanne uses a double flute to represent opposing forces, which creates a choir-like effect. The other cover song is “Zuni Sunrise (Extended Version) which is a traditional tribal song that, at over 8 minutes in length, is the longest piece on the CD.

This album, which was recorded live on location in one take per track, and no studio effects or 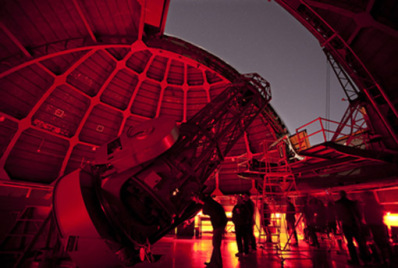 overdubbing has been described by listeners as “haunting,” “ethereal,” and “moving,” and I would most certainly agree. Recording an album like this was certainly a bold and adventurous undertaking, not only in regard to the technical aspects, but also for the fact that the 40-degree nighttime mountain temperatures in the dome made for some challenging playing conditions for Joanne. Under The Stars represents a fascinating interaction between artist and environment. Listeners who enjoy the classic Paul Horn recording as well as the music of artists like R. Carlos Nakai, Coyote Oldman, and Mary Youngblood will find a lot to like in this enchanting album that combines the earthiness of the Native flute and the vastness of the infinite sky.