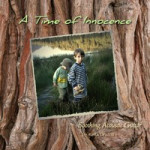 I can imagine the look of surprise and joy on Keith Driskill’s face at the tender age of ten, when he came home to find the gift of his first guitar waiting for him after “hounding poor ol’ dad to death” for it. Although he was sure that his parent’s expectations were that his fascination with the instrument would be short lived, now so many years later, with four sons of his own, he is still playing with passion and dedication. “A Time Of Innocence” is solo acoustic guitar played fingerstyle, which means it is plucked in melodic patterns sometimes intricate and sometimes simple, rather than strummed. It is also instrumental, although it conveys a meaningfulness that speaks directly to the emotions rather than the analytical mind.

From the first notes of the opening song “Miracle Of Forgiveness” I felt deeply moved and it set a tone that continued throughout the recording. This music has a lot of what I would call “heart quality” and I kept thinking that this particular song would make a wonderful soundtrack to a tender moment in a movie. I have to agree with multi-award winning record producer/arranger and composer Greg Hansen who said, “”Keith’s instrumental acoustic guitar album captivates and inspires without words. With trademark hook motifs, well-thought out progressions, and enthralling subtlety, he can transport the listener to places and emotions both uncommon and serene.” In fact, the word “serene” is probably the one I would choose if I had to pick one word to describe “A Time Of Innocence.”

Keith’s music which has been described as “new age with a touch of folk” has a natural earthy feeling and flow that I’ve always enjoyed in classic Windham Hill albums over the years. While an accomplished player, you don’t get the feeling that he is trying to dazzle you with virtuosity, but that the music is there to express something more sublime. There is a spirituality that comes through in his playing and is further reflected in his belief that, “music should be there to lift us, to deepen us and awaken us to a consciousness above the mundane routines of life.”

While there are nine songs on the album, there are not the kind dramatic shifts or stylistic changes that would make a track-by-track description as necessary. However, it is exactly this quality that gives the album a comforting sense of continuity. Although the CD is relatively short, clocking in at around a half an hour, I could easily see hitting the “repeat” button and letting it play over and over in the background without getting tired of it. Like the title implies, this is a sweet gentle recording that would be perfect for starting the day, winding down in the evening, or whenever a peaceful musical oasis is desired.