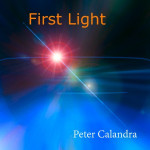 With over 25 years of playing keyboards in major Broadway productions and 15 years of composing music for Hollywood films and network TV, Peter Calandra brings a level of experience that many musicians only dream of to his latest album, First Light. Above all, Peter is a storyteller in song and his music lifts the listener out of their everyday world on an imaginative flight of fantasy. Blending new age, neo-classical, and smooth jazz influences, Peter’s creative compositions are as emotionally evocative as they are technically brilliant, striking the perfect balance between form and feeling. In addition to piano and keyboards, Peter also plays electric and acoustic guitars, synth bass, acoustic percussion, as well as doing percussion programming and digital sequencing. A number of fine musicians also accompany Peter on some of the tracks.

I cannot emphasize enough how much the above brief description of Peter’s experience in the music industry barely scratches the surface. For further details on his incredibly impressive career, see my feature articles on two of his previous albums, Inner Circle and Ashokan Memories. Both of those recordings were excellent albeit a bit different from each other. On First Light, he points out yet another distinction: “With this album I wanted to construct music that is more focused on the compositions and not on my piano playing. While the piano is prominent in almost every track, there are no jazzy technical solos like on Inner Circle or Ashokan Memories. I want the music to be more emotional and direct. As with all the music I write, telling a story in sound is very important to my creative activities. When I was younger and studying jazz piano the one thing stressed to me by my teachers was to always ‘tell your story’ while playing.”

However, some of the music that Peter writes is not about telling his story. As he explains: “I love writing music for films 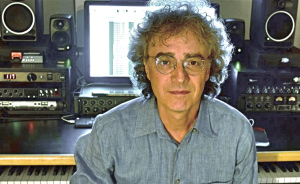 and composing and recording those compositions. In another arena I work in it is extremely satisfying to hear my music as part of something bigger. For example, the FIFA World Cup Theme I wrote for FOX Sports was heard by over 25 million people on the night the USA Women won the cup and became part of the history of the broadcast. Over the 6 weeks of the broadcast it was heard by millions more people and my Sound Cloud page that I have the theme up on was getting hundreds of listens a day, as people were searching it out.”

But for now, lets get personal and delve into some of Peter’s own stories that he tells on First Light. Listening to the first track, “Open Your Heart,” Peter’s experience as a film composer is evident in the way he builds his composition. Beginning with a simple piano melody set against a metronomic marimba sequence, the piece evolves to a point then comes to a pause before jumping into a whole other space accompanied by a powerful string section composed of violin, viola, and cello played by Ralph Farris, Ragga Petursdottir, Junah Chung, and Peter Prosser, who perform on a number of other tracks as well. This movement builds until again, it comes to a stop before elevating to the next level, and then back down once more. This is not an easy thing to do effectively, yet Peter makes it seem effortless. It reminded me of the way the music in a film can shift suddenly yet maintain a coherent flow. 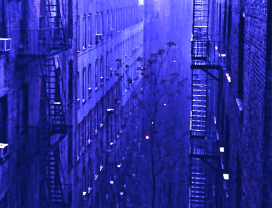 The next track, “Night City,” actually is from a film soundtrack. According to Peter, this piece is a modified version of a theme from an ESPN film he scored titled “Coach Bernie.” As he shares: “A few of these tracks are expanded and reworked versions of cues from films.” As the song’s title implies, there is an upbeat urban feel to the music that pulses powerfully along. Its’ definitely not your dreamy new age vibe, even though the music falls into the new age category. However, this is a very expansive genre that can easily accommodate some of the more high velocity compositions of artists like Yanni, Vangelis, and Tangerine Dream. Things shift quickly though, as we move into the title track, which evokes a more gentle pastoral vibe, capturing the beauty of a sunrise and the promise of a new day. Some lovely flute work by Kathleen Nester, oboe by Julia DeRosa, and Joy Askew’s ethereal background vocals accent and enhance this lovely piece. From the sunrise, we move into the other end of the day with “Sunset Sky.” This track is a toe-tapper, driven by earthy percussion and Peter’s rolling piano melody that reminded me at times of Bruce Hornsby.

The above-mentioned “dreamy new age vibe” is alive and well on a serene soundscape entitled “Valley Of Two Lakes.” 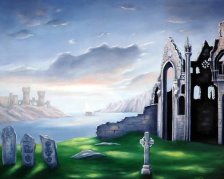 There is a real fantasy atmosphere created in this piece and a hint of Celtic influence with flutes by David Weiss, as well as harp, celestial female voices, and more. The yin yang relationship represented by this track and some of the earlier upbeat pieces highlight Peter’s range as a composer. A song called “Keep The Faith,” shares a bit of the solo piano style found on Peter’s previous release, Ashokan Memories. It’s an expressive etude that would not be out of place on a Windham Hill release. On “The Dream,” Peter goes ambient electronic with a down-tempo chill groove that I greatly enjoyed. A pair of tracks entitled “Inner Secrets” and “Circle The Time” lean more towards the new age side of the spectrum. Also along these lines is a minimalistic synthesizer piece called “Morning Star,” that is subtly accented on acoustic bass by Kermit Driscoll. Peter has chosen to bring the album to an introspective conclusion with a solo piano composition called “The Poet” that brought to mind jazz great Keith Jarrett. 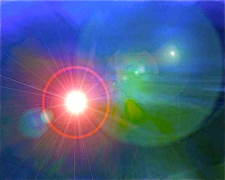 As we have seen, a lot of musical territory is illuminated in First Light. While this kind of diverse approach may or may not work on different albums, in this case it flows beautifully and feels like a complete body of work, highlighting Peter’s many creative abilities. Each composition is exquisite, yet just as impressive as the overall piece, is the attention to the smallest details heard on closer listening. I don’t know how many “wow” moments I had throughout the album, but they were numerous. Peter’s skills in arranging are among the best I’ve heard. His decades of experience of working in film, TV, theater, and more really shine through and elevate his music to the highest level. And I would be remiss if I did not direct the spotlight to Peter’s accomplishments, not only as a pianist, but also as a multi-instrumentalist. There is a degree of professionalism in Peter’s music and production that places him in the upper echelon of artists that I have heard in the new age genre. Before I run out of superlatives, I will just say that I am beyond impressed with Peter Calandra’s efforts on First Light.