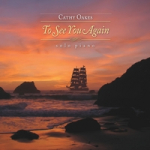 Although pianist Cathy Oakes  is relatively new to the world of recording, she has taught piano and voice for over 30 years. She released her first CD, Like a Song, in 2012, yet in the brief span of time since then, she has been prolific, and her new release, To See You Again, is now her third album. One would hope that as an artist progresses along their creative path, that there is an evolution, a deepening of their work. And this certainly holds true for Cathy Oakes. She makes a good point with regard to her music and relationships in general when she says: “When I meet a person for the first time, I don’t reveal my true, deep-down self. I don’t think any of us does that. We present our “outward” self. Only through getting to know that person, spending time with them, testing the waters, so to speak, do we begin to reveal the “inner” person that we are. We become more comfortable, feel more accepted, feel safer with that person and begin to reveal the deeper parts of our personality. It is the same with my CDs.”

Cathy’s first album was her “introduction” as a recording artist, both to the music community and to the world at large. Her main goal with that release was to be accepted as an artist on “Whisperings: Solo Piano Radio” program, created by well-known pianist, David Nevue. When Cathy was writing songs for her debut recording, she intentionally wrote with that in mind and created compositions, which she thought, would fit that mold. While she did become selected as a feature artist on the program, Cathy was surprised when particular songs were accepted or rejected in complete opposition to her expectations. Since her second album was a Christmas album, this third one is actually the sequel to the original music of her debut. But now, she chose to write from a different perspective than her introductory effort. In her words: “This time, I wrote using my own voice. It reveals more of the true me. I am a person of many moods and many emotions. I feel deeply. I am a woman, a wife, a mother, a daughter, a sister, a cousin, a pastor, and friend. Those feelings are shared on this CD. There is anger, frustration, sorrow, joy, wistfulness, homesickness, longing, love and worship expressed through the instrumental music on this CD. As I said, it’s much more ‘honest.’ It expresses who I am and what I feel.”

Some of that emotional range is portrayed in the first track, entitled “When I Am Afraid.” This composition was 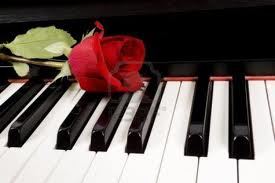 written when Cathy was going through a difficult time with one of her children and some of what she was feeling is channeled into it, as well as a sense of hopefulness, no doubt inspired by her deep spirituality. There is a nice sense of dynamics in the piece as it drops down into quieter, more introspective sections. Poignant feelings of loss are reflected in a number of songs such as “Cheryl’s Legacy,” “Farewell My Bonnie Lass,” and the title track, which pay tribute to dear friends and family who have passed on. The gently wistful strains of the title track are quite moving in their own quiet way. While Cathy’s playing style is not flashy or overly dramatic, I was impressed with how much feeling she was able to imbue her sweet melodies with.

Some of the personal challenges mentioned above in the first track are mirrored again in a composition called “The Tempest.” This one has a bit more of a minor feel to it and includes some intriguing chord changes and progressions. Its interesting how one person’s emotional experience can evoke resonant memories in another. A track called “Bittersweet,” was created to express the feeling Cathy had as she watched her adult children from the front window as they drove away after spending time together. That brought up a very old memory for me as I remember my own mother telling me the feelings she had watching me drive off to begin a new existence 2000 miles away in Denver, when I was a young man starting out in life. Listening to the emotion in Cathy’s song resonated in me and I truly felt her intent in this piece. While there are themes of loss and longing on this album, a track, which Cathy feels expresses her playful side and quirky sense of humor is “In The Key of Lost.” Its’ more bouncy and upbeat air do reflect another facet of her musical personality. 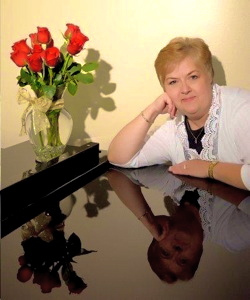 As a pastor and person of great faith, Cathy relies on her spirituality, not only in her daily life, but to help her get through the tough times. This particularly shines through on songs like “Under the Shadow,” “What a Friend,” and “A Prayer.” Cathy emphasizes that she has been honest with her feelings in the creation of this music and in her words: “This CD is much more emotional, darker in some ways and is not as “easy” to listen to. I think it requires the listener to engage. Good thing or bad thing? Only time will tell, I suppose. But it’s written from the heart and is expressed through my own musical voice.” I certainly didn’t find this music not “easy” to listen to. In fact, I thought it was quite lovely and I enjoyed it all. I appreciate that Cathy has followed her creative muse and produced a solo piano album of reflective compositions that I’m sure will find resonance in those who listen with the ears of the heart and soul.