When famed cellist Yo-Yo Ma refers to you “one of the greats in modern Celtic music,” you know you have reached a pinnacle in your music career. From the stunning album art of Across The Water, to the rich Celtic-tinged melodies contained within, Bill Leslie taps deeply into his Irish ancestry to offer 10 brilliant original compositions and two arrangements of classic tunes. Along with a hand picked group of world-class instrumentalists, this harmonic convergence of musicians create verdant soundscapes that range from haunting to soul stirring. In the tradition of veteran recording artist Bill Leslie’s many previous releases, Across The Water, is lavish listening experience that is at once earthy and ethereal – absolutely gorgeous!

However, being an acclaimed Celtic musician is not Bill Leslie’s only “gig.” He is, in fact, a five-time Emmy Award winning journalist and a veteran anchorman for CBS affiliate, WRAL Television in Raleigh, North Carolina. Over the years, Bill as won more than 80 major news awards including two Peabody Awards, considered the Pulitzer Prize of broadcasting, as well as having produced more than a dozen award-winning documentaries. Bill’s accolades don’t stop there however. His music has met with similar success on the charts, including international radio airplay, and awards too numerous to mention here.

In an interview, I asked Bill what led him to play music in this particular genre. As he related: “I fell in love with the music of 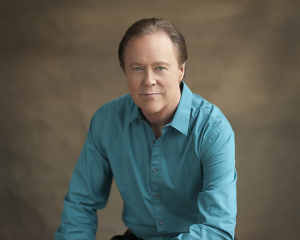 the band Nightnoise of Windham Hill fame, and became close personal friends with the band members especially Micheal O’Domhnaill and Brian Dunning in the 1980’s and 1990’s. Brian plays flute and pipes on three of the songs on the new album!”

Having written a feature article about Bill’s previous album entitled Scotland – Grace of the Wild, I was interested to know more about his recent trip to Ireland that inspired this new album. As he shared: “20 years of planning paid off. That’s how long I’d been preparing to visit Ireland. Something would always get in the way: A special job assignment, a tight budget, a major family event, etc. But in 2014 we finally made it to the Emerald Isle, and I am so glad we did. The beauty of Ireland exceeded even my highest expectations. And the history of this charming land is magnificent and humbling at the same time.” In his liner notes, he goes on to say: “These 12 songs celebrate the places that deeply touched my heart and the two sisters who share my Irish ancestry.”

So let’s grab a pint of Guinness, sit back, and enjoy an armchair adventure set to the soundtrack of Bill Leslie and company. The album opens, most appropriately, with the title track and sets the stage for our journey with its pleasant pastoral air. On this song, Bill plays guitar, Celtic whistle, and keyboard. As mentioned, a number of musicians join him. Among them is pianist Joseph Akins, whose own excellent album, A Southern Sun, I’ve had the pleasure of writing about, as well as having the opportunity to talk shop with him at the ZMR Awards in New Orleans. Other accompanists include John Brown on bass, Brandon Bush on accordion, violinist Jennifer Curtis, cellist Nancy Green, and Melanie Wilsden on oboe. These accomplished instrumentalists, as well as others appear on many of the tracks on Across The Water. 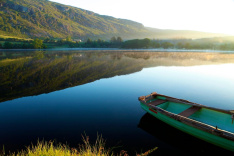 The next track entitled “The Boatman” is one of the two traditional, yet fairly obscure tunes on the album. It’s a lovely piece that captures that ineffable quality often found in Celtic music, which I can best describe as “bittersweet.” It has a beautiful heartfelt melody that flows over an emotional undercurrent of melancholy that is not uncommon in this genre of music. A song called “Connemara” reflects the beauty of that unspoiled place on the west coast of the country that has been called “the real emerald of Ireland.” Along with the aforementioned accompanists, the mellifluous flute of Brian Dunning also graces this track.

In a way, Across The Water reminded me of a book of short stories, with a number of tunes in two to three minute range, as well as a few longer songs. Although brief, each one told a complete story that felt perfect for its length. One of these is “Miriam,” which introduced the talents of Anita Burroughs-Price on harp, one of my favorite instruments. I particularly liked the way a track called “Gaelic Ghost” started out with Bill’s acoustic fingerstyle guitar creating an intro before the other musicians join in. Bill is a fine guitarist and it was nice to hear his playing on its own, even if briefly, as it is often well integrated into the mix. Here, through the magic of multi-tracking, Bill soon joins himself on airy Celtic whistles and keyboard as the ensemble kicks in on this mid-tempo ballad. I also enjoyed the intro to “Irish Girl,” that featured a moving duet between the expressive piano of Joseph Akins and Bill on the Celtic whistle, which incidentally, is a signature sound heard throughout the album.

A track called “Ring of Kerry” is named for a 179-km-long circular tourist route in southwestern Ireland. Bill described his 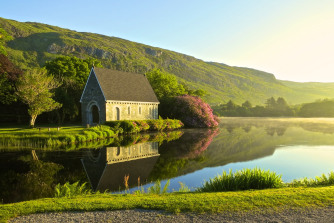 travels there in this way: “Country roads lined with walls of ancient stone led us southwest across the Beara Peninsula and eventually The Ring of Kerry. The journey took us past numerous historical ruins and the pretty pastels of towns.” It’s a lovely tune with a slightly more upbeat feel and adventurous spirit that I’m sure does justice to the scenic beauty of this area. The song that Bill had the most to say about in our interview was “Gougane Barra,” which he described in this way: “Gougane Barra in County Cork is an absolutely gorgeous and tranquil place. This mountain man felt right at home with the rhododendron in full bloom next to a 19th-century oratory on a lake. Gougane Barra was once the scene of a 6th-century monastery and is described on a historical marker as a holy and healing place. There is something truly magical about early morning light and the stillness of life in Ireland.” A bit of that magic is also felt in this heartfelt tribute to a special place. It’s obvious that Bill was moved by his experience there to create this peaceful portrait.

One of the things I was aware of with Across The Water was its consistency. It creates a particular ambience, style, and tempo range and pretty much maintains that throughout without any surprises or shifts, other than flowing from one delightful song to the next. There can be a comfort in that and, in a way, makes it a more meditative experience, even though it is not generally considered “meditation music.” But it is nice to be able to put on an album to create a particular space and know that it will be consistent. Bill Leslie has produced another gem for his catalog of beautiful acoustic music. Across The Water is a perfect blend of evocative songwriting, masterful musicianship, and emotional expression that I’m sure will appeal to a wide audience with its enchanting melodies.