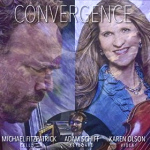 Quick, name your top 5 favorite new age violists. I’d be surprised if anyone could, as the viola is an instrument not as frequently found outside the realm of classical music. However, Karen Olson has been expanding the boundaries and application of the instrument into uncharted territory. Although her latest album, Convergence, may be classified as a new age recording, Karen’s background and musical career has been as diverse as you could possibly imagine.

For an extensive history and overview, please check out the comprehensive artist profile I wrote about her a few years ago. But for now, I’ll present a brief excerpt of it here: “From her years of performing in orchestras and chamber music ensembles, as well as in the New York Pops playing hundreds of shows with the likes of Frank Sinatra, Liza Minnelli, Sammy Davis Jr. and Tony Bennett, to her work with new age sound healing, jazz, and world music, the career and viola artistry of Karen Olson represents a veritable rainbow of musical experience. Education has played a significant role in her life, having earned a master’s degree from The Juilliard School, an additional master’s Degree from Yale and a doctorate from New York University. Further training in a number of holistic modalities such as Reiki and Theta Healing adds to the spectrum of resources she draws from in the many facets of her creative life.”

This last part about her focus in the healing arts represents a major aspect of Karen’s current music, and life’s 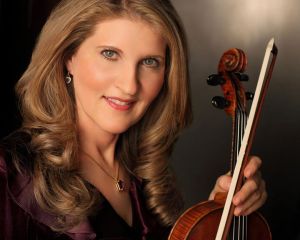 work. In our interview, Karen shared these words: “I would like for listeners to know that it is my deep desire and humble intention to connect with a Divine source of inspiration and energy that will be shared through the music. I believe in the energy and vibrational power of music, as a vehicle to shift people to a new place, especially when they are open and seeking to receive from a higher place. It is my goal that I myself am also an ‘instrument’ along with my viola.   The goal is to serve and reflect Divine love. I believe in entrainment and the power of our thoughts and influence we have on each other so I aim to keep my energetic level and intention as high as possible.”

I was interested to know what attracted Karen to the viola in particular. As she described: “I am drawn to the deep, resonating tone of the viola that is primarily in the range of the voice. I feel a soulful connection to the resonating tones and the aspect of a stringed instrument, which uses overtones that are so healing. I have heard (but need to research this further) that the viola utilizes more overtones than the other stringed instruments, presumably because of the range and the physical proportions. The viola has been the overlooked, misunderstood, and the ‘underdog’ of the string family so it feels fitting for me to explore new avenues for expression and exposure. It has always had a supportive role, traditionally and most often playing the inner, supportive voice rather than the melody. It was not seen as the virtuosic soloist (typically violin or cello), enjoying the chance to be in the limelight and ‘show off’. That suits my personality and intention – to support and serve others and not be the focus.”

One thing I found quite interesting is that with many of the classically trained musicians I’ve met, the word “improvisation” is often not in their vocabulary. Yet this Julliard graduate finds great freedom in letting her creative instincts and emotions inspire the music in the moment. One would be hard pressed to find a violist with such an expansive musical range. Since 2006 Karen has released five diverse albums, both solo and ensemble recordings with influences of Afro-Cuban, jazz-fusion, gypsy music, ambient/ new age, classical, pop, avant garde, world music, and Phillip Glass-style minimalism. Her latest album, Convergence, as the title implies, is a collaborative effort with two world-renowned instrumentalists, cellist Michael Fitzpatrick, and keyboardist Adam Schiff.

The album had an interesting genesis and evolution. As Karen tells it: “It actually didn’t start out with the intention of making an album, we were just getting together to jam and to see what would come from it. But I really loved the idea of editing and producing an album from the tracks (it did take me several years to get it all together.) Actually, a lot of the composition aspect was created in the studio, with the highly skilled engineer Juan Uribe.  It was a huge challenge because it was improvised live and there were no booths or separate tracks, perfection wasn’t our goal. I had to leave a lot of awesome phrases “on the cutting room floor” and find ingenious ways to put it all together. I found great inspiration during this entire process.”

The album opens, most appropriately, with “Sunrise’s Invocation.” The long sustained notes of the viola and 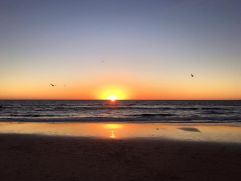 cello over a subtle background of warm keyboard textures create a perfect depiction of a new day slowly dawning. A more active ambiance is heard on the next track, “For The Kid At Heart,” where Adam switches to piano and the stringed instruments dance lightly and joyously around each other. A track called “Tailwinds” opens with a gust of energy as it blows through a spirited improvisation in this brief two-minute interlude. I will admit that at times, my ear was not discerning enough to tell the difference between the cello and the viola. But I soon realized that it didn’t matter and I just went with the flow, rather than trying to be analytical about it. Ultimately it is the interaction between them that was important. 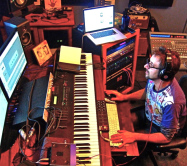 After the more subdued energy of “Listening Breaths,” which featured plucked notes as well as bowed sounds, is the title track. On this piece, Adam’s piano has a more prominent role than in preceding tracks, and is quite expressive in it’s haunting melody, providing a lovely soundscape for the strings to soar over. On “InterAction,” I appreciated the expansiveness of the first half where the space between sounds played an important part, before evolving into a more lively musical dialog as it went on.

I was intrigued by a sound on “Tending Grace,” that I assume was from a keyboard which sounded somewhat like a steel drum or hang drum and added a bit of different flavor to the improvisation. The interestingly titled, “Washing Tears,” had a wistful air that contrasted with propulsive forward momentum of the next piece entitled “Many Ways.” But perhaps my favorite track was “A Peace Of Paradise,” which closed the album. As the title might lead one to expect, a feeling of serenity is created that leaned more towards the new age side of the spectrum. For me, it evoked the image of a sunset, which perfectly bookended the album that opened with a sunrise.

In the liner notes it says: “Convergence is… bringing separate things together into one.” Karen has certainly done that in creating a meeting place for three exceptional musical talents. Each artist adds a distinct perspective to this exercise in pure creativity. The fact that the music was improvised in the moment is not something that is heard that often in a recording project, and especially among classically trained musicians. But it does make for an interesting listening experience in not knowing what will happen next, as well as knowing that it will never happen again in exactly the same way. Convergence is quite an unusual and adventurous album that will appeal to those who like to go with the flow and explore uncharted musical terrain.