While his new album is entitled Learning To Fly, guitarist/pianist/composer Neil Tatar is one of the most down to earth people you could meet – although his music certainly does have wings. Neil’s previous release and collaboration with cellist David Darling, Where Did The Time Go, was excellent, and those who are interested can click the link to read my feature article about it. With Learning To Fly, however, Neil has taken his music and collaborative efforts to the next level entirely.

I had the opportunity to sit down recently with Neil at the ZMR Awards in New Orleans and got the scoop on this new release and all that went into it. For starters, Neil made the decision to work with one of the most iconic studios and production teams that frequently serve the new age music genre. Imaginary Road Studios in Vermont is headed by GRAMMY winning producer, guitarist, and Windham Hill Records founder, Will Ackerman. Also contributing his 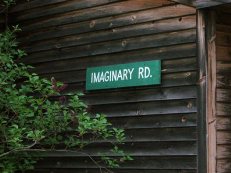 considerable professional expertise is producer, engineer, and multi-instrumentalist Tom Eaton. A number of Will’s A-list studio musicians are also featured. As Neil shared with me: “Working at the studio was an experience that I will always cherish. The level of support that ultimately was provided by Will and Tom Eaton was well beyond my expectations, and they both deserve a huge amount of credit for the end result of Learning To Fly.” Neil also acknowledges his wife Lini, in addition to Will for their support during the songwriting phase of the album.

Like myself, Neil started out as a guitarist playing blues, rock, and R&B before finding his way into instrumental new age music. Neil’s shift in direction was facilitated, in part, by his good friend and mentor David Darling. As Neil describes: “He offered me the opportunity to discover and to honor my own musical path, and opened within me the awareness that I could follow my own unique sound, which is what the listener is hearing on my albums today. I see music as a wonderful form of communication. It is my way of telling a story, and providing the listener with a palette that allows them to color in their own interpretation, while guiding them with my feelings and musical expression.” 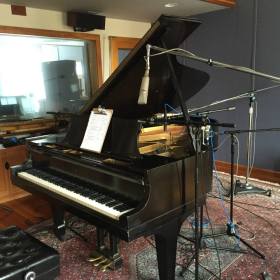 The famous Steinway at Imaginary Road

So what are some of the stories Neil tells with his music? Opening with a reflective pastoral piano piece called “Wait For Me,” Neil is joined by Paul Winter Consort member Eugene Friesen on cello, long-time Will Ackerman collaborator Jill Haley on English horn, and bassist extraordinaire Tony Levin, who performs with Peter Gabriel, King Crimson, and many others. While many associate Neil with the guitar, this lovely track illuminates another aspect of his musical spectrum. It’s not long, however, before the six-string sound of Neil’s acoustic guitar is heard on the laid back jazzy strains of “Breeze In Blue.” In addition to Tony Levin on bass, the track includes the airy ethereal wordless vocals of Noah Wilding, and the soprano sax of Premik Russell Tubbs, who has performed with major league players such as Carlos Santana, John McLaughlin, Jean-Luc Ponty, Jackson Browne, and many more.

As the title implies, “Ode To My Mentors,” is a musical tribute. In Neil’s words: “This is a piece that honors those who have guided and mentored me during my lifetime.” In addition to the aforementioned David Darling, Neil cites his parents “who offered support and encouragement to me while they were present on Earth, and now through the example they set in my memories.” It’s a touching piano-based song that is accompanied by Premik, this time on alto flute, as well as Eugene Friesen, Tony Levin, and percussionist Jeff Haynes, who has performed with The Pat Metheney Group. Neil’s compositional skills and piano work are exquisite and you really sense his heartfelt emotion throughout the piece. In fact, Will Ackerman described Neil in this way: “Neil Tatar carries the heart of a romantic around with him. His emotions are rarely hidden and seldom contained.”

On “Missing You,” Neil not only plays on the strings of his acoustic guitar, but on the heartstrings of the listener as well, in 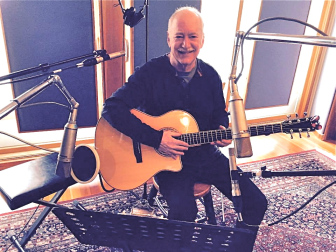 this emotionally evocative composition that memorializes his profound feelings about his mother’s recent and unexpected passing. In his words: “The beginning guitar passage is my mournful expression of missing her presence, and the gradual buildup to full instrumentation is an expression of honoring her rising spirit and the brightness of her memory. The title becomes clear to the listener as the meaning of the writing is disclosed.” It is a powerful and expressive homage that draws from a deep well of feelings. In addition to some of the previously mentioned accompanists, this track also includes the soulful violin playing of Charlie Bisharat, who is best known for his work with Yanni and John Tesh. As you can see by now, the description of the accompanists on the album as being “A-list” is certainly not hyperbole.

This is followed by the upbeat and exotic “Twilight Dance” which Neil describes as: “a connection to my ancestral roots, and channels a subconscious remembrance of a nocturnal dance experienced long ago. The swirling and driving music becomes a reflection of my own primal identity and honors generations from the past, watching folks moving in a frenzied yet rhythmic connection to the present.” A new instrumental voice heard here is that of fretless bass virtuoso Michael Manring who joins the ensemble. Also featured is a standout performance by Jeff Haynes on hand drums that energizes the piece with his propulsive rhythm.

The album’s title track, “Learning To Fly,” is about the proverbial “leaving of the nest,” and for Neil, “symbolizes recognition of opportunity and the excitement of exploring new horizons.” He goes on to say: “While writing this piece, I discovered the right hand that was played on piano began to express an image of a bird taking flight for the first time as it leaves the safety and comfort of the nest, while the left hand provides support and reassurance.” It’s primarily a piano piece with touches of sweet violin in places. One of my favorite songs, and perhaps the most unique on the album, is the bouncy Latin jazz-tinged “Summer Strut,” which features the maestro Ackerman himself on guitar along with a full cast of accompanists. It’s a real toe tapping “feel-good” piece, and serves to highlight the range of Neil’s music, from deeply reflective to exuberant and energetic. 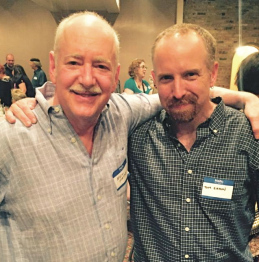 At this point, I want to reiterate that while Neil’s previous album with David Darling was excellent, this new release provides an even more colorful palette for him to paint his musical pictures. One of the trademarks of a Will Ackerman production is that of providing some of the finest studio musicians in the world, yet always in a supporting role, keeping the spotlight on the featured artist. Neil has taken full advantage of this scenario and totally shines in his interaction with the maestro Ackerman and company. I must also compliment the superb sound quality and mix that is tweaked to perfection by master engineer Tom Eaton. Learning To Fly certainly lives up to it’s title as it explores diverse musical terrain from a lofty perspective. Neil Tatar is an up and coming artist whose skills as a composer and multi-instrumentalist on piano and guitar provide a thoroughly satisfying musical experience, that will leave listeners eager to hear more in the future.