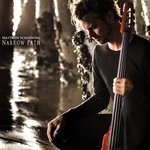 Mention the word “cello” to most people and the first association that comes to mind is European classical music. In fact Wikipedia describes the instrument as “used in chamber music ensembles, string orchestras, and as a member of the string section of symphony orchestras.” However, some people like to think outside the box and innovate in ways that expand our horizons. One such person is solo electric cellist Matthew Schoening (pronounced Shay-ning). The thought of an entire album or concert of solo cello may be yawn-inducing to some, but having experienced Matthew performing and having written about a previous release, I will quote myself by saying: “If you haven’t heard the music of Matthew Schoening you can probably take whatever preconceptions you may have about what a solo cello concert might sound like and toss them right out the window.”

Somehow, the idea of cello and high tech electronic devices don’t seem to go together, but Matthew is right at home with this esoteric pairing. He uses his futuristic-looking electric cello through a looping device that allows him to play a part, record it in real time, and then play over that one layer at a time, including melodies, harmonies, bass lines, and percussive rhythms, building up a complex composition that sounds like a complete band. It is quite astounding to listen to on his recordings, and even more so to watch him perform live. This is very different than the use of backing tracks to jam over, which has become popular. For Matthew, the technology is a compositional tool, creating a tapestry of looped layers, harmonies, and melodies.

According to his website, “Matthew has only two rules as a solo electric cellist: 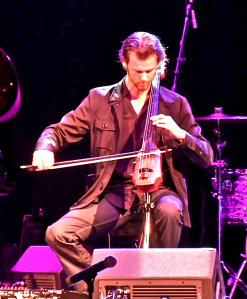 1) Whatever music he composes has to be able to be performed live, with no pre-recorded sounds. This means that what you hear on his albums is what you hear live. He starts with nothing, and builds everything, live, in front of you. Every performance is unique, and has it’s own flavor.

2) All of the sounds have to come from his electric cello. This includes all of the bass, percussion, and ambient sounds, which Matthew achieves through bowing, strumming, percussive, and pizzicato techniques, in combination with a unique proficiency with his effects pedals.

After performing on the popular TV program Entertainment Tonight, host Mark Steines commented: “Matthew had me at the first note! His music opens you and can make you vulnerable in a way I never knew possible. It’s as if you can see every note and feel every chord. And watching him perform is a sight to behold. There is truly an art to live looping and I am humbled by his mastery.” For those who would like an experience of Matthew’s live performance, his third album Elements was recorded in front of a live audience and presented uncut on the recording. Zone Music Reporter also named it as Best Instrumental Album of 2011. Matthew’s five CD’s have garnered a great deal of critical acclaim, radio airplay and chart success, some reaching the number 1 spot on the charts. Narrow Path may well be his best release yet.

The album opens with “Writing On The Walls” which builds on a propulsive staccato bowed phrase that makes for a dramatic entrance. As layers of melodic accompaniment are added to the mix, it’s hard to believe that so much sound is coming from one person, and on a cello, no less. On the next track, “Odyssey,” I particularly enjoyed the effect Matthew creates that sounds like he is bouncing the bow off the strings, rather than drawing it across them, to produce something like a cross between a bass and percussion. An interesting aspect of hearing his music on a recording rather than watching him perform it live is trying to guess how he is making some of the sounds. On “Structure,” one of my favorite tracks, Matthew seems to start off tapping out an up-tempo rhythm with his hands on the fretboard of the cello and then laying down a funky plucked bass line before picking up the bow to create multi-tracked melody parts. What’s cool is that he can also drop out particular loops, like the percussion or bass, to create a “breakdown” section, like those commonly found in electronic dance music, before building it back up again. A track called “Discipline” also follows a similar structure. 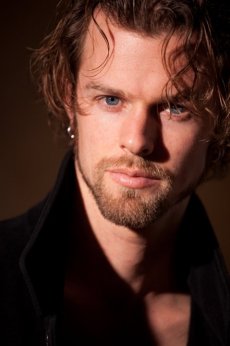 A very different ambience is found on “Faith,” which employs layers of synthesizer-like sustained notes to generate a more meditative atmosphere generally associated with new age music. Shifting to a lively upbeat mood once again is an appropriately named tune called “Frolik,” which to my ear, had a bit of  a Celtic jig feel to it. One technique that had me wondering how he did it was on the title track which starts of with what sounds like the sound of strummed guitar. The album begins to wind down on the last two tracks. “Surrender (Float)” is an absolutely gorgeous piece of ethereal ambience that I could put on a loop and listen to over and over. The vibe carries over to the last track which is an extended composition called “Breathe (15-Min. Meditation).” This is a drone-based soundscape, which opens with the cello evoking the sound of a tamboura – an instrument commonly heard in the music of India. The track unfolds very slowly and takes the listener into a deep peaceful state – a perfect way to end the recording.

The technique of looping has gained in popularity over the past few years, but I have heard very few musicians who have attained the level of mastery with it as Matthew Schoening. The use of it on cello is quite unique and really has to be heard to be believed. And speaking of unique, on the album release tour for Narrow Path, the option was open for up to 20 concert-goers per show to sign up and join Matthew in a special Chinese tea ceremony before the event. As mentioned earlier, I had the opportunity to experience Matthew in concert in the San Francisco Bay area where he opened for a group that included guitarists Todd Boston and Shambhu. I was not familiar with Matthew’s music at that time, however, within a few moments of him beginning to play, I became an instant fan. The range of sounds he is able to evoke out a single instrument is incredible – a cello, no less. Audience members were mesmerized, and I was certainly one of them. Matthew Schoening blends stellar musicianship with a command of technology that is awe-inspiring. I look forward to watching the growing and well-deserved success of this immensely accomplished instrumentalist.