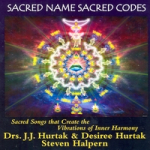 In recent years the number of albums being released which center on devotional singing, chanting mantras, kirtan, etc. has been on the rise. This is a good indication that more and more spiritual seekers are looking to sound and music that goes beyond entertainment, and which can be used as a tool for inner attunement. A new entry into this genre, although based on very ancient teachings, is Sacred Name Sacred Codes by Drs. J.J. Hurtak and Desiree Hurtak, that features a musical soundtrack well known new age music pioneer and sound healer Steven Halpern.

The album opens with a track called “Prologue,” set to Steven’s ethereal synthscape, along with soft female voices chanting the Divine Name of YHWH. This creates serene and sacred backdrop for an introduction and invocation, first by J.J. Hurtak and then by Desiree Hurtak speaking of the power of Sacred Language and its relationship to our Higher Self, the blueprint of our DNA, and more. Following this are 9 tracks of the Sacred Names chanted in Hebrew by the male voices of J.J. Hurtak, as leading Cantor, and Paul Thomas Burns, along with the female vocals of Desiree Hurtak, Anyah Dishon, and Mary Gilbert, all set to a Steven Halpern soundscape. The album concludes with “The Prophet’s Blessing,” which offers a prayer for the transformation of life and feeling the strength of the Covenant.

J.J. Hurtak beautifully chants the Sacred Names in a rich and powerful voice that along with the other voices form a majestic angelic choir that is quite moving and is further enhanced, or should I say entranced, by Steven’s celestial keyboard arrangements. Some tracks are more predominately female vocals, while some are more male focused, as well as those, which blend together like yin and yang. The use of reverb adds to the grandeur of the sound evoking the ambience of a vaulted cathedral. The album is beautifully recorded and produced, capturing the deeply spiritual intention of the project.

The CD comes with an informative 12-page booklet that delves into the science and metaphysics behind this music. I will say that this is not casual reading and can be quite deep or esoteric in places. Likewise, the music is not something one would put on while kicking back with a glass of chardonnay, but is a serious sound-healing tool for connecting with higher states of awareness, and seems geared towards those who are committed to their spiritual path and seeking advanced means of attunement. 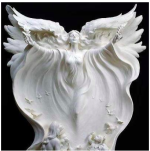 to them in an article of this scope. However, I’ll share a quote that will provide some degree of insight: “The Sacred Names of the Most High are included here to prepare us to think and work on many levels so we can create a holistic unity that reaches from the Universal to the DNA wave forms within us. The combination of the Names with music opens our mind to visualizing a cosmic frontier and thinking non-locally.

The music invites us to enter into the companionship of the Divine as we sing the Names with the angelic orders and feel the joy of being in orchestration and devotion as we move into the next phase of our spiritual ascension.” The Names on the CD are from J.J. Hurtak’s book entitled The Seventy-Two Living Divine Names of the Most High, which is a collection of Divine Names from the sacred scriptures of the Near East, first published in l973. 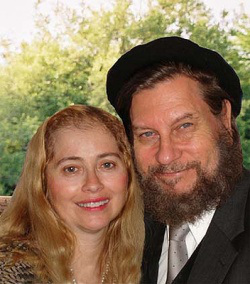 The album is subtitled: “Sacred Songs that Create the Vibrations of Inner Harmony.” J.J. Hurtak, Ph.D. is the author of several books, including The Book of Knowledge: the Keys of Enoch, translated into over twenty languages. He continues to participate in interfaith studies with leaders of all the major religions and has been an ongoing speaker at the Parliament of the World’s Religions since 1999.

Desiree Hurtak, Ph.D. is a social scientist and is the co-author with Dr. J.J. Hurtak of several books including A Commentary on The Gospel of Mary (Magdalene) and The Over-self Awakening. She has also produced several award-winning films.  Steven Halpern is a bestselling composer and recording artist of healing and meditative music who is considered a “founding father” of new age music. He was recently nominated for a Grammy for his hugely popular Deep Alpha CD, which blends healing music with sound technology.

Once again, the accompanying booklet provides information about each of the Sacred Names and is an invaluable part of the listening experience as well as furthering understanding about the meaning and intention behind the recording. While Sacred Name Sacred Codes can be esoteric to some, for those who feel the calling and find resonance within, it is a profound and divinely inspired tool for deep spiritual transformation.