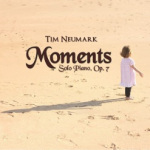 Award winning solo pianist Tim Neumark always chooses interesting themes for his albums, and his latest release, Moments, is no exception. According to Tim: “Life is made of moments. The best moments and memories aren’t necessarily the weddings, graduations, and births, but the smaller events in your life: your child dancing, pets greeting you at the door, a touching book or piece of music. With this album, I tried to reflect on some moments that have mattered to me.” He also shared that he hopes the album gives listeners time to reflect on their own personal moments.

I’m quite familiar with Tim’s music, having previously written an artist profile about him, as well as feature articles about two of his earlier releases, Galaxy and Storm. Readers who may be interested to learn more about Tim’s musical background, should check out the artist profile. If it seems like it hasn’t been a very long time between his last release and this one, that is true, as 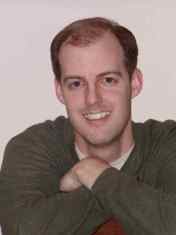 Tim explains here: “When I composed my sixth CD, Galaxy, I was secretly composing some tracks for Moments at the same time. I always had a goal to release my seventh CD a few months after my sixth, with no advanced notice or fanfare. In fact, only about ten people in the world knew that this album was in the works. The release date for Galaxy was May 1, and at that point I had composed five of the twelve solo piano tracks on this album. In all, I wrote 24 songs between September of 2014 and August of 2015 to produce the Galaxy and Moments albums.” It looks like Tim’s muse has been working overtime to provide him with inspiration.

In discussing the character of this album, Tim shares: “This album is similar in theme to my album Influence, which was inspired by people and places in my life. The difference is that this album is about specific points of time in my life. I think one inspiration for this title was the brilliant Richard Linklater movie, Boyhood, which showed how life is made up of moments…” In another comparison to one of his previous releases, Storm, which as the title implies, had a darker, more minor key feel, Tim describes Moments as “a lighter, happier, shorter, more major-key album.”

There are a few things in particular that I find interesting about Tim’s creative process. One is that he generally chooses a title first and then creates the music for that, rather than composing the music and then picking a title. The other is the overall structure that generally characterizes his albums. This includes starting with a lighter track that has an “introductory” quality to set the mood. From there, the music tends to become more dramatic and dynamic, followed by a light interlude leading into the second half of the album. He describes tracks 7 to 10 as generally “the most poignant.” 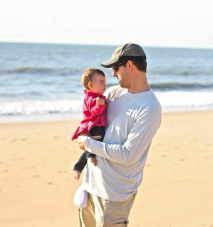 The stage is set with the opening solo piano track entitled “Beauty.” With its intentionally simple, yet graceful and heartfelt melody, it qualifies for his criterion of being “introductory.” Track 2, “And Then,” follows with more of a bittersweet vibe than the lighthearted feel of “Beauty.” The music interprets a true story about a man who talked to his daughter every day on the phone. Each call always started with the words “And then?” because he viewed each conversation as a continuation of the previous one. This story was told by the man’ daughter at his funeral after his unexpected death. What pained his daughter most is that there were to be no more “And thens.”

A much more lighthearted feeling follows with “Little Renée,” which was inspired by Tim’s then- 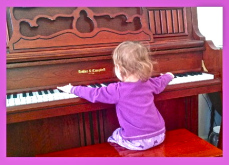 two year old daughter dancing around while he played the piano. I’ll admit that I was a bit perplexed trying to figure out what the unusual time signature was, until I later read that it was in 10/8. Having read thus far, it is not too hard to figure out what inspired track 4, “Daughters.” I really enjoyed the joyous uplifting energy of this song, and some interesting melodic and chordal changes caught my attention, on what was perhaps my favorite song on the album.

And speaking of “moments” in life, Tim describes an important one related to the song “Waiting for Ella:” My daughter Ella was born late! I had a concert scheduled for the night she was eventually born, and during that day I was pretty sure my wife would be in labor and I wouldn’t be able to play. So I sat at the piano and played this tune while we figured out what we were going to do. (I went to the hospital to meet Ella, I didn’t make to the show!)” The song is quite emotionally evocative, and Tim characterizes the end of the piece as “sure to be a tear-jerker to many listeners.” Even at this early point in the album, not even halfway through, from song to song, the range of Tim’s compositions and their emotional content is quite impressive.

With track 6, the focus shifts from Tim’s daughters to a couple of other beloved family members – his two cats, on “Eight-Paw Waltz.” Unlike a previously mentioned song, I had no trouble instantly recognizing the song’s familiar 3/4 time signature. Although, not being as well versed in classical music, I could never have identified it as the Dvořák Waltz in D Major, Op. 54 No. 4, with Tim taking liberties in the arrangement. The music is beautifully played and quite elegant, although I had to smile when I thought of it referring to the dance of excitement that Tim’s cats do when greeting him at the door. 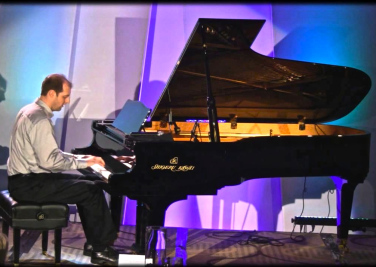 Here at track 7, we come to the “poignant” section of the album with a piece called “11 Seconds.” The inspiration for this one comes from a story that Tim had read about a young collegiate hockey player whose lifelong dream was to play hockey, and suffered a major spinal injury only 11 seconds into his playing career. As can be expected, there is great sadness reflected in Tim’s composition, where he makes dramatic use of space between phrases as a kind of emotional punctuation in this moving song. Interestingly, while the album is about the moments that make up a life, a track called “What If,” is “about memories that didn’t happen. What if things had worked out differently? This song captures the sadness of things that never were, or the relief that these things never came to be.” There is a dreamy feel to this song that while wistful, is quite lovely. This ruminative ambiance carries over into “Meditation – Remembrance,” which Tim included for listeners to reflect on their own personal moments.

A most interesting inclusion on the album is a bonus track at the end entitled “Beginnings (for orchestra).” According to Tim: “’Beginnings’ is the first song I ever wrote for solo piano, and it was included in my debut album, Biography. I had always envisioned the song as an orchestra-only piece, but I had no way to accomplish this until recently. Completing a first composition is certainly an important moment in my life, so I felt this was the correct time to finally add this to an album.” This version was done in collaboration with fellow pianist/composer Doug Hammer who played a major role in its production. What is most fascinating is that it is not a piano piece with orchestration, but is only orchestra – no piano. It is quite a grand composition filled with dramatic and cinematic overtones and I enjoyed hearing it in contrast to the solo piano pieces on the album.

I think this word “contrast” is relevant to all of Tim’s work on Moments. From one track to the next throughout the recording, a rainbow of emotional colors find expression. From lighthearted and joyous to reflective, wistful, and bittersweet, Tim Neumark’s piano compositions illuminate a full spectrum of feeling portrayed with deep sensitivity and the soul of an artist. While the album is intended to shine a light on the small but significant moments in Tim’s life, listeners are drawn into his world in such a way that evokes precious memories of moments of their own life as well. I’ll conclude with a quote from the back cover of the album: “The most memorable moments in life are the ones we never took the time to plan.”