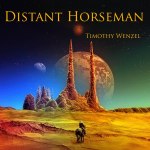 Receiving a new album by Timothy Wenzel is always something I look forward to. Having written previously about his Summon The Wind and River Serene albums, I’ve become a fan of his beautifully written compositions. I’ve learned that Timothy likes to center his music on a specific theme, and this one is no exception. As he described in our interview: “Comprising twelve instrumental selections, the album Distant Horseman is conceptually both a spiritual and a seasonal journey. The songs represent an introspective and allegorical journey, a pondering of what lies beyond the bend in the river. To me the emphasis is on transformation. The uncertainties, the resolution and strengthening of spirit, the journey through the darker parts of our lives and finally the emergence of spirit, cleansed and re-born. But each step along the way is necessary to create such a profound journey.”

Something I’ve always found intriguing is Timothy’s background as both a research scientist in organometallic chemistry and a new age musician/composer, which makes for an interesting balance of left and right brain, or yin and yang from an Eastern perspective. I’ll quote from a previous interview to share his thoughts on this seeming dichotomy: “Scientific exploration is full of creativity and is very much like writing a song. In both cases you start with an idea and then explore the possibilities of where it can lead. Part of the experience is based on education, training and knowledge, but the other part is intuition, experimentation and a touch of magical alchemy that makes things work out.” 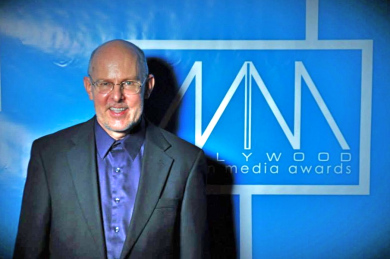 However, in our recent interview he added: “I left my chemist job a few years ago and pursued writing full time. I had to. There was too much I had to say and an unknown amount of time in which to do it. It is the only way I have to communicate my story, my deepest feelings. Also, before my brother passed away, I promised him I would retire early and pursue music. I kept the promise. He taught me so much in life. I am always reminded of the fragility of life, its fleetingness, and how no day should be wasted. I feel my soul is brimming with music so releasing it for others to hear, for me to tell my story, is a passion I must follow.”

Getting back to the theme of this new release Timothy shared: “I wrote all the songs for the album during the period of December 2014 through about August 2015, so naturally they reflect the transition of winter through summer (as described at my website). I also arranged them as sort of a spiritual journey, but it parallels the seasonal journey well. What I didn’t put in my website was that many of the songs were written with the mindset of an older person, in their late 50s, who now sees the cycle of life more clearly and wonders how the cycles are connected.

So lets delve into these songs and cycles of life to go on a journey following the tracks of a Distant Horseman. 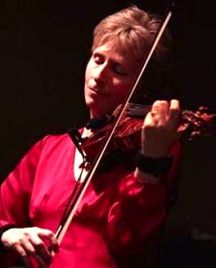 I had mentioned above how part of the theme for this album is “a pondering of what lies beyond the bend in the river,” and this is where we begin with the opening song entitled “A Bend In The River.” Timothy’s music is diverse and can range from earthy to ethereal. This song definitely has both feet planted firmly on the ground with its blend of Appalachian-tinged folk influence and Contemporary Instrumental sounds. Joining Timothy as a special guest on the musical voyage, here and throughout the album, is violinist Josie Quick. I have previously written about Josie’s participation on an album that she played on with her husband Tom Carleno called Perfect Imperfection. I also had the pleasure of meeting Josie and Tom last year at the ZMR Awards in New Orleans and seeing them perform there. Josie is an exceptionally talented musician and an inspiring addition to Timothy’s imaginative album.

Next up is the title song that continues on the earthy end of the spectrum with its lilting Celtic influence. The song has that somewhat bittersweet feel that gives Celtic music such emotional resonance. I particularly liked Timothy’s piano playing, as well as the light orchestration he created around it. Evoking a bit of a similar vibe, although without the Celtic influence, is the next track, “Turn And Walk Away.” 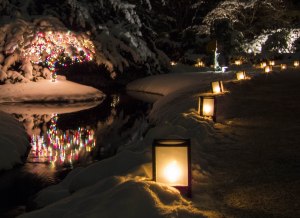 In our interview, Timothy shared a bit about his creative process for the next track: “The song “A Night So Cold” is honestly wondering what happens after death. It represents the underworld. It was written on an extremely cold night so I cast it in terms of darkness and cold. Yet it has a path and it is a journey – a journey guided by flowing water on this freezing night. And by lights guiding one in the darkness. But I did not want to cast the song as one about death but rather as about transformation. The pathway is provided by the violin melody (the flowing water), the light that illuminates are the treble notes of the piano.” It’s a profound and moving piece, and Timothy’s flowing piano arpeggios add to the feeling of moving water.

As Timothy mentioned, thematically, the album starts with winter and moves into spring and summer. With track 7, we come to a place that Timothy calls “the emotional turning point in the journey,” with a song called “Forgiven.” It’s an upbeat and dramatic composition that I interpreted as the thawing of winter and the coming of spring, as well as personal re-birth and a cleansing of the soul. There is a cinematic air to it as it evolves through various moods and movements in what Timothy refers to as, “a deeply-inspired orchestral revelation.”

Flowers begin to bloom and vernal vibrations fill the air with the next song, a light-hearted piece called “Colors 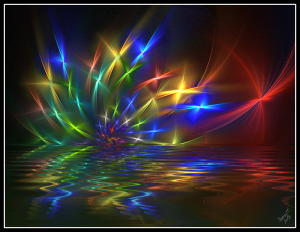 Dancing.” Sweet and soulful is how I would describe “Ecstasy Eyes.” Timothy’s lovely chord progression on piano reminded me a bit of “Pachelbel Canon,” and is embellished by the sound of angelic choirs and Josie’s emotive violin playing. There is something elegant about a song played in 3/4 time, and “Summer’s Dance,” with it’s waltz-like cadence certainly fits this description as it sweeps the listener away in it’s graceful rhythm. The album ends on a magical note with “Luminous Wake, Starlit Sea,” which is also quite cinematic in its ambience. As Timothy describes the significance of this piece in the flow of the album: “You have made it through the trials and darkness of winter, you have re-emerged as a new being, you have fallen in love once again. One blissful voyage awaits…”

Timothy’s music is very visually evocative. And along these lines, I like how on his website he included a beautiful picture for each song to accompany the liner notes. Some of these images grace this feature article as well. I also love the album’s striking cover art done by Edson Moraes, who did the other images as well. Another contributor to this project is a name well known in the new age music genre, recording engineer Corin Nelsen, who did the mastering for the album.

In addition to composing and performing such interesting and original sounding music, Timothy has a wonderful sense as an arranger and a real talent for placing various instruments and elements in a mix that add interest and bring his compositions to life. I enjoy the diversity of his music and not knowing  quite what to expect from one track to the next. And yet, within that diversity, the project as a whole feels like a unified body of work – like a book that is made up of different chapters. I also appreciate how Timothy builds his albums around well-defined themes that bring the listener into the world he has created. Distant Horseman is a visionary musical journey that will appeal to a wide listening audience.