A master alchemist could not have come up with a more perfect blend of elements than the chemistry created in the music of David Lanz and Kristin Amarie – pure magic! Along with a truly all-star cast of musical accompanists, their new album, Silhouettes Of Love is a stunning synergy of new age, smooth jazz, neo-classical influences, and more, which transcends it roots to produce an innovative sound that breaks new ground for these talented artists – a piano icon and a rising star. While Kristin’s previous solo release introduced her impressive vocal abilities, this album with David Lanz takes it to a new level and reveals an artistic interaction that is greater than the sum if its parts.

A lot has happened since I wrote a feature article about Kristin Amarie’s gorgeous album, Notes From A Journey, back in 2013. That recording debuted her collaboration with David Lanz on one song. Now, on Silhouettes Of Love, they have created an entire album together. In addition to their musical connection, David and Kristin’s budding personal relationship has blossomed and they have recently moved from the US to France together. As part of their putting down roots there, they have developed yet another avenue of collaboration. In David’s words: “We have just created a new website: Musicprovence.com where we are letting everyone know about the workshops and concerts we are now offering here in Europe. Our workshops are really just for anyone who loves music, not just musicians. We also gear them around song writing, performance, and creativity, and are even helping to arrange travel and accommodations for people coming from the US!”

Having had the pleasure of meeting this dynamic duo at the ZMR Awards in New Orleans, I was impressed with their charm, graciousness, and obvious affection and respect for each other. I also appreciated David’s sense of humor in his saying: “I always like to point out in my performances that the term New Age is not really a musical term so for fun I coined the term ‘Heavy Mellow,’ a clever play on the phrase Heavy Metal. He went on to say: “If you happen to like this style of music then I guess you would have to be referred to as a ‘Heavy Mellow-head!’”

But in addition to the humor, there is a spiritual focus that informs David’s music, both his solo work and recordings with Kristin. As he shares: “My spiritual path is all about creating music, communicating with sound, and allowing beauty to be expressed in my work. I draw from my source, the same source we all have access to…God if you will…and this source has an inexhaustible supply of inspiration just waiting for each of us to tap into it. This and my life experience is where I go for my inspiration.” Now on this new album, David and Kristin have obviously gone within themselves individually, and also inspired each other to bring out their best collectively on this exquisite testament to the power of love. In their words: “This work is very autobiographical…chronicling the romance, relationship, and spiritual soul connection of the two of us.”

While this is clearly Kristin and David’s album, its not a duo recording. Also featured are a number of accompanists who are major recording artists in their own right, and are among the biggest names in the genres of contemporary instrumental and smooth jazz (and maybe even heavy mellow). They include violin superstar Charlie Bisharat, guitarists Peter White, Ramon Stagnaro, and Alex Salzman, Gregg Karukas on keyboard, upright bassist Keith Lowe, and Brian Kilgore on percussion. David Lanz performs, of course, on piano and keyboards, with Kristin Amarie on vocals. Interestingly, in his earlier days, David was a singer songwriter before moving into instrumental music. But in his words: “Now with the stunning voice and artistry of Kristin Amarie, I have again found my lyrical path and the perfect collaborator to bring that to life.” 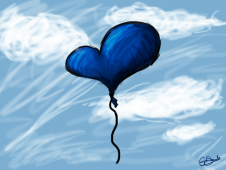 So lets bring this music to life in words and delve into some of the many highlights found within the 13 songs on Silhouettes of Love. The opening track “The Soaring Heart,” is most appropriately named, as it’s ascending melody perfectly captures the feeling of its title. Furthermore, according to David: “I really try and focus on the melody as I develop each piece. The melody is the heart of the song and my goal is to connect with the listener heart to heart, so to speak.” To which I say, mission accomplished. Of particular note in this piece is the beautiful interplay between Kristin’s wordless vocals and Charlie Bisharat’s violin as they weave in and out in unison, harmony, and counterpoint. Incidentally, this piece was composed in Norway last summer, on a piano that belonged to Kristin’s late beloved grandfather.

On the next track, entitled “The Promise,” Kristin Amarie steps into the spotlight as an enchanting storyteller on a haunting ballad that is supported by lush orchestration with a cinematic ambience. Her voice has a clarity and purity that works equally well in quieter wistful passages as well as in more epic climactic moments. There is a profound sense of intimacy in Kristin’s vocals on the romantic “Circles Round The Moon,” that almost makes it feel like she is right there in the room, rather than on a recording. While all the songs on the album are emotionally evocative, the title song is particularly so, with Kristin’s whispery vocals and David’s elegant piano that ventures slightly into a bluesy feel at times. As the song evolves, percussion, bass, and some soft acoustic guitar add a mellow jazzy vibe as well.

And speaking of jazzy and mellow, a track called “Our Illusion” certainly fits this description, reminding me the kind of song you might hear from sultry jazz vocalist Sade. While the subject matter of the album focuses primarily on the magic of love, this song reminds us that there can also be another side to love relationships as well. The intro on a track entitled “Amore Eterno Redux,” features David on piano and synthesizers before flowing into a richly orchestrated movement with a bit of a Spanish flair. I will say, I don’t know how many times in the course of this album I marveled at the intriguing and unique chord changes that David came up with that added so much interest to the songs, taking them in unexpected and delightful directions.

Other aspects of this recording that I’d like to shine a light on are the orchestration and arranging. From delicate passages to grand movements, each song is perfectly put together, enhancing the beauty of the songwriting and taking it to the next level all together. Of course it helps to have world- class musicians to work with, but their talents were so impressively implemented in the arrangements that I must give a lot of credit to David and Kristin for their imaginative work in this phase of the album’s development. This recording presents a new experience to listeners who may be familiar with David from his solo and instrumental work and Kristin, whose previous recording had more of a global flavor. Silhouettes of Love is a romantic masterpiece that is exquisitely crafted and perfectly produced to capture the sound of two hearts beating as one.