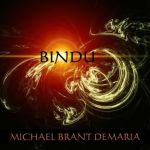 “Bindu” is the fourth CD in Michael Brant DeMaria’s Healing Sound Project and marks a subtle yet intriguing directional shift in his music. While his 30 years as a practitioner and teacher of meditation have always been reflected in his music, his previous releases have had an earthy connection with the natural world, in contrast to this album which explores our inner nature with a more introspective ambience. According to Michael: “Bindu is a Sanskrit word meaning ‘point’ and is often used to signify the moment of creation – both in a universal and deeply personal sense. Bindu reminds us of the miracle of this moment – the miracle of life, the miracle of each breath – and the miracle of each of us.”

This mention of the breath is significant, in that it represents a recurring element in the music of “Bindu.” Frequently throughout the course of the album, a deep reverberant exhale is heard, accentuating the meditative nature of the music. I found this to have a relaxing effect and it reminded me to focus on my breathing helping to create a deeper experience of this healing journey. 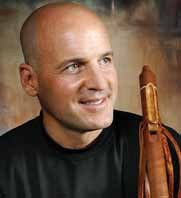 The album begins with “The Way Beyond” which serves as a portal, being the most upbeat track and maintaining a connection to the outer world with its’ earthy percussion and Native flute that Michael is so well known for. His flute playing on this piece features long sustained notes and melodic phrases over a rhythmic background for the first half of the song, until it evolves into a quieter space, where the flute used is used more percussively, blowing shorter notes over a more subdued rhythm along with synthesizers and piano. One thing that stood out to me here, and has always impressed me on the three albums of Michael’s music that I have reviewed, is his impeccable sense of arrangement – the way every instrument and element is so perfectly placed and balanced.

Beginning with the aforementioned deep breath, track 2, “Journey Within,” lives up to its’ name as we enter a more ambient soundscape of spacious electronica, choirs, and echoed bells. From this point on until much later in the album, we are journeying through musical dimensions where sonic textures and atmospheres take precedent over rhythms, reminding me of the kind of music often heard on Hearts Of Space or Echoes radio programs and some of the more ethereal sounds of artists like Steve Roach or Jonn Serrie. While there is perhaps less of Michael’s signature Native flute playing than on his other albums, songs like “Twilight” feature it prominently and tastefully in one of the more minimalist track on the album. What “Bindu” does have in abundance is synthesizers. Not that these are uncommon to Michael’s music, but they are more predominate and are perfectly used here to achieve the goal of creating a deeply meditative mystical listening experience. A lot of the music takes on the feel of a shamanic journey.

Track 8, the title track, is the only other song that uses rhythm and beats. I’m not sure what instruments or samples Michael used to create the groove but it’s very cool and exotic. I recall commenting in a review of his “In The Flow” CD, how impressed I was impressed with his creative and innovative use of percussion and rhythm. With a trance-inducing drone in the background and layers of keyboard textures, the track has both motion and space – a wonderful combination that evokes the dance of creation. The last two compositions are totally expansive and leave the listener floating on an inner ocean of consciousness.

I’ve been a huge fan of Grammy-nominated Michael Brant DeMaria, whose “Gaia album was the first review on the Music and Media Focus website.  I have enjoyed everything I’ve heard by him, however, as someone with a particular affinity for atmospheric synthesizer music, I’d have to say that this is my favorite so far. I also especially liked the cover art, which he designed, that captures the “moment of creation” theme of “Bindu.” In addition to his obvious musical abilities, I’ve felt good about recommending his albums since a portion of the proceeds have gone to supporting charitable causes such as wildlife rescue and recovery. As a psychologist, author, and speaker, Michael has a keen sense of the healing effect of music, which is beautifully reflected in his latest release, as it is in all his music. 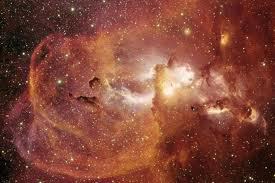