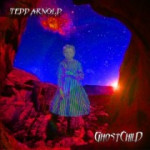 In my three decades as a music journalist, I’ve received many “concept albums,” covering a wide range of subject matter. But one of the most intriguing and unusual ones is a new release from Pittsburgh-based electronic musician, composer, vocalist and lyricist Tedd Arnold, who is known by fans as The Earth Cat. According to Ted: “GhostChild is the story of a young girl, Sarah Diane, that has not fully realized she has passed away. After the initial confusion sets in and she appears to her family as an “Apparition”, her spirit gently moves through the infinite stages of “Form” that sets the stage for her “Returning.” Finally, after traveling many worlds of existence, she meets a “Spirit Guide” that lights the way to a new beginning, “De Novo.”

album. In his words: “My albums tend to be conceptual and I just wait for a spark (a thought, a picture, or a musical piece that starts it off). The concept for GhostChild started with an old tintype that my son found while going through some of his grandfather’s things. I immediately felt a connection with the time, the space, and the spirit that this photograph held and together with the passing of both my wife’s parents last year (4 months apart) this music came forth. It’s basically a meditation on the afterlife – a musical Book of the Dead. I really love making music that evokes feelings of wonder, tells a good story, and makes you think.”

Not surprisingly, Tedd’s musical influences include other conceptually based electronic composers like Mike Oldfield, Vangelis, Phillip Glass, and Wendy Carlos. But Tedd has had a long career in music that has evolved through a number of different phases. Like so many artists that I write about, hearing The Beatles was the first spark that ignited his musical fire. Tedd began as a vocalist and bass player back in the 70’s. However, after playing in a band that had a couple of the early analog synthesizers, he became fascinated with their sonic circuitry and adopted keyboards as his main instrument. At that time, Tedd and fellow members of a band called Fluid became a huge sensation in their area, due in part to their colorful and innovative stage presentation, which led to a national tour with a Laserium Show. In the 80’s he was in another wildly popular Pittsburgh progressive rock band called Radian, in which Tedd was the lead vocalist, flutist, composer, and lyricist. Tedd’s practice of deep meditation and yoga was an influence in his first solo album, Sacred Electronica, as it is in all his music, and his life in general.

Now, decades later, Tedd is still very involved in creating music, both as a member of a progressive rock duo called The Anagram Principle, and as a solo recording artist. This new release, GhostChild, is a solo effort, although utilizing the magic of modern technology he is able to sound like a multi-instrument ensemble. While one might assume from the album’s title and subject matter that the music is dark, but I found it more 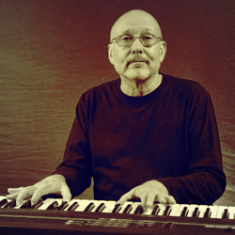 enchanting than spooky. Right from the start with the opening track, “Apparition,” Tedd reveals himself as a master of electronic sounds (see video below). An ambient collage sets the scene for a propulsive track that kicks in after about 30 seconds. Ethereal effects weave in and out of the rhythm, complete with the blips, bleeps, and filter sweeps often found in this genre. Fans of music like Tangerine Dream will feel right at home with this track. I particularly liked how the piece is constantly evolving with changes in the rhythm structure and trippy sound samples dropping in and out of the creatively constructed mix.

Similar territory is explored on track 3, “Form,” although without the rhythm. The next composition entitled “I Know You Hear Me” has a heavier feel that is probably reflective of Tedd’s many years of playing in progressive rock bands. However, things lighten up considerably moving into “Inbetween Skies” with its bouncy percolating arpeggiator creating movement under an airy synthesizer melody. A track called “Spirit Guide” is an interesting blend of electronic ambience and synthesized emulations of more conventional instruments like harp and cello.

One of the most interesting pieces on the album, and the one that holds the most significance for Tedd is a 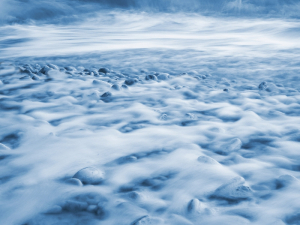 three-part suite entitled “Astral Rain – This Flood – “Resurrection.” It’s also the longest, at over 7 minutes in length. In my interview with Tedd, he shared this about the trilogy: “The most poignant track to me would be ‘Astral Rain – This Flood – Resurrection.’ It was written while spending the last days with my father in law, as I witnessed the final stages he was moving through.” The juxtaposition of elements in the first section, “Astral Rain,” was fascinating. While it had an earthy World music vibe to it with the sound of hand drums, percussion, and chanting, there was also a mystical aspect to it as well. The second movement had more of an orchestral feel while the final part was in the celestial realm All in all it was quite cinematic.

Actually, the word “cinematic” is fairly descriptive of the album as a whole. In some ways it feels like a soundtrack in search of a movie. Like any album, I related to some tracks more than others. But perhaps what impressed me the most about the music overall is Tedd’s mastery in creating and blending diverse sounds. The recording shows off his skills as a composer and arranger in the electronic music genre. Tedd Arnold is a sonic sorcerer with a real feel for using ambient elements to create musical magic. GhostChild is an otherworldly journey in sound that I found, dare I say, “haunting.”