The conceptual foundation of award winning guitarist Lawrence Blatt’s new CD, Emergence is one of the most interesting I’ve heard in a while. The blending of science and music is not often found, but for Lawrence, who studied both microbiology and music as an undergraduate, and went on to earn an MBA and a PhD in science, the combination comes naturally and brings together his two passions in life. Here he explains this union, as well as the reason for the album’s title: “the natural world is full of complex patterns and seemingly unexplainable order. From the migration patterns of birds and butterflies, to the beauty of an individual snowflake, our world is filled with endless expressions of mathematical complexity. Scientists who study these natural phenomenon have begun to understand the concept that diverse patterns can be derived from simple rules, which often lead to unexpected outcomes. This scientific concept has been given the name, ‘emergence.’ I became intrigued by the biological applications of emergence several years ago and I have now utilized the underling tenants of this theory to produce my new musical project entitled, Emergence.

Before getting into the details of his latest release, I’d like to share a bit about Lawrence’s interest in music, which began at an early age. At only eight years old, he began classical violin studies, immersed in the music of Mozart, Bach, and Mendelssohn. In addition, when Lawrence was twelve, he began learning guitar, and over the next decade became a part of the growing folk scene as a singer-songwriter-guitarist while continuing to study classical music. In later years, he had the rare opportunity to study with world-class teachers such as Laurence Juber, who plays with Paul McCartney, and French-Algerian guitar wiz Pierre Bensusan. Lawrence’s music is based on acoustic guitar finger picking, as influenced by Michael Hedges, Leo Kottke, Ottmar Liebert, and Will Ackerman – who Lawrence was fortunate in having produce this new release. Lawrence’s style bridges many genres including acoustic, neo-classical, folk and world music with subtle other flavors including Celtic, Latin, Mid-Eastern, and jazz. Over the course of his career, Lawrence’s music has won numerous awards and nominations, as well as being used in film and TV soundtracks.

As mentioned, Emergence, was produced by the Grammy winning producer and founder of Windham Hill Records, 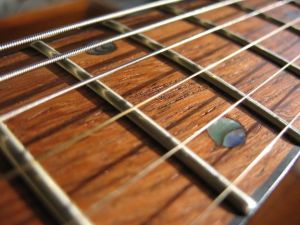 Will Ackerman, and includes a number of Will’s A-list studio musicians. Reflecting back on the theory behind Emergence, Lawrence explains: “For each composition, I wrote the basic guitar part by strictly adhering to musical rules of chord progression and scale theory. For the solo instrumentals that played on the album, no written music was given to individual performers. Instead, I instructed them on the “allowable” movement based on guidance from musical theory and practice. What emerged from this exercise was far greater than I could have ever imagined.” Lawrence believes in “complete takes” when recording (rather than seeking perfection with patched-together solos), and does only minimal studio manipulation of the sound after it leaves his instrument. This is found less and less in today’s world of computer recording and the ability to easily edit tracks together.

For this album, Lawrence composed and arranged all the compositions, as well as played all of the guitar parts and several other instruments including acoustic bass, mandolin and accordion. Some of the songs on the album are ensemble pieces, while others are solo guitar. However, solo pieces can often sound like more than one instrument due to Lawrence’s technique of featuring subtle counter-melodies, rhythmic interplays or even multiple parts played simultaneously on one guitar (lead, rhythm and bass at the same time, for example). He plays in both standard and open tunings using his fingertips rather than fingernails, as is common with many players. Going into detail about his music, Lawrence shares: “My music includes simple tunes, ones that are harmonically and rhythmically complex, some with a modern-sounding edge, and others with a mysterious quality and feeling that could have been written in the 18th century.  As a solo instrumentalist, my guitar is my voice, and I have a lot I want to say.” 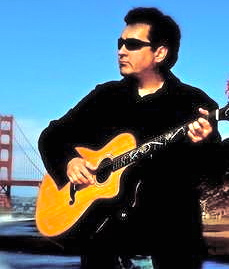 And he certainly does say a lot – both over the course of the album, as well as within a single tune. The above description goes a long way in characterizing the opening track, entitled “A Promise in the Woods.” While it is brief, only a minute and a half in length, it covers a lot of ground melodically, and has one of the most intriguing chord progressions I’ve heard in a while, which Lawrence performs on the baritone guitar in open tuning. I must say that Lawrence plays a fine collection of handcrafted acoustic guitars, which in his hands sing with some sweet sounds. Track two is a stunning duet on the title song which features the violin of Charlie Bisharat accompanying Lawrence’s acoustic guitar. This is quite a different context for Charlie compared to the huge symphonic ensembles he has appeared in while touring with Yanni and John Tesh. By contrast, this piece is as intimate as could be, emanating emotion and heart energy. I found it powerfully moving despite its understated demeanor – a tribute to Lawrence’s songwriting ability.

The classically inspired track called “Gar Du Nord,” is a string lovers delight with accompaniment by Paul Winter Consort member Eugene Friesen on cello, as well as violin and viola by Lila Sklar, with Sam Bevan on double bass. A vernal ambience is conjured by a track called “Walking Among Tulips,” that is accompanied again by Eugene Friesen, as well as frequent Will Ackerman collaborator Jill Haley on English horn, and Richard “Gus” Sebring on French horn. It would be difficult to listen to this song and not feel the lightness and uplifting quality that Lawrence has energized this song with. On “Passing Up Bridges,” Lawrence showcases an even wider range of his musical ability by playing acoustic bass, mandolin, and accordion, in addition to guitar. The accompaniment by Lila Sklar on violin and Jim Rothermel on penny whistle add a distinctive Celtic flavor to this earthy tune. 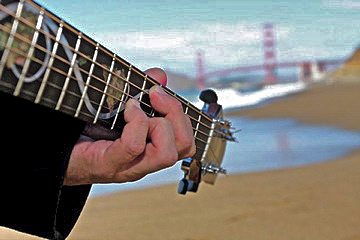 Gate.” This piece offers a good example of how Lawrence’s fretboard technique can make it sound like more than one instrument playing. Another of his distinguishing features as a songwriter is the use of space, which is effectively employed on “Where The Pines Once Stood.” I liked the way pauses were used to allow the music to breathe and also create a sense of expectation before the next phrase. The heartfelt feeling of a fond reunion is evoked on a string-laden composition called “Say Hello Again,” on which the guitar is accompanied by two violins, viola, and cello. As a jazz lover, I especially appreciated hearing a bit of that influence create a warm glow on a solo guitar track entitled “Illuminations.” I also appreciated the exquisite ensemble work on the album’s closing track, “Green Corn.” The interweaving of violin and French horn around Lawrence’s intricate finger picking was spectacular and highlighted the creativity of the song’s arrangement, especially when the three instruments played in unison near the end.

Although Lawrence has been playing acoustic guitar for over 30 years and has multiple CD releases, he has recently been referred to as a “rising star.” His previous albums have been highly regarded, but this latest one, Emergence, takes it to a new level. As Will Ackerman shares: “Lawrence’s guitar compositions have always been abundant in melody, but his new work displays a grace and nuance beyond even his brilliant initial releases. In Emergence he explores a wide range of styles and tempos while maintaining the delicate sense of unity and cohesiveness that the overall program generously provides.” And in Lawrence’s own words: “ I think this album is more mature than previous releases and the album is “about the music,” meaning, that it didn’t need to be only about my guitar. To this end, for several compositions I play an accompanying role, rather than lead role.” This was something that stood out to me as well. Having written about dozens of albums over the past three years that were produced at Will’s Imaginary Road Studio, I’ve noted that the accompanying instruments can sometimes be more understated in the mix, allowing the spotlight to be mainly focused on the primary artist. On Emergence however, I appreciated the more prominent interplay of Lawrence and his musical special guests. But in addition to his stellar guitar skills, I was equally impressed with Lawrence’s abilities as a songwriter and arranger. Emergence is aptly titled as it reflects the bringing to light of one of today’s brightest acoustic guitar recording artists.