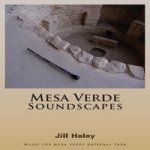 Mesa Verde Soundscapes is the latest release from wind instrument virtuoso Jill Haley, and is the third album in a series that centers on National Parks. I had the honor of writing about her beautiful Zion and Bryce Canyon Soundscapes CD, which was a sequel to her Glacier Soundscapes. The previous review contained background information about Jill, so I’ll refer readers who may be interested to that article, rather than repeating it here. I will, however, quote myself in remarking about a particular aspect of this album: “The packaging of this new CD is exceptional and bears mentioning. Physically, it is longer than a usual CD case and is closer in size to a DVD box. Inside the glossy eco-package is a beautiful full color 15-page booklet with photos of the places in the park that inspired the song titles, along with a descriptive sentence or two about each photo. It is quite lovely and is a wonderful companion to the music within.” I have to say that in today’s world of downloading mp3 files and singles off the internet, I’m thrilled to see an artist producing a body of work like this, built around a concept and accompanied by gorgeous photos and comments. This also makes it a wonderful item for gift giving.

After being admitted to the artist-in-residence program at Mesa Verde National Park in the Four Corners area of Colorado, Jill got to spend about two weeks actually living in the park and learning about the ancestral Puebloans who lived in the cliffs from A.D. 600 to 1300. According to Jill: “My goal for the two weeks was to gather enough music for another CD. I was given the opportunity to sign up for a back-country permit, which meant that I could go into the sites after hours and get in touch with the spirit of the place, and I could record myself playing.” At the end of her residency, Jill, accompanied by her husband, guitarist David Cullen, performed the new music she had written at a concert held in the park. She also shot a good deal of video while there to use is later projects, and is looking forward to applying for an artist-in-residence program at another national park. 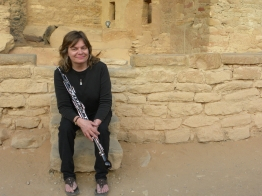 Hopefully, she will find time to do this given her busy recording and performing schedule. As I had written in a previous article, Jill appears as a studio musician playing oboe and English horn on many albums produced by other artists. In particular, she is a frequent collaborator on projects recorded at Will Ackerman’s Imaginary Road Studio in Vermont. I don’t know how many albums produced there that I have written about which featured Jill as an accompanist, but it’s a lot. So its no surprise that Jill recorded her tracks there, which she co-produced with studio wiz Tom Eaton, who mixed and mastered the album. In addition to the wind instruments she is so well known for, Jill played piano as well. Also appearing on the recording are David Cullen on guitar and bass, Dana Cullen on horn, cellist Graham Cullen, and Risa Cullen on viola, making this a true family affair.

Following the cycle of the day, the album begins with the appropriately titled “Chapin Daybreak,” and is accompanied by a lovely photo in the booklet of the first rays of the morning sun illuminating the park’s rocky cliffs. It’s a simple, yet elegant piece that features Jill on oboe and piano. As I mentioned in my previous review, Jill is best known for her evocative work on wind and reed instruments, but she is quite an accomplished pianist as well. I found some of Jill’s comments about the music and her experience to be thought provoking – in particular, about a song called “Thread of Continuity.” In touring the park and learning about it’s earlier inhabitants, she mused about what life must have been like then, and how certain aspects relate to today. In her words: “The 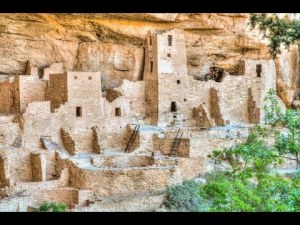 daily routine of the ancestral Pueblo people was similar in many ways to the lives of today’s visitors. Meals were cooked, ceremonies were held, and games were played.” She imagined the women chatting with each other as they ground the corn, and the men were hunting or weaving. She was struck how “all people have the same daily concerns about making food, caring for children, fixing things that break, etc. Even viewing the beautiful landscapes brings a realization to the present day visitor that many of the animals, plants, and geological formations we see today were also viewed by the Ancestral Pueblo people. A “thread of continuity” theme continued to present itself to me while I was living in the park and creating music.” In contrast to the songs that preceded it, which had more of a haunting quality, this one is sunny and upbeat, featuring guitar, bass, and English horn. It was one of my favorites. 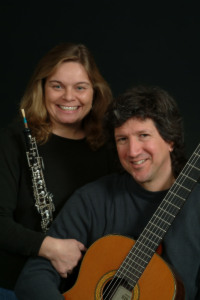 I found it interesting how on a piece called “Sandstone Angels,” Jill’s sustained notes on the English horn, evoked slightly, the sound and spirit of the Native flute which must have echoed through those ancient canyons so long ago. Another lively tune is an acoustic guitar-driven composition entitled “Towers and Kivas.” David Cullen is an extremely talented instrumentalist, and not surprisingly, he and Jill have exceptional chemistry together. On “Sipapu Emergence,” the sonorous sounds of viola and cello add rich orchestration to Jill’s English horn and oboe. Incidentally, a sipapu, as she explains, “ is a small hole close to the firepit in the kiva. This represents the opening through which man emerged onto the face of the earth.” Related to this is the track called “Living Walls,” which refers to the fact that descendents of the ancestral Pueblo people believe their spirits still live in the walls of the dwellings at Mesa Verde.

The album, which began with “Chapin Daybreak,” ends accordingly with a piano solo called “Mesa Nightfall,” a part of the day, which Jill describes as “a magical time when so many colors come together during the sunset and dissolve into a beautiful night time sky.” One of the things I enjoyed most about this album is the sense of place it evokes. Along with the gorgeous music, Jill’s photos and her comments about them really add to the experience, making it much more tangible than just hearing the songs. Along with her, I found myself wondering about the people who once lived there, and what their lives were like. I have to commend Jill Haley for her efforts to bring the treasures of our National Parks to awareness. Like the previous albums in this series, Mesa Verde Soundscapes is a rich experience for the listener just as the park is for those who are fortunate enough to visit it. I highly recommend getting the full CD package with the booklet, rather than downloading mp3 files. While Jill Haley has made quite a name for herself in the role of accompanist, I’m pleased to see her step into the spotlight once again and bring her own artistic vision to life.