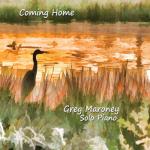 There is something about the elegant simplicity and spaciousness in much of pianist Greg Maroney’s music that is perhaps a reflection of the earthy rural lifestyle he leads in south central Pennsylvania where he and his wife tend their gardens to raise much of their own food, build their own barn with only hand tools, and seek to live in harmony with nature. Much of Greg’s inspiration comes from the beauty of this region with it’s rolling farmland, with endless fields of corn and wheat that ripple in the winds, and summer thunderstorms. Also, according to Greg’s bio: “His songs are derived from his life experiences as well as the emotional and spiritual journey we all take as human beings.”

I also sensed a connection between the aforementioned spaciousness in his music and a quote I read on Greg’s website by Vladimir Horowitz: “It’s the silence that matters, not the applause. Anyone can have applause. But the silence, before and during the playing – that is everything.” Greg has developed his own style that I’m sure, draws from all of the above, but his musical roots are deep and have been nourished by his studying classical and jazz piano since age 5. And reflecting a totally different facet of his musical spectrum, he also studied classical Indian music and music of the Middle East, and gave performances on the sitar and saz in the early 1970’s.

However, at this point in his artistic career, Greg considers himself to be a Modern Romantic 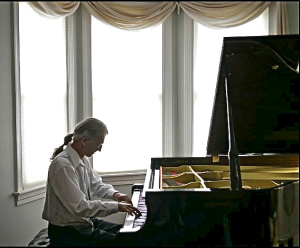 solo piano artist. Another point of reference that came to mind while listening to his gorgeous piano melodies was the pastoral Windham Hill sound as exemplified by many well-loved artists over the years such as George Winson, Liz Story, David Lanz, and others. Greg has been prolific in his recording career, having composed and released 12 CDs of original piano music, in addition to three of his tracks being featured on compilation disks.

The album begins, most appropriately, with a composition entitled “Gentle Dawn.” According to Greg: “This song represents the first pink light of the morning, the time between night and day. It is a gentle time filled with potential and promise.” It’s also a perfect way to begin the album, and one that awakens the promise of the music to follow. I appreciated Greg’s sense of dynamics on a piece entitled “The Heart Is Enough,” which opens with a slow-rolling bluesy gospel feel and builds to a couple high points and eventually settling back down into the space it started from. Greg notes that “this was written to one of my first spiritual teachers, who inspired me to seek a life that is full of love and compassion.” And at the crescendo, it does feel like a heart so full of love that it is about to burst. 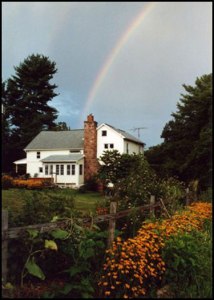 In one of life’s little synchronicities, as I was listening to this album, a track called “After The Storm” came up just as the driving rain and wind of the last few hours came to a stop and the sky began to clear. However, Greg uses this title metaphorically to address the challenges and inner turmoil we all experience. Although there are no lyrics, Greg’s instrumental music has a powerful storytelling quality to it that is descriptive purely in its moods, melodies, and ability to convey emotional content musically. Along these lines, Greg refers to a track entitled “Returning” as a “tone poem,” which is a characterization that perfectly fits a good deal of his music. I particularly liked a lively upbeat tune called “Spinning,” which had an interesting genesis. According to Greg: “This song actually came out of an exercise that I was working on.  I became a little bored with the dryness of the exercise, so I branched out and made a song out of it. It just shows that inspiration can come out of anything!”

One of the most moving songs on the album, for me, was “When Its Gone.” Greg describes this as: “the feeling of loneliness when something you value is not there any more.  I seem to write about a lot of different emotions, not just happy ones.  I think we all have a longing inside us that yearns for unity, but the human condition does not always allow it.  This song expresses the yearning.” There is something about its wistful air that reaches in and touches a deep soul place that we have all been to, while I also felt a ray of hopefulness in Greg’s haunting melody.

Another favorite of mine was “A Different Sky.” With its more ornate phrasing and technically 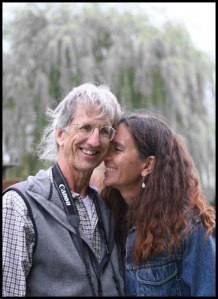 difficult passages, this one reveals a slightly different facet of Greg’s playing and composing skills. On “Linda’s Smile,” I also appreciated not only the lovely playing, but also the sweet sentiment behind this expression of love that Greg wrote to his wife. This, like many of his songs starts out simply and builds in complexity and emotion as it evolves. And speaking, once again, of different facets, a lighter side is evident in a fun, nursery rhyme-like romp called “The Cat and The Cricket,” which Greg says was inspired by his imagining of a cat playing with a cricket. However, he assures us that: “no animals were harmed.” The album draws to a peaceful conclusion with Greg’s arrangement of the classic song “Shenandoah.” This piece works well as a closing number that evoked, for me, a feeling of sunset and a winding down of the day, which bookends perfectly with the dawn energy of the opening track.

Coming Home by Greg Maroney is perfectly titled in that evokes a warm cozy feeling like relaxing by fireplace with a steaming cup of cocoa after a long winter day. While it is evident throughout the album that Greg has well-developed technical skills as a pianist and composer, he sometimes finds his expression in simple uncluttered phrasing and motifs. Yet when a song evolves and blossoms into something more complex and challenging musically, it provides a contrast and a reminder that this is an artist with extensive abilities and range. I must emphasize again Greg’s sensitivity to dynamics and feel, which, to me are some of his strongest attributes. His knowing of when to let the music breathe and when to build it up animates his artistry and provides an evocative listening experience. I’ll leave the final words to Greg himself in his wish for the listener: “I hope you find music in your world and your world in my music.”