If there was ever a soundtrack in search of a film, this magical mystery tour of an album by vocalist Rebekah Eden is certainly one. Although, in fact, it almost did become part of an iconic film soundtrack. As Rebekah shared in our interview: “Several years ago I had the opportunity to submit some of my songs to the Hobbit filmmakers for consideration (while Warner Bros. gave it two thumbs up, none of the songs in fact made it into the film). Within the year I also created (and submitted to the Hobbit filmmakers) a fourth song inspired by The Hobbit.” Although these songs were unfortunately not in the film, they are indeed part of this evocative album. Listening with eyes closed, it is not hard to create your own movie within the theater of your imagination.

While the music on this album is absolutely breathtaking, there is a dimension to it that goes beyond the instrumentation, lyrics and vocals, orchestration, etc. A profound sense of spirituality is woven through every aspect of the compositions. Rebekah shared quite effusively about this in our interview, and while I wish there was room here to reprint it all, these excerpts will provide a sense of her intention: “Overall, I would say that my music writing is deeply influenced by my desire to wake up to good, learn to truly love myself and others, and become an intrepid force for that good. Philosophically, I often (every day, really) ponder the apparent mass spiritual amnesia on planet earth. We don’t remember where we were before we got here/were born, we don’t know what we’re doing here, and we don’t know where we are going. But a number of experiences have shown me glimpses of the fact that Love and light are – really! – at the heart of our being, and all else is illusion.”

She goes on to say: “I’ve always had a yearning for the sacred in music: the New Age/World 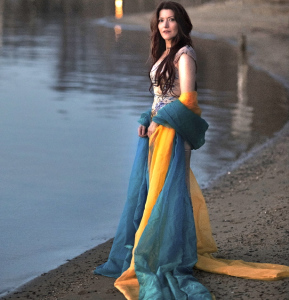 Music genre is so inclusive of different cultures and faiths, and allows for the space, the sacredness in music to appear. It is not driven by formulas to create chart-topping hits, but is dedicated to the expression of the heart and soul, no matter what musical form it takes. I feel free to be myself within this genre. In truth, my musical vision is to create such moving music that whatever listeners hold in their hearts that prevents them from loving and accepting themselves will dissolve.”

The inclusiveness that Rebekah spoke of above has been part of her musical life from an early age. Growing up in a family with a mother who was a pianist and father who played the violin and viola, Rebekah was exposed to live chamber music in her home which included lots of Mozart, Beethoven, Hadyn and Bach. She began playing piano as a young child, studying classical music, as well as learning to play songs on acoustic guitar by The Beatles and James Taylor. Her tastes have diversified over the years to include classical, show tunes, rock, and eventually new age vocalists Loreena McKennitt, Sarah McLachlan, and Enya, as well as many others, including her all-time favorite soprano Leontyne Price. Many of these influences have helped to shape Rebekah’s musical DNA leading to the distinctive sound she has crafted in her own original music.

However, not all of Rebekah’s influences are musical, and the first song on the album was inspired by her late friend and spiritual mentor, Dr. Arthur Earl Jones who studied under Theodor Reik, a student of Freud, and was a psychotherapist in NYC for many years. The composition is called “A Message From the Stars,” and is based on one of Dr. Jones’ poems which reads:

“When darkness claims a victory in its fight
To conquer All that’s Free and True and Right,
Then be the Sun whose Love transmutes the night,
For we are in this world to give it Light” 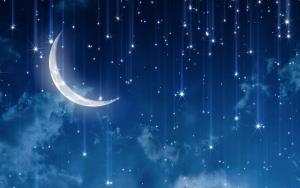 According to Rebekah: “I feel that this poem is a call to all of us to remember ourselves (as in remember that Spirit constitutes our true identity, not human form or experience) – it also illuminates the path forward. It is an exhortation to stake one’s claim to one’s spirit and purpose in the world…which is why I set it twice and begin and end the album with it. The opening version of A Message From the Stars – set for string orchestra, flute, Sitar, harp and voice is a reminder about what we are up against as much as the fact that love – our very being and purpose – naturally transmutes and shines away the darkness.” The only word that truly describes this music is “cinematic,” and perhaps preceded by the word “intensely” and followed by an exclamation point. The lush orchestration that comprises the intro strikes an interesting balance between a mystical mysterious vibe with the sitar sections and the uplifting string sections. When Rebekah’s crystalline vocal’s come in at nearly the half way point it is quite dramatic and moving.

Track 2 segues into Track 3 without a break, but actually appear as two separate songs on the album (and can be purchased separately on iTunes). The first part, “Iachtach” or Lament, is a Uilleann Pipes solo written and played by Patrick Hutchinson (who has played on Loreena McKennitt’s albums). This is a prelude to a piece which Rebekah describes in this way: “Track 3, ‘Prince Caspian’s Prayer,’ is probably the song I’m proudest of. This was inspired by CS Lewis’s Chronicles of Narnia, ‘Prince Caspian’ (Book II in the series).” At almost 10 minutes in length, this epic tale illustrates the fact that while Rebekah is a stellar vocalist and musician, she is just as much a storyteller in song. 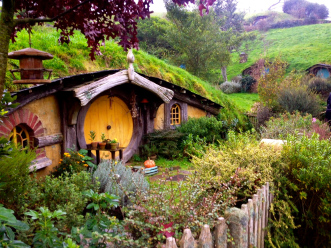 A Tolkien-inspired track called “The Wind” was one of the songs Rebekah created and submitted to the Hobbit filmmakers and is scored for voice, string orchestra, harp and Irish flute. As she describes: “My lyrics reflect the mystery of nature, and particularly the inscrutability of the wind’s wanderings. Shamans and maybe Hobbits too look for messages in nature, good omens, bad omens, signs of a way forward, or a way through; the wind in this song reflects an overall sense of mystery, and the uneasiness and fear of the traveling dwarves trying to make their way through some pretty unsavory territory.”

A most interesting and unexpected song that finds its way onto the album is a cover of a classic Led Zeppelin tune called “Ramble On.” Keep in mind, however, that while that group is often associated with their hard rock and proto heavy metal music, they were equally adept at acoustic guitar-driven English folk music with a decidedly Tolkien leaning, as on this song. I must admit, being a big fan of Led Zeppelin, I was anxious to hear Rebekah’s rendition. While the original is a blend of acoustic and heavier rock, her version trades the electric guitar wall of sound and powerhouse drumming for beautifully arranged neo-classical string sections. Rebekah has truly put her own stamp on this iconic song, which fits perfectly into the context of this album. 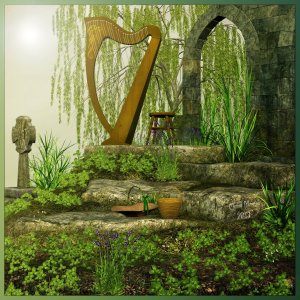 However, before I disavow any traditional rock influence in Rebekah’s music, the next song, “There and Back Again,” actually does draw on that genre. This song, according to Rebekah: “ made use of a traditional band (electric, acoustic and pedal steel guitars, piano, bass and drums), as well as a multi-tracked string quartet, and tin whistle. The feeling is distinctly Celtic but with much more modern elements included.” In addition to musical influences, Rebekah is also inspired by poetry, and on “The Two Trees,” she has put music to the words of a poem by WB Yeats. Similarly, on “Wild Nights,” she has set the words of Emily Dickinson to music. Both are quite lovely, while “Wild Nights” lives up to its title towards the end as it reflects just a bit of that other aspect of Led Zeppelin mentioned above.

The album comes full circle with another version of the opening track, “A Message From the Stars.” This is an all-vocal rendition which Rebekah describes in this way: “The closing track of A Message From the Stars was set for and recorded by individuals in a virtual choir. In the end we multi- tracked about 25 people on the piece and recordings were emailed to me, then edited and mixed by my sound engineers (Dan Edminster, Blake Althen and Grammy-award winner Charlie Pilzer). It’s a song of awakening and purpose. The virtual choir – i.e., the fact that we are singing it all together – was something that deeply touched me and made Dr. Jones’ message all the more beautiful and uplifting. We are better together and not meant to be alone, struggling away.”

This is an album that is so incredibly rich musically and lyrically, I wish there was more room 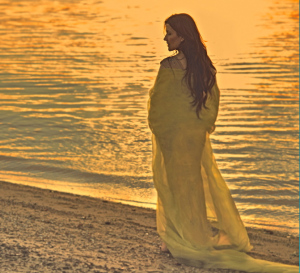 within the scope of this feature article to go into depth on the details and words of each song. Rowing In Edenis an absolute masterpiece; an exquisitely created and produced collection of songs that take the listener on some of the most imaginative journeys I’ve experienced in a while. Rebekah’s voice is stunningly beautiful and exquisitely expressive, while her compositions are as visually evocative to the mind’s eye as they are inspiring to the spirit. I cannot emphasize enough, the cinematic quality of this music. While her sound and style is her own, I’m sure that fans of Loreena McKennitt and Enya would be equally enchanted with the music of Rebekah Eden.