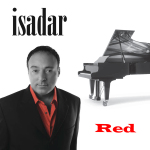 Given the meteoric success Isadar’s previous album Reconstructed has had – reaching the number 2 spot on the ZMR Charts (June 2012) and the extensive radio airplay, not only in the US, but literally all over Europe as well as Canada, Australia, Russia, and South Korea, I’m sure there are many listeners who will be eager to hear his latest release, Red. In between these two albums, he released a holiday CD entitled O Christmas as well. But if you’ve heard his previous music and think you are familiar with his style, as the saying goes, “you ain’t heard nothing yet.” While still a solo piano recording, Red opens the door to a whole new dimension of Isadar’s keyboard talent and vision.

Having reviewed both of his recent releases here on Music and Media Focus, readers who are interested in Isadar’s background and bio can find that information on my review of his Reconstructedalbum. Perhaps the most distinguishing feature of Red is the infusion of high-energy jazz and neo-classical elements into Isadar’s generally impressionistic new age style. The more mellow ambience of Reconstructed may have been influenced by the fact that the album was recorded and produced by the Grammy-winning founder of Windham Hill Records, Will Ackerman at his famous Imaginary Roads Studio in Vermont. I wouldn’t be surprised if the vibrations of well-known Windham Hill artists like George Winston, Liz Story, and others are still present in the world class Steinway piano that so many have played on at that studio. On Red, however, Isadar steps out of any lingering shadows and charts a bold new direction for his music – one that may have radio programmers wondering quite how to classify it. But I have to give Isadar credit for following his muse and producing the music he wanted, regardless of what category it fits, or doesn’t fit into.

Interestingly, Red is being released around Valentines Day, and opens with a track entitled “Broken Valentine.” This piece is a perfect example of the creative freedom Isadar has chosen to express on this album. As I listened to the lovely emotionally moving melody, I assumed that the entire composition would unfold along similar lines. So I had a bit of a surprise after about a minute when the piece suddenly took off in a decidedly jazzier direction, with the feel of a hang glider pilot leaping off a cliff and taking to the wind. At this point, I experienced a side of Isadar’s playing that I hadn’t heard before quite like this. It was powerful, passionate, and spirited, bringing to mind jazz greats Keith Jarrett and Chick Corea. Yet even in the midst of this intense forward motion, Isadar makes good use of dynamics and modulates the tempo and movement using an occasional pregnant pause as a prelude to shifting musical gears. This was quite an impressive introduction to the new direction of this album and certainly piqued my interest for what was to follow.

The title song does not have quite the same dramatic ratio of yin to yang as the first track, but does shift freely between a flowing melody and a bouncy rhythmic motif within the composition. “The Man Who Broke My Heart” is a lush evocative piece that highlights Isadar’s ability to dig deep into emotional terrain with impeccable style and grace. Likewise on “The Stairwell,” which is a beautifully sensitive piece that unlike some of the earlier songs has a higher degree of thematic consistency throughout, although there are some crescendos that are quite powerful within the context of the song’s subtlety. I couldn’t help but wonder, however, about the enigmatic relationship between the title and the music within. 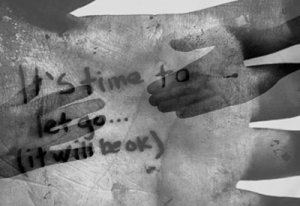 “Letting Go” marks a return to Isadar’s pattern of contrasting diverse elements within the framework of a single composition. Starting out in a more wistful and melancholy air, it evolves, within its nine-minute length, into a markedly different space that actually had my head nodding and my toe tapping along with it. These vacillations are reprised throughout the piece and make for a delightful play of shadow and light, like the sun coming in and out from behind the clouds. Similarly, the next song entitled “En Face Du Miroir (Facing The Mirror) continues with the musical polarities. On paper, its’ hard to imagine how these disparate styles could integrate so well, but Isadar does it so seamlessly that all I could do was to marvel at his sense of artistry and innovation. Tying in with the CD’s title, the album concludes with “Blood… Thicker Than Water,” and provides a final glimpse at Isadar’s incredible finesse as a pianist – very impressive. Red is a masterful recording that encompasses stunning technique, imaginative composition, and the willingness to take a risk in following the pied piper of one’s muse, wherever it may lead. I have every reason to believe that listeners will happily get in line behind him on this exciting musical adventure. 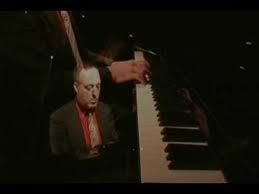