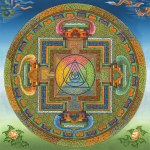 Its been a year since I wrote about the self-titled debut album of White Sun, a Los Angeles-based band known for its pioneering musical interpretations of yogic mantras. Now they are following up with the release of their next album appropriately called White Sun II. For those who may not be familiar, the dictionary defines a mantra as: “a word or sound repeated to aid concentration in meditation, a Vedic hymn, a statement or slogan repeated frequently.” While this type of spiritual chanting dates back to ancient times, it has been enjoying a modern resurgence as people search for deeper attunement and inner connection in life. One difference in White Sun’s interpretation of this sacred music is that rather than being chanted repetitively as it traditionally is, here it is presented in more contemporary song form with melodies, verses, choruses, and arrangements. 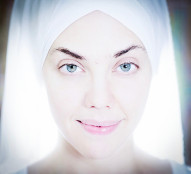 To elaborate on this, lead vocalist and harmonium player Gurujas (pronounced goo-roo-jahs) shared these thoughts in our interview: “We are yogis, and these are our songs. We feel these mantras, ancient sounds, want to be set in new musical settings. The mantras want to dance on the world stage. The mantras want to sing their sounds throughout this global computer landscape we have created. The mantras want to participate in the evolution of humanity. These are the songs that bring balance and harmony to the person who is struggling with the onslaught of computerized information. These are the songs that can heal, can protect, exalt and expand you. These mantras changed me, gave me incredible experiences of wonder and joy.  I feel very privileged to help sing them into creation.” 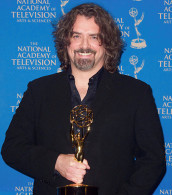 In addition to Gurujas, the two other core members of White Sun are two-time Emmy Award winner Adam Berry, a multi-instrumentalist and composer who has written and recorded music that has been heard by millions in major television productions from Disney, Dreamworks, Nickelodeon, Comedy Central and HBO. On this album, in addition to producing and mixing it, Adam plays guitar, keyboard, and bass. The third core member of the group is Harijiwan (pronounced huddy-gee-vin) who plays the gong and serves as the spiritual leader. All three are dedicated to the practice of Kundalini Yoga, as taught by Yogi Bhajan. In addition, the album is embellished by the musical genius of special guests like Mamadou Diabate, Gabe Witcher, Abhiman Kaushal, and the Waters Family, who will be discussed as we delve into the music on White Sun II. 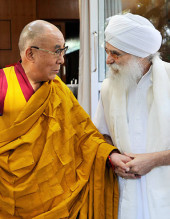 Harijiwan with The Dali Lama

The songs on this album are in a 600-year-old written language called Gurmukhi, which derives from the even-older Sanskrit with Persian influences. The first of these is called “Gobinday Mukunday.“ After a brief intro, it evolves into a dramatically orchestrated piece with a cinematic air. A special guest on this track, as well as others is renowned tabla drummer Abhiman Kaushal, a music professor at UCLA who has recorded with Ravi Shankar and Philip Glass, as well as playing on the first White Sun album. His playing is jaw dropping and adds immeasurably to the music. Also lending their talents here and elsewhere on the recording are Gabe Witcher on fiddle and Mamadou Diabate who plays the kora, a 21-stringed African instrument. Gurujas’ beautiful crystal clear voice sounds closer and more real than it did on the last album. Another difference between this album and the last is that previously the group decided not to feature instrumental solos, and there were no musical interludes. On this album they decided to do exactly the opposite.

In contrast to the dramatic high energy of the first track, the next one, “Ajai Alai” has a much softer and more intimate feel. There is a haunting mysterious quality to Gurujas’ vocals that is wonderfully soothing. This piece flows nicely into the next one, Chattra Chakkra Varti,” which is also on the meditative side as it opens with the heavenly harp-like sound of the kora supported by strings and guitar that provide a airy ambiance for Gurujas to sing over – quite lovely.

There is an interesting story behind track 5, “Suniai,” which was shared in our interview: “Gurujas originally wrote this as a pop ballad about love, intending for the song to be recorded in English. The melody was later adapted for Suniai, a mantra that brings knowledge through deep listening. White Sun producer Adam Berry always felt that the track maintained the vibe of a love-song, seemingly written about a girl named Suniai. Suniai, in a sense, is a sound that connects to the goddess of music, the celestial guardian of the sound current. So when we hear the word Suniai our brain forms a neuron pattern that allows us to hear the unheard, hear the unknowable, and then from that new higher frequency brain pattern we can start to sing new things into creation. Suniai unlocks the cosmic creative power of the sound that creates creation.”

An unexpected addition to the album is the inclusion of a song without any vocal tracks. Entitled “Akal Instrumental,” it precedes a track called Akal, which is a version of the song with vocals. However, the instrumental rendition includes keyboard, kora, and guitar parts which are not heard on the vocal version. It is quite beautiful and has an archetypal new age meditative music ambience, as does the vocal version which features only subtle keyboard orchestration and layers of ethereal voices.

Quite a different and unique direction is explored on the next to the last track called “Humme Hum.” According to Gurujas: “When I wrote the melody for this song I wanted to tap into the blues sound current of the Mississippi Delta, and the sounds that came from Muscle Shoals, Alabama, which is on the Tennessee River, what the Native Americans called the ‘Singing River.’ I wanted to root our yoga song in deep American musical history. So we asked Bobbi Page to round up some gospel singers. And she came in with nine singers, including Julia Waters, Maxine Waters, and Oren Waters. I had seen them in the movie ’20 Feet from Stardom.’ Adam said to me, ‘Well, we have some of the most famous back-up singers in the history of recorded music in the studio today.’ Singing with them was a real thrill for me.”  I loved the laid back bluesy vibe that the song started out with. But as it evolved and the gospel singers started weaving into the mix, things got soulful in a hurry. By the end there was much testifying, raising the roof, and making a joyful noise that gave me chills to hear. 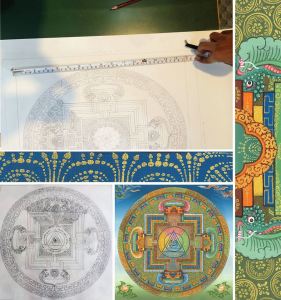 Another aspect of the album that is strikingly different than the previous release is the cover art. While the cover of first White Sun was more basic and understated in white and yellow, the new one is an absolutely stunning Tibetan-style thangka, or mandala in the colors of the rainbow. According to Adam Berry: “Gurujas, worked with Nepalese painter Ganesh Lama for weeks to create the White Sun II CD cover design, meeting first in Nepal and then exchanging emails and drawings until they came up with a precise pictorial mirror of the White Sun sound. It took a total of 8 months to complete, and some of the finer details were created using a single hair of a paintbrush.” Gurujas added: “The artist used real 24 carat gold paint for the finer touches – another tradition in thangka-painting.” The inside panels of the CD also contain close up details of the painting. All in all, this is one gorgeous bit of packaging. White Sun has really stepped up their game in this regard.

White Sun continues to produce exquisite spiritually focused music in a format that reaches across borders to inspire listeners universally. I appreciate their openness to explore new musical territory and incorporate diverse cultural influences into their ever-evolving sound. This is beautifully reflected in a quote that has guided Gurujas in her creative journey: “You are obligated to move the music further down the road from where it found you.” White Sun II is a testament to that belief and a shining example of a focused collective intention to, in some small way, create a better and more peaceful world.