Flowers in a musical garden can grow from many kinds of seeds. Some are seeds of love, joy, and bright sunny days, while some are seeds of shadow, sorrow, and searching. The music on James Sera’s album Reality of the Fantasy is like a mixed bouquet grown from a diversity of seeds. Written at a challenging time in his life, the solo acoustic guitar music James has created, is in his words, “a quest to find harmony in a world of dissonance and discord, creating a calming, soothing yet hypnotic quality to the music for the listener to experience. Although this album is intended to soothe, I think there are some dark moments on the album that I would consider more ambient in nature.” While I don’t know if I would describe any of the musical elements as “dark,” there is a blending of both yin and yang over the course of the recording.

Since receiving his first guitar at the age of 7, James’ passion for the instrument grew. He took lessons in a number of styles and eventually went on to graduate from the prestigious Guitar Program at the Musicians Institute in Hollywood, California. His influences and inspirations are numerous and include progressive rock bands such as Pink Floyd and Yes, as well as more acoustic music like John Fahey, Leo Kottke, Robbie Basho, George Winston, Michael Hedges, and more. A pivotal moment in James’ musical evolution toward solo acoustic guitar was when he saw Kaki King perform at a club in his native New York City. As he describes it: “I had never seen someone with just an acoustic guitar and no backing band captivate an audience like that before. I had always been into instrumental music, but a solo acoustic guitar instrumentalist really appealed to me, not only as a guitar player or as a songwriter/composer, but more important, spiritually. I felt instantly like an inner calling to pursue this form of music. To be able to tell a story or convey a feeling or an emotion with just one guitar, wow!” 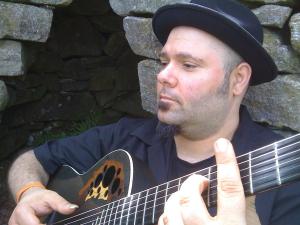 Having been deeply influenced by many of the well-known acoustic solo instrumentalists who have graced the Windham Hill label, it was like a dream come true for James when Windham Hill founder Will Ackerman heard potential in the tracks James sent him and he was invited to the producer’s famed Imaginary Roads Studio to record. As he tells it: “When it came time to record the album there was no other place I could even think of besides Imaginary Road studios – the history and energy of music that has been recorded there! I feel very fortunate to have recorded this album there.” James has deep appreciation for every aspect of the experience including working with Grammy winning engineer Corin Nelsen who made James feel comfortable in the studio and brought out the best in his playing, encouraging him: “Don’t hold back, play as you feel.”

While there are many musical stories told on the album, James would like the listener to view it as one unified body of work with its own conceptual flow. The opening track, entitled, “Wish,” serves as an introduction and the albums’ “once upon a time…” With gentle fingerstyle guitar picking, James sets a light dreamy tone. I liked that the piece was not locked into a common verse, chorus, bridge arrangement and had an organic flow with sometimes unexpected turns. On the next song, “The Ascension,” different colors from James emotional palate are portrayed in more muted tones, evoking a pensive, searching feel in comparison to the go-with-the- flow vibe of the preceding piece. However, the clouds part and the sun comes out again on track 3, “Day of Celebration,” which for James signifies the feeling of “the joy of a birth or a first dance at wedding – a moment of love.” One of my favorite tracks was a song called “Awakenings,” which employed some exotic chord voicings that created an evocative ambience as it wandered through a forest of feelings.

As the album tells its tales, according to James: “everything leads up to the title track, ‘Reality of the Fantasy.’ Facing the storm, looking to resolve the situation now, the battle,” This song encapsulates the climax of the album. James shares his perceptions on the album’s title: “There is a reality to every fantasy in life. Whether it’s going on a date, a new job, going

somewhere new… and that reality can exceed our expectations or it can be a lot more painful or difficult than we ever imagined. The reality of the fantasy in essence is the truth. Not what we tell ourselves to be the truth. It’s the moment we awaken.” The melodies in this piece are not always what we expect either, and sometimes digress in surprising ways. James has a characteristic arpeggiated fingerpicking style that is woven throughout his music, yet with variations in tempo, chord changes, motifs, and emotions.

And speaking of emotions, in sharing about what the album’s cover art means to him, James reveals: “For me there is something that is lonely about solo instrumental music, and there is also something very liberating to it as well. I love that (on the cover) it is me playing by myself on this little deserted island in stormy weather with the raging sea in the background. I think it gives the listener a glimpse of what the music or story of the album is all about.” As mentioned, the album was created a tumultuous time in James’ life, and the music expresses the ebb and flow of his journey. With songwriting for his next album already underway, it will be interesting to see what the future holds musically for talented guitarist James Sera. 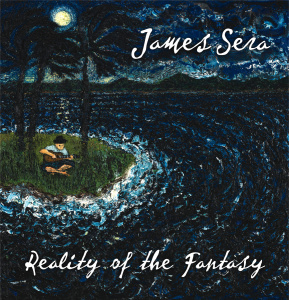