Before even hearing the music on Moon and Shadows by Barbara Hills, its hard not to be impressed by the stunning package it is presented in. This double CD is produced in a small ‘book’ format, which includes fifteen photos of places that have inspired Barbara Hills for many years. Although the fact that there is such a visual aspect to the album is not surprising, considering that’s where Barbara’s roots are. In her words: “I started out in the visual arts and there I’m particularly fond of mixing media and creating collages. With music I seem to be doing a very similar thing!” She goes on to say: “My own musical vision is definitely tied up with ‘painting in sound’. To get the sound I’m after, I use classical and folk instruments together with a sound module, controller keyboard and software. Into this mix I throw sounds I have invented, recorded and sometimes manipulated. There are a few exceptions but, generally speaking, it’s a very layered mixture.”

While the visual arts have been a big part of Barbara’s life, music was also important to her while growing up in England. Like many of us, radio was a huge influence in our youth. The radio was on all the time in her house and she soaked up everything she heard. As far as actually playing an instrument, Barbara shares a pivotal moment in her musical development: “The breakthrough came when I was nine and was allowed to play a piano at a friend’s birthday party. It was a revelation! Of course I couldn’t play at all but I enjoyed it so much that I badgered my parents into buying me a piano for my tenth birthday. Then followed eight years of classical piano and theory lessons and exams with the Associated Board of the Royal Schools of Music. Along the way I added in other instruments and learned to play from friends.” 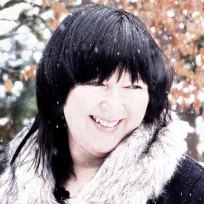 they knew that was what they wanted to do with their lives. What I find fascinating with Barbara is that rather than The Beatles, she mentions their producer/engineer Sir George Martin as an influence on her. As she describes: “I would have to include George Martin for introducing me to the concept of sound manipulation. He’s a giant of a man as far as British popular music is concerned. From childhood upwards I reveled in his work – from the classic comedy singles to the Beatles and beyond. The way that technology has developed has to be a major influence, too.”

Journeying from the past to the present, we come to Moon and Shadows. Actually, the idea of a journey is a central theme of this project, which Barbara characterizes as: “a double album describing a series of journeys. Lots of the tracks (though not all!) have been inspired by real experiences. We move through the desert, to the arctic, through woods, into caverns, under the ocean, into space, beside castles – to all sorts of places. I am painting in sound. The idea is that you imagine yourself into the journey.” The two discs entitled “Moon” and “Shadows” were originally separate albums recorded at different times. However, due to circumstances beyond her control, they were not released, and now Barbara felt the time was right to put them out together as one double album tied together by the concept of journeying.

Barbara deserves all the credit for this ambitious project. As she relates: “I play all instruments on all 24 tracks of the album, most of which are very layered. I use the following instruments: synthesizers and a variety of software packages, acoustic/electric guitar, bass guitar, autoharp, melodica, mandolin, violin, psaltery, recorder, and a mixture of percussion instruments. I also record and incorporate lots of other natural and environmental sounds. The odd vocals are mine, too.”

So lets dive in and see what kind of pictures in sound are created here. With 24 tracks, there isn’t room to go into detail on all of them, but I’ll be happy to share what are some of my highlights and favorite moments. On the first disc entitled “Moon,” I particularly liked the tonal palate Barbara paints from on a track called “High Pines.” Rich string orchestration is adorned by bright tinkling notes that fall like rain on the treetops. Breathy tones, plucked harp strings, and nature sounds add to the enchantment. Swirling synthesizers and bubbling water create an aquatic ambience on the appropriately titled “Hidden Depths.” From this watery world, we travel to the expansive realms of deep space on “Galaxies,” with its spacious electronic atmosphere. 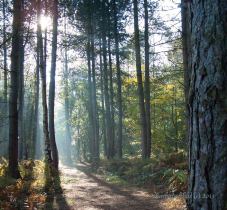 “Moon On The Moat,” touches on Barbara’s English folk music roots with a kind of storybook feel to it that is quite lovely. Like most of the songs on this album, “Woods After Rain” is based on actual experiences Barbara has had. Here she describes the inspiration for this song: “As we walked in the semi-darkness between the trees, the rain suddenly stopped. The clouds parted and the sun broke through. The dark wood disappeared, totally transformed. Every branch, every leaf, in fact every wet surface, shone; drips were falling lights. And then all the birds suddenly sang. The rest of the walk was sheer delight. It was one of those peak experiences that you want to collect and keep!”

On the second disc entitled “Shadows,” the mood becomes mysterious as we explore the underworld on a track called “Caverns.” This is more of a soundscape than a melodic piece, and is especially suited for listening with headphones for all its trippy little sound effects. A very different ambience is heard on “Kingdom of the Swan,” that evokes a more bucolic atmosphere that felt like a pleasant day in the English countryside. One of my favorite tracks was “Snowflakes,” with its sparkling bell tones and percolating sequencer painting a tone poem of a winter wonderland. Also along these lines is the luminous “Northern Lights,” that portray in sound the enigmatic aurora borealis. Another favorite towards the end of the album was a diaphanous

synthesizer soundtrack called “Return Of The Butterflies” that was also particularly enjoyed with headphones.

As we have seen, nature plays a major role in Barbara’s inspiration and artistic expression. In her words: “The natural world is a tremendous influence in all my creative work. I see it as God’s artwork – impossibly tiny, awe-inspiringly huge, everything between and every colour and mood, frighteningly destructive and mind-bogglingly creative. How can it fail to inspire?! “ Translating that into sound has been Barbara’s mission. As she explains: “For me, music is a way of speaking that conveys so much more than I could do in any other way. It can express a sense of place along with associated feelings and memories. It’s a voice from depths and heights that eludes other kinds of communication.” 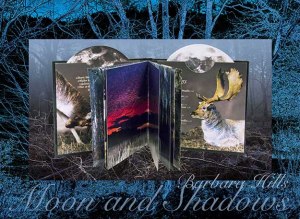 With two-dozen tracks, Moon and Shadows is certainly a generous offering that covers a lot of diverse musical terrain. And as with any album, especially a double album, there were some songs that appealed to me more than others, but that is to be expected. However, Moon and Shadows has something for everybody and illuminates a full spectrum of Barbara’s sound painting talents. And, once again, the exquisite artwork adds a great deal to this lovely package. I’ll be interested to hear subsequent albums from Barbara Hills as she continually refines her craft and evolves in her own unique musical expression.