Maneki Neko (pronounced Ma-neh-kee Neh-ko) is the nom de plume, or more accurately, the musical identity of composer, soundscape artist, and recording engineer Al Mikula who specializes in electro-acoustic ambient music for yoga, relaxation, meditation, and massage therapy. The name he has chosen, Maneki Neko, has an interesting story and interpretation behind it, and translates as “beckoning cat” in the Japanese language. (“Maneki” = beckoning, welcoming, or inviting. “Neko” = cat.) According to Al: “The Maneki Neko is a figure of Japanese tradition. His image is found in many places of business to welcome customers and prosperity, and in homes to welcome guests and luck. In the ‘digital world’ this timeless good luck charm can be found on websites where he welcomes Internet surfers, or dangling from cell phones as a cell phone charm.” 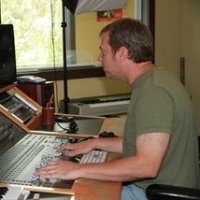 life. Although currently living in Austin, Texas, he was born in Hawaii and raised around the world in places as diverse as Iceland, Southern California and New England. Al also traveled around the world at an earlier stage of his career in interactive digital video and audio, absorbing the sights and sounds of far away lands.

The title of his latest release, muichi motsu translates from Japanese as: “to hold nothing.” Al describes what this means to him in relation to his music: “The gently shifting motion of these eight sound meditations creates energy without meaning, glimpses into untethered expectations. Looping lush textures blended with flutes, bells and percussion fuse into a deep ambient space to encourage the mind to let go of expectations of how things ought to be, and be satisfied with how things actually are.” As mentioned, the music of Maneki Neko is well suited for higher vibrational states, as summed up in his philosophy: “Sound is a core element in almost all meditative traditions. Sound can really change the way we feel – our heart rate, brain waves, and muscle tension. With my music I try to blend the musical traditions I experienced around the world with ambient sounds that let the listeners relax or explore through meditation.”

The album opens in absolute Zen-like simplicity with a track called Chadō, which is named for the highly ritualized traditional tea service in Japan. The sound of the elements predominate as reverberations of a metal gong set the stage for the blending of earth and air via shakuhachi flute and earthy wooden percussion. Space plays as much a part as sound in this minimalistic prelude. The theme of the balance of elements carries over into the next track entitled “Between Heaven and Earth.” Not nearly as sparse, however, with a lush bed of ambient synthesizers providing a dreamy backdrop for fluttering flute and bells, reflecting the dualistic nature of reality as seen in the teachings of Daoism which inspired this song.

A track entitled “Water Margin” is named for one of the four great classical novels of Chinese literature. In this piece, as well as others, one of my favorite aspects is the blending of ethereal electronic textures with more traditional Asian instrumental sounds. This one was also enhanced with the rumbling of distant thunder. The traditional/contemporary, East-West fusion continues on the next track, “Maitreya,” the Sanskrit term for the “future Buddha.” Another reference to Eastern terminology is found in the title for a song called “Ajna” which is Sanskrit for the sixth chakra, commonly known in the West as the “third eye.” According to the song notes: “This is a very inward searching song. It’s about the eternal search for inner peace and tranquility.” At over 10 minutes in length, it is one of the longer tracks on the album, unfolding gracefully as it weaves a meditative spell.

“The Deeper Well” is perhaps the most experimental piece on the recording and contains a number of fascinating studio sound manipulations to achieve its otherworldly ambience. As a recording engineer myself, I appreciated the description in the song notes on the Maneki Neko website about how these effects were created. Very cool and innovative! The album’s longest composition is the appropriately titled, “Adrift,” whose name perfectly describes the feeling of the piece. Interestingly, the final track, “Morning Mist,” was actually the first one finished for this release. The title of this one is also quite descriptive of its misty atmospheric ambience. There is a cinematic quality to this track, although the same could be said for others as well. 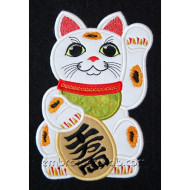 I really enjoyed the gentle meditative presence that the music of Maneki Neko exudes. The integration of traditional Asian instruments with ambient electronic sounds brought to mind the well-known concept of yin and yang or balance of opposites. Another Eastern concept I encountered on the Maneki Neko website is that of Dāna, which translates as “unattached giving” or “the practice of cultivating generosity.” What this refers to in this context is a page by this name on the site where a number of tracks are given freely for download as part of a practice found in Buddhism and other Eastern paths. A caption at the bottom of the page reads: “Return the karma and give to others unconditionally.” I thought this was a really nice touch and speaks to the devotional energy that pervades the recording and the website in general. The album is a wonderful follow up to the debut release from Maneki Neko entitled Auracle, which was said to “combine traditional instruments and melodic structures from cultures with long-standing meditative traditions to build soundscapes that aid the 21st century meditator on a relaxing inner journey.” The music on muichi motsu follows in this tradition and is sure to appeal to spiritual seekers or anyone wanting to create a peaceful and relaxing environment.