It’s been exactly 3 years since I wrote about Richard Carr’s previous album Soul Rekindled and quite a number of changes have taken place in that time. Soul Rekindled was a solo piano representation of Richard’s spiritual journey after Hurricane Katrina, which affected him deeply having lived and worked as a performer in New Orleans for 10 years. In the last year, Richard has relocated to beautiful Monterey, California, south of San Francisco. Another change is that, unlike much of his music, this new release is not a solo piano recording, but features a number of world- class accompanists. For more information about Richard’s musical background and the extensive array of musical projects he’s worked on, click on the link to Soul Rekindled.

For this album, Richard chose to work with one of the premier producing teams in this genre of music, namely Windham Hill Records founder and Grammy winner, Will Ackerman, along with co-producer, engineer, and multi-instrumentalist Tom Eaton. The recording was done at Will’s iconic Imaginary Road Studios in Vermont, where Richard had access to their highly modified Steinway piano, which has graced the tracks of countless albums on the Windham Hill label and many more. 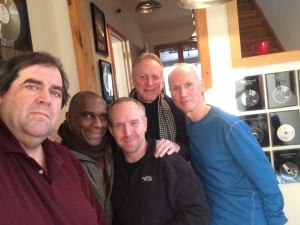 In my interview with Richard, he shared some behind the scenes insights about the creative process for this project: “This album is the first working with Will Ackerman and Tom Eaton at Imaginary Road Studio. My mode of recording has always been as an improvisational process…very little has ever been already created before I recorded in the studio.  Editing has never been a part of the process either (which, some will argue, has been one detractor from some of my previous albums). However, my mode of recording is certainly not like Will’s mode of working in a studio.  We had to come to a meeting of the minds in how we were to work together … and even IF we would be able to work together.  Originally I told Will that if he didn’t feel like he could help me, I would just use the studio with Tom as the recording engineer.  Within the first 20 minutes, Will said over the headphones … ‘We can certainly work with this format.’   Making slight adjustments in our individual processes on each side … we came up with something that is really special in our minds.”

And I would agree that this is indeed, a very special album. The opening track is “Ascendance,” and features Richard on piano, of course, accompanied by one of my favorite musicians, Jeff Oster on ambient flugelhorn. According to Richard: “’Ascendance’ was originally to be solo piano to replace another solo piano creation that didn’t want to be recorded. Once I finished the improvisation I said, ‘I hear Oster’s horn on this one.’ Will immediately responded ‘So do we!’  This indicated to me how much we were together in the direction of this album … from the original fears that each of us had.” The piece has a mellow dreamy ambiance that evokes the feel of kicking back and watching the clouds drift by on a summer day. I love the atmosphere it created and makes for a perfect introduction to the album, drawing the listener into its gentle impressionistic soundscape.

This feeling continues into the next song, “Awakening Spirit.” Richard’s 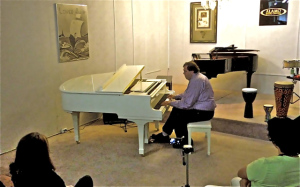 melody is gorgeous, and for me quite heart opening. It begins as a piano solo until about half way through, he is joined by long time Will Ackerman collaborator Jill Haley on English horn, cellist Eugene Friesen, who is best known as a member of the Paul Winter Consort, and Tom Eaton, who stepped out from behind the recording console to play bass. I doubt there are many instruments Tom doesn’t play, and he frequently appears on Imaginary Road recordings on a variety of them, as well as on his own music. Track 3, “Looking Inward” is the first of three solo piano pieces on the album. As the title implies, it is appropriately meditative with a nice balance of notes and space to allow the composition to breathe. A composition entitled “Pure Love,” has lovely melody that pulls gently on the heartstrings. And speaking of strings, Richard is joined by superstar violinist Charlie Bisharat, who has played with everybody from Yanni and Kitaro to Keith Urban, Patti LaBelle, The Rolling Stones, and a huge list of other top recording artists. Here, his touching violin solos add a deeply sentimental air, which is further enhanced by traces of Jeff Oster’s haunting horn playing.

Another highly regarded horn player joins in on “Song for Sy,” which according to Richard, “was a re-creation of an improvisation originally created for a memorial service.” Adding his magic on soprano sax is Premik Russell Tubbs who has also played with an extensive list of musical luminaries including Santana, Lady Ga Ga, Sting, Ravi Shankar, and many others, too numerous to mention. Along with Tom Eaton on bass, the music provides a tender tribute to someone who meant a lot to Richard. Also making an appearance in one song on the album is fretless bassist extraordinaire, Michael Manring, who is well known for his work on countless Windham Hill albums and more, including most currently Jeff Oster’s band. On this track entitled “Searching For Balance,” he is joined by cellist Eugene Friesen and Jill Haley on English horn. There is a real storytelling quality to Richard’s expressive melody here that takes the listener along on his search. 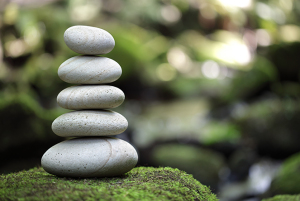 Living up to it’s title, with perhaps the slightest hint of wistfulness, is “Serenity,” the second of Richard’s solo piano pieces. The third piano solo, “Into Balance,” is also quietly self-reflective. However, sandwiched in between these two solos is the album’s largest ensemble piece, “The Call,” that along with Richard on piano, features two more frequent Will Ackerman collaborators, percussionist Jeff Haynes, and Noah Wilding on ethereal vocals, along with Jeff Oster’s flugelhorn and Tom Eaton on bass. Although this is a larger grouping of musicians, like many Imaginary Road recordings, the accompaniment is often understated, keeping the primary musician in the spotlight, although this particular song uncharacteristically begins with a flugelhorn solo, which was an interesting change up. The album draws to a serene conclusion with a track called “Inner Peace,” a lovely duet between Richard on piano and Jill Haley on English horn.

To characterize the overall ambiance of this recording, I would flash back to the motto of the Woodstock generation with the words “peace and love.” Richard’s compositions evoke a deep emotional resonance that touches the heart in ways that are both moving and uplifting. His ever-evolving spiritual journey and search for inner peace is reflected in the tranquil mood his music creates. According to Richard: “There is a healing side to my music as evidenced by many telling me how it has affected them in positive ways.” Matters of Balance is perfectly titled and clues the listener into the oasis of calm found within its 11 exquisite tracks.

Having heard some of Richard’s previous solo piano recordings, it was

interesting to hear him in these various ensemble settings. However, something I’m equally interested to hear is something Richard let me know that he will be working on in the near future. Unlike many other classically trained pianists who only play piano, Richard is also adept in the use of synthesizers, and is planning some recordings in the electronic realm soon. But I’m sure that whatever he applies his creative touch to, it will embody the heart and soul that has been the hallmark of Richard Carr’s music over the course of his long and productive career.