The concept of “samsara” as it is found in Eastern religions such as Hinduism, Buddhism, Taoism, and others can be translated as “cycles of existence” or “continuous flow” and relates to the repeating cycle of birth, life, death, and reincarnation. This is a belief that is very familiar to composer/ producer Ricky Kej who was born and raised in India and continues to live and work in the city of Bangalore. While his life there would seem to be worlds away from that of South African composer/ flutist Wouter Kellerman, the two have found common ground musically and have woven together the disparate elements of their cultural backgrounds on this ground-breaking recording that features over 120 musicians from five continents. Winds of Samsara gives new meaning to the term “world music.”

According to the album’s liner notes: “The deep bond between Kellerman’s South Africa and Kej’s India touched the creation of this project at its core. The countries share legacies of peace led by Nelson Mandela and Mahatma Gandhi, national fathers who inspired Kellerman and Kej and are each honored with songs (and quotes) on this album. Gandhi spent more than twenty years in South Africa and started his road of peaceful resistance there, something Nelson Mandela was very inspired with. We wanted to honor that history, that spirit, and that connection between our nations in our music. Winds of Samsara speaks to themes of peace and positivity, spinning together forward-moving harmony, progressive composition, and technical prowess with verve and passion.” 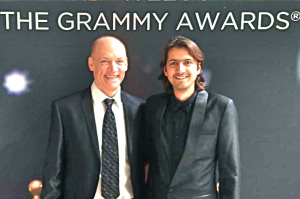 Wouter Kellerman is one of his country’s most innovative instrumentalists who “finds his inspiration in the spaces between cultures and countries, genres and disciplines.” His album Two Voices won the 2011 South African Music Award (the nations’ equivalent to the GRAMMY Awards) for Best Instrumental Album. In just the past few years he has performed in Berlin, Shanghai, New York, Sydney, and beyond, including an appearance in front of 700 million people as part of the 2010 FIFA World Cup Ceremony. His musical partner, Ricky Kej, who played synthesizer, keyboards, bass, and mixed the album, has had an equally illustrious career. He has composed music for five feature films, twelve albums released by Universal Music, and over two thousand commercials seen by audiences around the world. Ricky also composed music for the opening ceremony of the Cricket World Cup 2012, held in Dhaka, India; the ceremony was telecast to over 200 countries, leading to him being declared an “India Rules Artist” by VH1 in 2013. His most recent award-nominated CD, Shanti Orchestra (with a guest appearance by Wouter Kellerman), can be found featured here in Music and Media Focus. The “unlikely but star-matched collaborative duo” shared writing, arranging, and producing roles on Winds of Samsara. 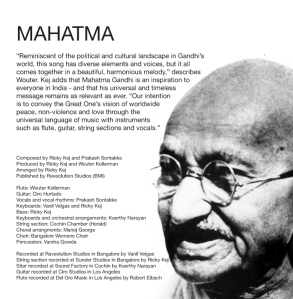 to say that the level of musicianship is truly world-class and features a veritable United Nations of instruments and vocals in a variety of languages. The album opens with a tribute to Gandhi, appropriately called “Mahatma.” According to Ricky: “Our intention is to convey the Great One’s vision of worldwide peace, non-violence and love through the universal language of music.” With a cast of musicians that includes flute, Spanish guitar, bass, vocals, keyboards, string section, women’s choir, percussion, and more, the piece can best be described as “epic” – a term that could equally be applied throughout the album’s 14 tracks. I was continually impressed with how they managed to incorporate not only a wide diversity of elements, but huge numbers of musicians without having the compositions feel cluttered or overwhelming – in fact, sometimes quite the opposite in its meditative spaciousness. On “Crystal Moon,” which is incidentally the first piece of music that Wouter ever wrote, his flute takes wing and reaches for the heavens. As a featured instrument on the album, many different spaces are explored and I can honestly say that I experienced a number of unique flute techniques and playing styles that I’ve never heard before – very impressive. 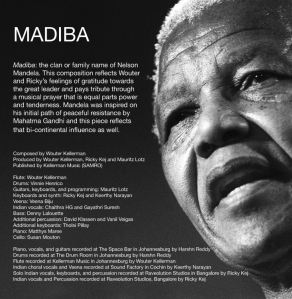 The thematic focus shifts to the great Nelson Mandela on a track called “Madiba,” which is his clan or family name. While one might expect a traditional African rhythm to predominate, Ricky and Wouter in the true spirit of Mandela’s legacy have chosen to represent him in a more universal light with many international influences on this gentle and loving tribute. And speaking of love, the next track entitled “Longing,” is described as: “Unhurried, lilting, and deeply nuanced…a song about pure love and devotion.” I’m not surprised that Ricky would have included this on the album,  as well as the exquisite video created for it, considering that he recently met and married his soul-mate, the lovely Varsha Kej who I had the pleasure of meeting on their recent visit to San Francisco.

In describing the previous song, the word “nuanced” was used. As I listen to the various tracks on the album, this is a term that is quite appropriate. I greatly appreciated the sense of dynamics found in the music – it’s peaks and valleys, changes in energy, and the exquisite attention to the smallest details that distinguish this recording. One song I found particularly touching was the beautiful “River of Time.” Sung in the South African Tswana language, the piece pays tribute to a lost loved one and the transient nature of life. Accented by the sound of flowing water and featuring a gorgeous flute solo by Wouter, I was taken by the poignant nature of this tune. Among the surprises and delights on this album of mostly original music was a track called “Remembrance” – a stunning rendition of the classic “Greensleeves.” According to the liner notes: “Out of countless melodies, only a small few possess the indescribable qualities that allow them to transcend time and cultural barriers, entrancing listeners across oceans and ages. This wistful, centuries-old English folk song, retold here through Indian and African voices as never before, is one.” Hearing “Greensleeves” played on a sitar is truly a unique experience.

On “Mountain Solitude,” as on many (if not all) of the album’s tracks, the lush orchestration had a cinematic quality that 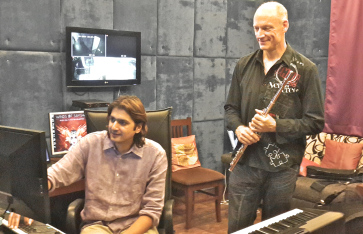 evoked detailed images in the mind’s eye. Ricky’s tasteful keyboard and bass playing add solid support and textural interest to many of the songs. One of the standout pieces that highlighted Wouter Kellerman’s flute virtuosity was a track called “Desert Wind,” where his breathy melodies danced on ambient soundscapes and earthy rhythms. Although, as I mentioned, there are so many musicians on this album that I wasn’t going to go into detail on them, I cannot possibly not mention the special guest appearance of one of my favorite recording artists – Australian pianist/ composer Fiona Joy. After witnessing her performing in Melbourne, Wouter was inspired to have her play on this album. Here she adds her gentle artistic touch on this deceptively simple reinvention of her composition “Grace” – just lovely. Bringing the album to a surprise conclusion was an unexpected rendition of Chopin’s “Nocturne” featuring pianist Michael Lewin. According to Ricky and Wouter: “We set about fusing Michael’s work with our own, while still keeping the spirit of the piece intact. A challenging — and satisfying — project!” I guarantee that you have never heard this piece performed like this, and I applaud them for their success in this bold undertaking.

The collaboration of Ricky Kej and Wouter Kellerman on Winds of Samsara is stunning, to say the least. The fusion of so many diverse elements practically defies imagining. The album is so rich with sonic detail that one listening barely begins to scratch the surface of the musical world contained within. After writing about Ricky’s previous album, Shanti Orchestra, I knew that he was a rising star and truly a producer to watch. His work on Winds of Samsara only furthers this perception and reveals the evolution in his work. Wouter Kellerman brings the same level of excellence both as a producer and instrumentalist and there is good reason he is emerging as a major player in the world music scene. Winds of Samsara is a production of truly epic proportions and a perfect example of the ideals of peace and global harmony espoused by Gandhi and Mandela, providing a not to be missed musical experience.