Equilibrium, the impressive new album by Kerani is the follow up to her chart-topping previous release Arctic Sunrise, that I had the pleasure of writing about, and which won the Best Neo-Classical Album in the 2014 ZMR Awards. Arctic Sunrise was a concept album that Kerani described as “ a true tribute to the mysterious worlds of ice.” So, not surprisingly, Equilibrium is also a concept album, although with a very different theme. In her words: “With this album I wish to bring homage to all women who took it upon themselves throughout history to go against the tide.” The recording honors the women of the world, feminine energy, important women in history, and female traits and talents. She goes on to say: “I want to see a return to the original perfect male-female balance of harmony and equality on our planet.”

The project has had an interesting evolution. About a year ago, before the album had a theme, Kerani composed a piece entitled “O, Aeterne Deus” (track 6 on the album) that was inspired by her love of medieval Gregorian chants and the deeply spiritual atmosphere they created. Part of the song uses the lyrics of a 900-year old antiphon composed by the German abbess Hildegarde von Bingen, who was also the first female composer known in history.

As Kerani shared with me in our interview: “Then came ‘Lady’s Grace’ (track 7). This song tries to capture the beauty and elegance of women. When this track was finished, I took a step back to observe what direction I was heading in… and it soon became clear. This album was to honor the feminine energy in the world. So I decided to write tributes to women who changed history, who had a vision or followed their calling. I could have chosen Joan of Arc, Cleopatra, Anne Boleyn or Mother Theresa, but that would have been too obvious a choice, so I opted for less known historical figures instead.”

In her work as a recording artist and film composer in Holland, Kerani uses piano, vocal, and synthesizer 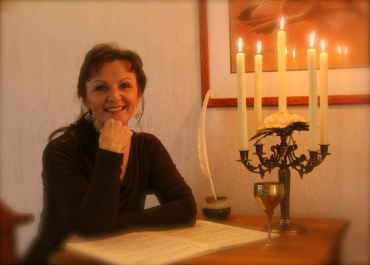 sounds, particularly those of an orchestral nature to craft her lush elegant compositions. Here on this album, she is joined by a number of distinguished European musicians on violin, viola, trumpet, flutes, vocals guitars, and dobro, The early influence of classical composers such as Mozart, Liszt, and Shumann is evident, as are hints of electronic musicians like Vangelis and Jean-Michael Jarre that she gravitated to later in her career.

The album opens with the title track, “Equilibrium,” that Kerani describes as her “dream of a world where the male and female energies are in balance and harmony… where men and women accept and respect each other as they are, and treat each other as equals.” While the piano melody is simple, the symphonic cocoon it emerges from is deep and multi-layered. Neo-classical elements abound in the song’s lavish string arrangement that at times reminded me of Yanni. There is a lot going on below the surface that I became more aware of in listening with headphones. As the piece evolves, percussion adds, not only motion, but a dramatic effect as well.

A very different sonic scent emanates from the next track, “Fragrant Mountain,” which is dedicated to the Asian deity Quan Yin who dedicated her life trying to end suffering. “Fragrant Mountain” is named after the place where Quan Yin meditated in a temple. Today, this place is a sanctuary that is frequented by thousands of pilgrims every year. The song is appropriately graced by the sounds of Oriental instruments like shakuhachi flute and koto harp. Not surprisingly, much of Kerani’s music has a distinctively cinematic quality and this piece is no exception as it moves through passages that are alternately delicate and powerful.

In reading about a track called “Anchoress,” I learned something that I found a bit shocking by today’s standards. According to Kerani: “an anchoress was a deeply religious woman who chose to live her life in seclusion, entirely dedicated to God. She was literally walled-in and lived in a tiny cell that was anchored to the church. There were many women-anchoresses in that period of time. Composition wise, I tried to describe the solitude and devotion of these women.” A particular musical element I found intriguing was Kerani’s use of synthesizer textures that were atmospheric rather than orchestral. I was also moved by the ethereal female vocals that added another dimension to the sacred solitude portrayed in this composition.

Further evidence of Kerani’s musical range on the album is illuminated on a track entitled “Bouddica, Heart On Fire,” with its Celtic and Roman influences, and is named for a Celtic queen in the year 60AD, whose army valiantly fought the Romans. With its stirring music and impassioned chants, the song almost sounds like it could have come from the movie “Braveheart.” One thing I found intriguing on a song called “Hypatia’s Universe,” was the use of contemporary electronic sequences and electric guitars to tell a story centered in ancient Egypt. But given that Hypatia was an astronomer, mathematician, and philosopher, it all seems to work, as Kerani bridges the centuries like an experienced time traveler.

In an interesting juxtaposition, “Avane,” the most serene song on the album, which celebrates the miracle of life and birth, is followed by the closing track, “The Wyse Wytch,” which recalls the death of approximately 60,000 souls who were accused of being witches and brutally executed in Europe and North America between 1450 and 1750. While the song has somewhat of a wistful air, it’s not depressing and has a reflective and historical feel to it that could best be described by the term “bittersweet.”

With Equilibrium, Kerani has created another musical masterpiece. I was completely enamored with her previous release, Arctic Sunrise, and am just as taken with this one. My deep appreciation extends to a couple different levels. One is the theme of this recording, of which Kerani says: “The music on this album honors the Highest Feminine Energy; the energy that increases the flow of love in the universe with unconditional oneness and understanding and with an empathy that vibrates through the hearts of all. Unfortunately, today, women are still very far from where they belong in terms of equality. I hope and pray that the next generation of daughters and granddaughters will regain their position.“ And I couldn’t agree more about the need for balance of male and female energies, especially given the state our world is in as a result of the male-dominated, testosterone-fueled quest for power and domination. So I must commend Kerani for her focus on this vitally important need.

In addition to the album’s theme, I am profoundly impressed with Kerani’s musicality and creativity. Her skills

as a composer, arranger, and instrumentalist are stellar. Kerani is also a first-rate storyteller, who brings each of these historical figures to life in a way that resonates deeply with listeners and gives a sense of these lives that have been obscured by the mists of time. On a technical level, Kerani’s use of electronic keyboards to create orchestration is breathtaking – in fact, some of the best I’ve ever heard. And her integration of guest musicians in the mix was brilliant. As well, speaking of the technical side of things, I must acknowledge the excellent contributions of Arno Op den Camp who was responsible for sound design, mixing, and mastering, as well as graphic design and layout of the album’s artwork. As a follow up to her previous award-winning album, Kerani has exceeded all expectations, and has set the bar quite high for her next release. But I have no doubt that Kerani will continue to dazzle listeners with her audio artistry as she continues to evolve into one of the premier talents in the new age music genre. I am beyond impressed with her work and cannot recommend it highly enough.