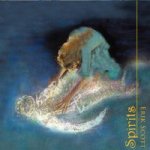 The old saying: “expect the unexpected” is certainly appropriate, and perhaps even a bit of an understatement, when referring to the music of veteran bassist Erik Scott. I doubt whether there are many artists producing music in the instrumental new age genre that have a more extensive, impressive, and quite unlikely discography as he does. 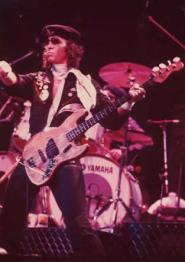 A professional musician since the 1970’s, Erik has serious credentials in the rock music arena, having played with Flo and Eddie (from The Turtles and later with Frank Zappa), shock-rocker Alice Cooper, Sonia Dada, Ted Nugent, drummer Carl Palmer (from Emerson, Lake, and Palmer), and many more. In his years with Flo and Eddie, they shared the stage on tour with Jefferson Starship, Steven Stills, Fleetwood Mac, and The Doobie Brothers. Beyond his rock background Erik has also played with pop vocalist Kim Carnes, gospel royalty Mavis and Pops Staples, and many more. In addition to providing bass and vocals, Erik has done his share of writing and producing for many of these high profile artists and others. He has also had his music used in major Hollywood motion pictures and popular TV shows like Charlie’s Angels, Starsky & Hutch, and The Loveboat. Now, at the age of 67, Erik shows no sign of slowing down as he writes yet another chapter in his musical saga.

Although he is not slowing down, perhaps Erik is mellowing a bit. His third and latest solo release, Spirits, is light years away from the kind of music he made a name for himself with in the past, and shares more in common with new age artists like bassist

Michael Manring and Patrick O’Hearn (who incidentally is a Zappa alumni himself.) One of the distinguishing characteristics in Erik’s music is the way he brings the bass out front as a lead instrument. In his own words: “In the last ten years, I have been unable to resist a more un-conventional approach in my own bass playing. Using the electric bass as a main melodic element in the music, and employing some effects traditionally reserved for guitars and the other instruments carrying the load of melody, can annoy some bass purists, but I think there should be no rules in art, and at the age of 67, if I don’t give free rein to my ideas… if not now… when?”

So what are these new ideas and directions? Although I said to “expect the unexpected,” I was not prepared for when I put on the album for the first time and the opening sound I heard was a pedal steel guitar! It provided a dreamy ambience that floated over a laid back percussive bass groove, which for some reason, reminded me of a classic U2 song. Also, as mentioned, melodic bass lines were part of the mix as well. Trippy electronic effects added to the alien atmosphere of this track, appropriately titled “Peace On Saturn.” This is one unique composition that makes for a great start to the album, and it definitely whet my appetite for what might follow.

And the journey does continue along these lines with track 2, “Other Planets.” This one features even more of Erik’s lead bass as well as a loping drum beat, percussion, electric guitar, and a mélange of psychedelic sounds. It would be easy to assume these were created on synthesizers, but they are actually what the liner notes refer to as “bass generated FX.” While Erik is listed as the creator of these effects, as well as playing fretless and fretted bass, baritone guitar, drums and percussion programming, and keyboards, there are also quite a number of guest musicians who play a variety of instruments on one track or another. One of these accompanists is Shira Kammen whose sensual violin playing adds a quasi-Celtic air to track 3, an instrumental version of “Free,” which appeared with lyrics on an earlier release. Another ethnic flavor, this time Latin, is provided by the acoustic guitar of Glenn Rupp on track 4. But for me, what makes this track, as well as others, are Erik’s soaring fretless bass melodies.

Pirruccello on steel guitar, whose title “Weightless” perfectly captures the vibe of the piece. John also plays mandolin on a track called “Run” that goes even a bit further into the aforementioned Celtic influence with the addition of flute and English whistle, percussion, and organ. However, I’ll emphasize the word “influence” as this is by no means a Celtic tune in the traditional sense. This is one of the many things I appreciate in Erik’s music; the way he is able to incorporate traces of various musical genres without loosing the uniqueness of his own very original musical expression.

That originality is even present when he is covering someone else’s song, as he does on a stunning rendition of The Beatles’ “Yesterday.” I’m sure that Lennon and McCartney could not “imagine” the melody line of this much beloved classic played on fretless bass and pedal steel guitar. Although Erik did not write this song, the lush interpretation heard here serves to highlight his outstanding skills as an arranger as well as a multi-talented instrumentalist. I also appreciated Erik’s arranging and composing abilities on the cinematic, Celtic-tinged, “Battle For Neverland (Remix).” If there was ever a song that would serve perfectly as a film soundtrack, this is it. The composition, with it’s rich orchestration of bass, drums, organ, violin, and electric guitar, flows through various movements, with some of the most fascinating twists and turns I’ve heard in a while. The album draws to a close with the unusually titled “Encore… Gypsy Mother And The Royal Bastard,” which is alternately stately and majestic, as well as funky and grooving, powered by a contemporary hip-hop beat. Again, Erik’s use of interesting transitions is nothing short of masterful. 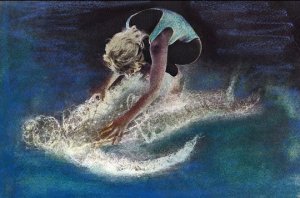 Listeners who are seeking something daringly original and extraordinarily unique need look no further than Spirits by Erik Scott. In his words: “As a child of the sixties, when we thought we could change the world with music, the instruments were our weapons, and I suppose it is some of that same spirit that keeps me and many of us looking for new ways of expression through the sounds that we make.” Erik’s album has far exceeded my wildest expectations and introduced me to a most imaginative artist who has reinvented himself to break new ground and explore uncharted musical territory. Spirits is a “must-have” recording for sonic seekers.