We’ve all heard the adage about “quality, not quantity.” That is most certainly the case with the new release from pianist Karen Marie Garrett, entitled It’s About Love. Although it is a 5 song EP, Karen has spared no expense to produce a recording that exemplifies the above statement to the nth degree. Before we even get to the music itself, let me say a few words about who and what went into the making of this album.

Mention the name Skywalker, and some of the biggest movies of all time immediately come to mind. Well, Karen’s album was recorded at Skywalker Sound Studios on the grounds of Skywalker Ranch in the San Francisco Bay area. Being fortunate enough to live near there and having been invited to view the facilities a few years ago, I can truly say that it does not get better than that! But in addition to the studio itself, Karen was also blessed to have her album produced and mixed 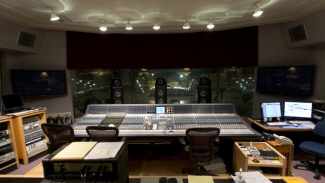 at Skywalker by multiple GRAMMY winner Leslie Ann Jones, whose credits include working with Carlos Santana, Herbie Hancock, Miles Davis and Quincy Jones, Jane Fonda, Holly Near, and a very long list of other major artists, as well as being involved in blockbuster films like Apocalypse Now and video game soundtracks for Star Wars, and much more. Leslie also engineered sessions for the iconic Windham Hill Record label and its founder Will Ackerman, who actually played an important role in Karen’s career development – but more on that later.

Although, speaking of career development, Karen’s musical path began with piano lessons at the age of 5. A life-changing event occurred when she attended a concert by piano maestro Van Cliburn while she was still relatively young. As Karen recalls: “It was one of the most incredible experiences of my life…I really buckled down after that… practicing the piano for long hours with passion. As a result the family moved the piano to other side of the home. They needed some quiet time.” Like many young students, she only played the music of other composers. Beethoven, Chopin, and Mozart were particular influences. The idea of creating her own original music was not on her radar at that time.

However, here is where Will Ackerman enters the picture. It was a number of years later when Karen discovered the music of the Windham Hill record label, and in particular, Will’s guitar recordings. In 2003 she felt compelled to send a recording of herself playing classical music to Windham Hill. According to Karen, Will liked it but wanted to hear some of her own original music. Although she didn’t have any, this request inspired her to compose two songs, which led to her working with Will and producing an album called Allure of Sanctuary in 2005. A couple years later, Will produced Karen’s second album entitled It’s About the Rose, which went on to critical acclaim and chart success.

While things were going really well for Karen, a few years later in 2011, some major medical issues occurred that made it seem that her music career was over. However, after a number of very intense years, she recovered and made the trek from her home in Hawaii to Skywalker Sound in California where this new recording took place. In an interview, I asked Karen where she draws inspiration from in her music and her life. To which she replied: “I think my experiences are at the core of my music. I am often inspired by what is present (in front of me) including my piano, and then I draw on my experiences to connect emotionally. I have to feel it to write it.” She went on to say: “To me, instrumental music is a universal language. I work to compose and perform music that will communicate and connect with listeners.”

The emotion that Karen spoke of when she composes definitely comes through in her playing and writing. The album opens with a heartwarming piece called “Abbie Marie” that was inspired by sweet memories of her adorable black Labrador puppy. The composition is a duet between Karen and the soulful cello work of Emil Miland, of the San Francisco Opera Orchestra. Karen’s piano playing on this piece is spacious, leaving ample room for give and take in the musical conversation with Emil.

That dialog between them continues on the next song, which is the title track. I appreciated Karen’s sense of dynamics in 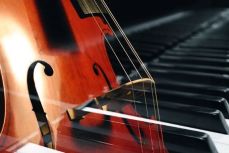 knowing when to speak softly on the piano and when to be more passionate in her musical statements. There is a beautiful sentiment behind this composition that Karen shared with me in our interview. In her words: “My husband started cello lessons soon after our wedding (2010) so “we could someday play music together. He patiently worked months with his cello to find the notes and tone. I could feel his love and dedication, and composed “It’s About Love” (cello and piano) for him.”

On the third track, “Deschutes River Sunrise,” the duo expands to a trio to include noted recording artist Nancy Rumbel on oboe. Nancy, one of my favorite wind instrument musicians, toured and recorded extensively with the Paul Winter Consort in the 70’s and 80’s, and is well known for her work for the past 28 years with the GRAMMY award-winning duo Tingstad & Rumbel. Karen’s inspiration for this piece draws from a memory of her youth: “I was a child the last time I visited the Deschutes River for any length of time. I can still hear the sound of the river, and remember opening my eyes to the sunrise painting the sky and landscape with color.” Similarly, these three talented instrumental artists paint their musical canvas with pastel hues, capturing the eternal flow of this peaceful river. Karen’s lovely piano work creates a foundation for Nancy’s oboe and Emil’s cello to soar gracefully over. I particularly like a movement in the song’s middle section where the oboe and cello play first in unison then in counterpoint, wending and weaving in pastoral harmony. 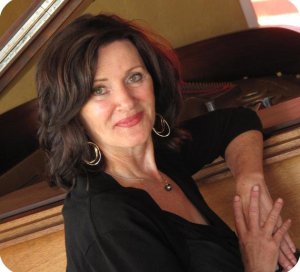 A composition called “Another Time,” is a piano solo that provides an introspective look back at an earlier time of Karen’s life. It’s a reflective piece with a bit of a wistful air that allows Karen’s heartfelt composing and piano playing to stand out unaccompanied, revealing much of the emotion that inspires her writing. The album concludes with an equally emotional piece entitled “Mother’s Prayer.” The song starts out as a piano solo, but adds a wonderful new element as it evolves – the wordless angelic vocals of Desiree Goyette. It’s a beautiful and moving composition, made even more so by knowing the story behind it. According to Karen: “I composed this piece in memory of my Mother, and recorded it on her birthday, November 11. She lived through an abusive childhood, and as an adult struggled with a chronic illness now known as Crohn’s disease. I am still amazed by her courage and faith in prayer during those difficult years. She introduced me to the piano when I was 5 years old, taxied me to and from weekly lessons, and listened through hours of constant practice. Mother passed away several years ago, but I still occasionally look toward the sofa and sense she is there listening and encouraging me.”

Karen Marie Garrett has made a triumphant return with her new release, It’s About Love. Her music is often understated, yet filled with deep feeling and quiet grace. And I appreciated the perfectly balanced interplay between her and the accompanists. This 5-song mini album doesn’t feel abbreviated in the least, but feels like full and satisfying listening experience that provides just enough of a glimpse into the artistry of this talented composer and pianist to make me look forward to her next recording.