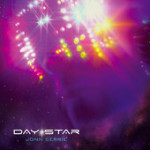 The earth has made many trips around the sun, twenty-seven to be exact, since as a budding new age music journalist, I wrote a review of Jonn Serrie’s now-classic debut album, And The Stars Go With You, back in 1987. That album was in memory of the astronauts lost in the Space Shuttle Challenger disaster the year before. Now, over two and a half decades later, Jonn is still traversing the galaxy producing new music starscapes, as well as giving innovative concert performances back here on earth. These celestial references are intentional, given that Mr. Serrie is a preeminent master of the genre known as space music. Since the 1980’s, he has released over 20 albums that reflect this with names like Flightpath, Planetary Chronicles Volume 1 & 2, The Stargazer’s Journey, Lumia Nights, and more, as well as composing and performing music for planetarium programs for three decades.

In addition, Jonn has worked on projects for NASA, Lucasfilm, IMAX, CNN, and more. In 1999, he appeared as a special guest of honor at the 30th anniversary of the Apollo 11 moon-landing mission, which was held at Cape Canaveral. Not surprisingly, Jonn is an aviator himself with advanced instrument and commercial ratings and flies for the US Air Force Auxiliary as a search-and-rescue pilot. Also in 2006, music from one of his albums was used in the hit Hollywood movie What The Bleep Do We Know? One of Jonn’s most recent accolades was performing in David Arkenstone’s epic multi-media event in LA, called Symphonic Adventure that featured a full concert orchestra and choir, the world famous Cirque de la Symphonie acrobats, Celtic dancers, incredible digital stagecraft, costumes, lighting and special effects, and an impressive display of musical talent.

Now, Day Star, the eagerly awaited sequel to his previous release, Thousand Star, has landed. Here Jonn explains a bit about the album and its place in his creative cosmology: “I wanted to create music that has real ‘theater of the mind’ potential, using a unique combination of music and sound design elements. Thousand Star, Day Star and Brilliant Evening Star as a trilogy project is really a three-part science fiction novel told with these elements. I wanted the audience to see and feel what I experience when creating it and when I listen to it. I wanted to eliminate any distance between the

audience and me. Day Star further explores deep space tapestries and galactic vistas, providing a rich sonic voyage with every listen. The album is intended to play as if the listener were taking part in an imaginary sci-fi novel told with music and sound.”

So lets strap ourselves in, commence countdown, and lift off on a grand aural adventure. Although as the album opens with the title track, it would seem that we are already plying the currents of deep space. As listeners of popular radio programs like Hearts of Space and Echoes will be familiar with, this is not necessarily music based on melody or common compositional structures. Often times the blending of the sounds and effects themselves are what create the musical context and content. This is a form that Jonn Serrie is an absolute master of, crafting ambience that leaves the listener adrift in diaphanous dimensions of instrumental expression. As a synthesist and sound designer myself, I am light years beyond impressed with the lush, dreamy, otherworldly tones Mr. Serrie is capable of evoking from his array of analog and digital synthesizers, which actually look like the flight controls of a starship when set up on stage. Their blinking lights, multi-colored LCD screens, and myriad of knobs, sliders, and switches are a perfect visual match for the spacescapes he creates with them.

Award winning visionary art film maker Ken Jenkins had this to say about the new release: “Jonn Serrie continues his long winning streak of gentle and warm celestial space music with this new album Day Star.  Floating, drifting, ethereal…” And while this description is spot on, Jonn occasionally integrates rhythmic elements, although ever so subtly. An example is in the middle of track 2, “Galaxy Prime,” where a rapid pulsing beat, low in the mix, evokes the feel of a throbbing hyper-drive engine, adding a sense of motion, without creating a “groove” or loosing the ethereal ambience. He also achieves this effect with the use of percolating arpeggiator patterns such as the ones that weave in and out of track 3, “M-Theory.” I particularly like how he varies the patterns so as not to become static, as well as using them sparingly.

Something else I enjoyed very much, in the beginning and ending of track 5, “The Antares Rift,” was the psychedelic montage of electronic blips, bleeps, computer sounds, and ghostly, echoed radio transmissions contrasted against a 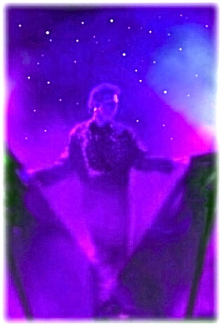 spacious ambient soundscape. I often found myself thinking about the cinematic quality of Jonn’s music and how perfectly it would work as a soundtrack to a grand space fantasy film. Although, as Jonn mentioned, his goal was to create a “theatre of the mind” feel and an imaginary sci-fi novel told with music and sound.” To which I would have to say: “mission accomplished.” Listening with headphones is especially recommended to further enhance the generation of mental imagery.

The last two tracks are the longest on the album, at approximately 12 and 13 minutes respectively. This added length gives Jonn an opportunity to really stretch out to paint some of the most expansive sound portraits imaginable. This is especially true of “Quantum Seas,” which manages to be simultaneously both aquatic and otherworldly, creating an imminently immersive audio experience. If I had to choose one word to characterize the final track, “The Sum Over Histories” – that word, like the title itself, would be “mysterious,” especially the first section. These opening couple of minutes conjured a scene in my mind of space travelers exploring a strange new world, unsure of what they will find there. However, this piece has many movements that morph and evolve in ways that Spock would classify as “fascinating.” A new element Jonn introduces is the sound of echoed bell-like tones that lend an even more exotic air to this alien sonic vista.

With Day Star, Jonn Serrie adds yet another space music masterpiece to his stellar list of recordings. While it serves admirably as the middle chapter of his trilogy, it also stands perfectly on its own as a complete listening experience in and of itself. However, after hearing it, those who may not have heard the previous album Thousand Star before this, will probably want to run out and get it, and will join the growing audience of fans awaiting the final installment of this enterprising trilogy. I must reiterate once again about the exquisite alchemical expertise of Jonn Serrie in conjuring and blending some of the most intriguing electronic sounds and effects imaginable. I could not possibly recommend Day Star more highly.