A great number of the instrumentalists I write about, and pianists in particular, tell of years of study, private lessons, music academies and conservatories, and the like. It’s not as often that I hear a pianist who has reached an extremely high level of proficiency with no formal training and being completely self-taught. However, Michele McLaughlin is one of them. From the age of 5 she was fascinated by the piano and remembers playing it for her class in show and tell. As Michele relates: “I’ve always had a musical ear, and could figure out any melody I heard.” While she tried taking lessons for what she characterizes as “a very brief moment in time,” she didn’t like it and didn’t continue with it. In a sense, you could say she was a student of Windham Hill solo piano recording artist George Winston – although she has never met him, so to speak.

Michele tells an interesting story about a life changing experience: “When I was 8, my parents took me to see George Winston in concert. We were right by the stage, on the left hand side, I could see his hands so clearly and closely and I was mesmerized. I remember thinking a wide-eyed “WOW!” After that I spent months learning how to play his songs by ear. I would put the CD in, listen to a few measures, and then plunk it out as best I could. Before long, I was playing entire George Winston tunes, and though I didn’t realize it at the time, I was also learning how to play. I just learned to play by listening to other musicians, and it wasn’t long before I was composing my own songs.”

While she was quite shy about her playing, in 2000 after being encouraged by her mom (Michele calls it “pestered,”) she recorded some of her compositions on a cassette tape and gave copies to friends and family for Christmas. The response was so overwhelming that Michele felt empowered to go for it and actually record a real album. Fast forward to 2015, and 15 albums later, Michele is now a well-recognized artist in the new age solo piano world. But beyond that, her music has received numerous awards, nominations, and accolades, as well as extensive radio airplay, chart success, critical acclaim, and album sales. In addition, Michele has become an in-demand performer who has shared the stage with many top solo piano artists such as Michael Dulin, David Nevue, Joseph Akins, Greg Maroney, and many more. She also runs her own in-home concert series in Salt Lake City, Utah.

In an exclusive interview, I asked Michele about her creative process and source of inspiration. 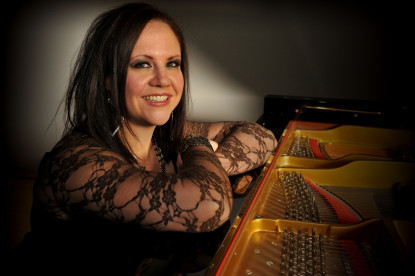 In her words: “I find so much inspiration in my daily experiences, or personal triumphs and setbacks I endure.  I tend to write based on my emotional state at the time I’m writing, however I’m feeling in a particular moment, and the music that comes out of me during those times truly becomes my musical diary.  My albums are usually theme based, all the music written around a 12-24 month period, and I tell a story of that time period with the music. Many of my songs are about places and things I’ve seen on my adventures around the world. Most of my inspiration comes from travel, things I experience, tragedies or hardships I endure, etc.” She goes on to say: “I am in a constant state of evolution and growth, and I’m always trying to improve my skills and stretch outside my comfort zone.  I write the music because I love to play and write, but I share the music because I love making people happy with music.”

So lets get happy and delve into the music on Michele McLaughlin’s latest release, Undercurrent. Speaking about being a prolific performer and drawing inspiration from her life experiences, the opening track, “11,000 Miles,” is a perfect example. As Michele explains: “11,000 Miles is about my US tour with Scott D. Davis in the summer of 2013. We played 30 shows, in 26 states, over a period of two months, and drove 11,000 miles on that giant road trip. It was so much fun, and this song is about our adventures on that tour.” This song makes a wonderful opening piece for the album and totally captures the sense of fun and adventure that Michele described. It is lively and upbeat with a rolling-down-the-highway feel to it. This being the first song of Michele’s that I heard, I must say that my response was somewhat akin to hers when she first saw George Winston – a big “Wow!” The thought that kept coming up for me was: “I cant’ believe this person is self-taught!” Her dexterity is notable and I was quite impressed with the composition itself, and particularly with some of unusual and unexpected chord changes she used. This was definitely an auspicious beginning to the album, which is followed by the lovely, somewhat more understated “Living In Awe.” 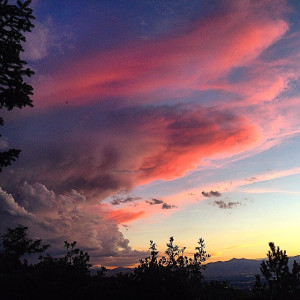 I greatly appreciated that Michele included liner notes, which gave a brief description of the inspiration behind each song. As I read them and listened to the tracks, I had an even greater sense of how well the music instrumentally portrayed the subject matter in the title. A good example was “Changing Skies,” which Michele described as watching the sky and clouds from the window of her mountainside home in the Salt Lake Valley. That imagery came to life in my mind’s eye as I listened to the composition in peaceful reverie. Another remarkable aspect of Michele’s playing is emotional spectrum she is capable of revealing in her music from one piece to the next. A case in point was the effortless shift from the gentle warm-hearted “Full Of Love” to the more pensive and wistful “The Space Between,” which follows it.

Michele enters some deep and thoughtful emotional terrain on the album’s title track. According to the liner notes: “Undercurrent is inspired by the Plato quote “Always be kind, for everyone is fighting a hard battle.” It occurred to me that while there are many aspects of our lives that may seem peaceful and calm and wonderful and beautiful on the surface, we are all battling something, however big or small, underneath.” This piece digs deep below the surface to uncover subterranean emotions, sometimes quite intense, as in the middle section. While it doesn’t reflect the sunny ambience of some of her other music, it truly highlights Michele’s talents as a composer and pianist. A perfect companion piece to this, which creates a yin/yang balance, is the hope-filled “Never Give Up,” which Michele dedicates “to all of the people who write to me to tell me that my music is helping them through difficult and dark times.” 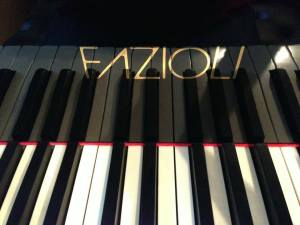 who truly deserves all the acclaim she has been receiving. I have no doubt that Michele McLaughlin is an artist we will be hearing more about as she builds a legacy with each successive release. As I have been touching on throughout this article, the thing that stands out to me most is the emotional evocativeness of Michele’s music, which, on one level, is the “undercurrent” of the album. In addition to the expressiveness of her keyboard technique and her depth and range as a composer, for me, this music is about the feeling behind it and the resonance it had within me. This response in the listener is of great importance to Michele, and I’ll leave the final words to her to share her thoughts about this: “I am blessed to be a full time musician making a living from the music I create, and my whole life is so deeply engrained in it that I can’t imagine anything different. For me, it’s my own personal therapy, and I love it so much. It makes me happy to know that my music is having an impact on people, and touching them or moving them in ways I can’t imagine.  I want to continue providing that. If I can make a difference in a person’s life with the music I create, then that is a very good thing.”