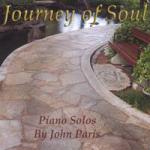 I’m sure there are many recording artists who have put a lot of time and energy into a project, only to listen to it at a later time after its been released and think, “I wish I’d done this, or I’m not crazy about a particular aspect of how this sounds.” And I’d imagine that a number of them would chalk it up to experience, leave well enough alone, and move on. Although pianist John Paris recorded and released his debut solo piano album Journey of Soul close to10 years ago some things about it just never felt right to him. So now, nearly a decade later, he wanted to rectify that, so he went back and re-mastered and re-released the album. During those intervening years he recorded two other solo piano CD’s, Reflections and Inner Voyage, both of which have been featured in Music and Media Focus. Since I detailed much of John’s background and musical history in the Reflections article, I’ll refer readers who might be interested to that. However, as a brief introduction, I’ll draw a quote from it: “From performing with the Minneapolis Symphony, to sharing the stage with the Moody Blues and other headlining acts, as well as appearing on the Merv Griffin Show and Jerry Lewis Telethons, John Paris has had a rich and varied career that spans four decades. While he has formal musical training from Concordia College and the University of Nevada, he was also “schooled” by a number of well-respected music teachers, including Dennis Sandoli who taught jazz greats John Coltrane and the Brecker Brothers.”

Speaking about the creation of Journey of Soul, John relates: “This was my first foray into solo piano compositions after playing in groups all my life. I wanted it to be spiritually uplifting and combine my Jazz ideas with melodic lines. It was my sticking my toe into the solo piano waters.” But like many first efforts, looking back at it over time, certain imperfections become obvious to him. Something was missing. For John, the sound of the piano never quite lived up to his expectations and was one of the motivating factors for the do-over. But there was something else, a bit more intangible, yet just as important. John always felt that on some level, the music lacked what he calls “heart.” In his words: “I can’t stand creating music without heart. This was the real reason for the re-master – to put the heart into the music. The nuances were buried. This bothered me for years. I knew I had to redo the Journey of Soul album so the music would be out for all to hear.” Following the album’s “heart transplant,” the music is alive and well and is now meeting John’s high professional standards. 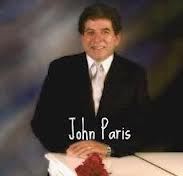 The album opens with the title track, which has an interesting back-story. John wrote the piece to be played at a major spiritual seminar in front of five thousand attendees. He put a group together for the performance, which included Fred Lipsius, the Grammy-winning arranger and alto saxophonist for Blood Sweat and Tears. Fred had this to say about the composer: “John has written some beautiful melodies. His music, thoughtful and soothing, comes from a place of love. It draws you back for another listen.” And I would certainly agree with Fred’s assessment. It is obvious to me that this music is the work of a composer with a rich background in a variety of genres. Elements of neo-classical, jazz, pop, and more reveal themselves in John’s lush elegant arrangements. Listeners who enjoy the solo piano artistry of Keith Jarrett, Liz Story, or Jim Brickman will find similar resonance in the music of John Paris.

On a track called “Soul Searchin’” the steady rhythm of John’s left hand ostinato symbolizes the Soul’s relentless quest for divine love, while also nicely balanced by moments of quiet reflection. John has a wonderful sense of dynamic and can explore diverse musical terrain within the borders of a single composition. Another good example of this talent is a piece entitled “Mist of Time.” In contrast to some of the mellower music that preceded it, this one takes off as an up-tempo jaunt that is punctuated by more introspective passages. I always find it interesting to hear about the imagery that a piece reflects to the composer. On this one, for John, the rhythm felt like the scene in Doctor Zhivago where they are on a sled racing across a snowy path. In fact, the original title was “Siberian Winter,” but was later changed to “Mist of Time.” Drawing from a completely different inspiration is a track called “Simple Ways,” that is John’s “ode to the 50’s.” With its’ 12/8 triplet feel, it echoes a sound often played behind 50’s rock and pop ballads. Another track that relates to a particular time period (and artist) is “Find The Way,” which was inspired by cool and unusual chord structures used by Stevie Wonder in his “Sunshine Of My Life” period in the early 70’s. While Stevie has received ultimate accolades for his danceable grooves and inspired lyrics, it takes an astute musician like John Paris to tune into these intricate chordal voicings, and emulate them while adding his own musical persona. Very impressive! 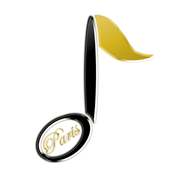 One thing you will find in the music of John Paris is diversity. Although it is all performed on solo piano, there is a tremendous stylistic range in his composition and playing. While some artists who attempt this multiplicity of motifs wind up with a mish mash of melodies, in John’s case it all works together, flowing effortlessly and harmoniously, and giving the impression of a body of work. I’m glad that he felt inspired to breathe new life into this music and upgrade its sound quality to the level that it deserves. I appreciate the piano artisty of John Paris – past, present, and future. I say  “future” because I’m looking forward to an album that John has hinted about which draws on his extensive jazz background. Good things are on the horizon for this talented musician. 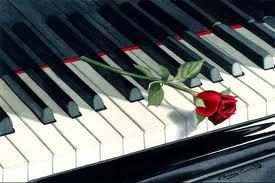