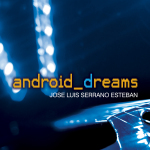 It’s hard to believe that it’s been over 3 years since I wrote about A New Horizon, the excellent previous release by Spanish recording artist Jose Luis Serrano Esteban. In that feature article, I covered much of his history and prior work in the music field, so those who are interested can find more at the above link. But just as a brief recap, Jose Luis’ background includes extensive experience in both music and sound engineering. He studied Telecommunications Engineering in Madrid and went on to working on installations of broadcasting equipment and PA systems, and even served as a sound technician for The Olympics. Now, in addition to being a recording artist, Jose Luis is also an accomplished studio engineer and has worked on many music and film soundtrack projects ranging from classical to new age, rock, electronic, and world music. For Jose Luis, the technical aspects of studio recording and mixing are as important on a creative level as composing and playing the music.

In our recent interview, Jose Luis shared a behind the scenes look at the origin and evolution of his latest release Android Dreams: “The album was born in 1996. That year I composed an electronic music suite called “Electronic Systems” which included seven parts, and seven different moods or ambiences. This music was created with electronic instruments but using classical music schemes I had in my mind. It was also inspired by the pioneers in electronic music and progressive rock music bands. This suite remained unreleased until 2014, when I decided to start working on the Android Dreams album, and appear as tracks 03 to 09. I took another three demos from 1997 and 1998 and wrote two completely new ones (Orbiting Saturn and Human Pulses). I started from scratch, rearranging all notes, instruments and sounds, bringing them to life with new high quality sound. This process took me more than a year in the recording studio, carefully crafting them.”

He goes on to speak about some of his inspirations on the project: “This album title is inspired by sci-fi movies, as 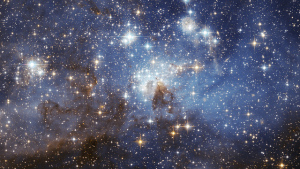 Bladerunner, which gave me with the idea of an android being able to ‘dream’ as humans do. Space movies such as 2001: A Space Odyssey, Star Trek, Star Wars, Elysium, Interstellar, and Avatar gave me inspiration for the titles of the tracks. The titles came out when the album was in an advanced stage, when I found the final order and understood that all of them formed a story, which started in “Walking to the stars” with lyrics written by Miguel Angel Prados. I found that the dream of the android was to travel towards the stars in search of human life.“

While Jose Luis’ previous album had some more earthy elements such as Spanish guitar and world music influences, the focus for this new release is decidedly extra-terrestrial – straight off the mother ship. However, you won’t find an ethereal Hearts Of Space-type recording on Android Dreams. Make no mistake – this album rocks. The recording is primarily instrumental and the sound reflects distant echoes of progressive rock (Yes, Genesis, Gentle Giant), space rock (Pink Floyd, Gong, Hawkwind), and electronic/ new age music (Jean Michel Jarre, Tangerine Dream). As Jose Luis said, the album first began in the mid to late 90’s, and has a classic sound reflective of that era, but with some contemporary touches. I’m sure that listeners who enjoy the sci-fi and rock influences mentioned above will find this sonic time capsule to be a treasure. I certainly do. 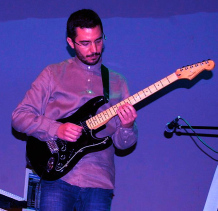 As mentioned above, it is mainly an instrumental album, although the opening track, “Walking To The Stars,” features vocals. Jose Luis’ soaring electric guitar takes flight over percolating sequences, trippy synthesizer, electronic effects, and powerful rock drumming. Right from the start the message is: fasten your seatbelt and prepare for lift-off. This is definitely not an album for meditation, yoga, or massage, but is a grand journey for those ready to take the trip. Along these lines, track 3, entitled “In the Launching Pad,” captures that feeling of getting ready to blast off with its atmospheric analog synths and pulsing sequencers, reminiscent of classic “Berlin-school” electronic music. On “Zero Gravity,” while the electric guitar lead commands your attention, listening with headphones, I was able to appreciate the intricately layered electronic soundscape that bubbled on the surface.

Interestingly, unlike a lot of sci-fi oriented rock and electronic music, whose tracks are often ponderously long, many of the songs here are in the 3-minute range, and sometimes less. This provides a nice sense of flow and a complete enough musical experience without it seeming like you should have packed a lunch before you started listening to the track. Clocking in at 2:51 is “Organic Matter,” whose galloping electronic sequence brought to mind Vangelis’ “Chariots of Fire.” By contrast is the slower tempo of “Frozen Moon,” which portrays an expansive vista of an ice-covered alien world. A very different image is painted in swirling musical dervish dance of “Stardust,” with its driving rhythm and exotic time signatures.

According to theory, its not possible to break free from the gravitational pull of a black hole, however Jose Luis takes 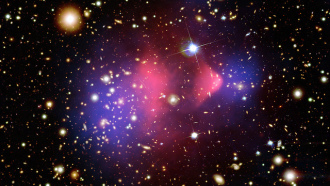 artistic license on “Escaping From The Black Hole,” and catapults us into open space with this uplifting piece that evolves through different movements, including a section in the center that borders on smooth jazz. The album comes in for a splash down with track 12, “Human Pulses,” which for the first 3 minutes provides the most ethereal dreamy new age section of music on the album, before moving into a more rhythmic phase.

I greatly enjoyed Android Dreams, and am very happy that Jose Luis has brought these tracks out of the archives to rework and update them so that they could be shared and appreciated. Since this music will probably be marketed in the new age genre, I will say that it may not be everybody’s cup of tea, given its progressive rock leanings. But listeners who do like this classic sound as well as sci-fi movie soundtracks will be thrilled with it. The synthesizers and electronics hearken back to an earlier analog era, which is now enjoying a major resurgence. There are numerous groups on Facebook and the internet devoted to this kind of music. It’s also interesting to see contemporary digital synthesizer designers and software developers going all out to recreate these vintage sounds on modern equipment. And as an electric guitarist myself, I particularly appreciated Jose Luis’ warm singing tone on lead guitar, which made me think he had listened to a bit of Carlos Santana along the way.

Jose Luis describes Android Dreams as: “a trip through a dreamy universe full of space ambiences, synthesizers, guitar solos, and progressive rhythms.” Going back to what I said in the beginning about the contrast between this album and his previous one, Jose Luis had this to say: “I love composing and producing music. I love different styles and I don’t want to give up any of them in my music language. I am an independent artist and I am free to produce with the simple idea of creating something beautiful.” I’m very glad to have had the opportunity to hear this album and write about it, and I’m sure it will find appeal with anyone who relates to the merging galaxies of progressive rock, electronic music, and science fiction.