“It is our very search for perfection outside ourselves that causes our suffering.” ~ The Buddha

These words of wisdom are part of the reason behind the title of Tom Carleno’s brand new solo album, Perfect Imperfection – but more on that later. Let me first say a few words of introduction about this talented artist. Hailing from my old stomping grounds of Denver, Colorado, Tom is an award-winning composer and musician who performs solo as well as with the acoustic jazz group Perpetual Motion, which has been performing and recording for over 20 years. Interestingly, Tom formed the group with violinist Josie Quick, who were at first band-mates and friends, and eventually husband and wife. In his quarter of a century career, Tom has played at numerous venues and festivals in the Rocky Mountain area, as well as being a session player on several projects, most notably with Danny Seraphine of the band Chicago. From 1982 to 1990, Tom studied with a stellar guitarist named Steve Mesple’ from the group Wind Machine, who broadened his horizons to include the fingerstyle guitar and alternate tunings which can be heard on Perfect Imperfection.

Although he has recorded numerous times with his group, this is Tom’s first release as a solo artist, and in the words of Crosby Stills and Nash: “It’s been a long time coming.” The process began in 2009, and took until 2013 to reach completion. With something in the works for that length of time, one could assume that it was due to the artist being a perfectionist. And that is where the title of the album comes in. According to Tom: “I used to think perfection was when you performed a task perfectly from start to finish and were left with absolutely no doubts about what you accomplished.  I did not think that I was a perfectionist. But then it occurred to me that maybe a perfectionist was a person who strives so hard for perfection that they think they never quite attain it no matter how close they might come. Nature is perfect only in it’s imperfection. That’s when I came up with the perfect title for my CD: Perfect Imperfection.”

“Have no fear of perfection – you’ll never reach it.” – Salvador Dali

From the opening notes of the first track, “In Search Of,” it is obvious that Tom is an accomplished guitar 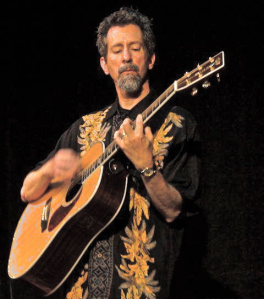 instrumentalist. His intricate fingering is precise, yet fluid as it moves from one passage to another. I couldn’t help but notice, not only in this composition, but characteristic of his playing in general, are the unusual chord changes and progressions he comes up with. I liked the occasional unpredictability of it and enjoyed not knowing where it might lead next. In fact, it sounds like Tom, himself, wasn’t sure where it was going while he was creating it. As he describes: “This song seemed to trying to find its own way as I was writing it. Many times I thought I knew where it was going only to find it had taken me somewhere else. I discovered that sometimes it’s best to just go along for the ride” – and a wonderful ride it is. While most of the 11 songs on the album are originals, Tom does offer his take on a few cover tunes. The first is an intriguing version of Al Stewart’s “On The Border.” The original arrangement is an epic composition with vocals and full orchestration, so I was interested to hear how Tom would play it on solo guitar. Actually, I think Tom wondered himself, when he said: “This song’s Spanish flavor inspired me to arrange it for guitar and it proved quite a challenge to combine all the instruments into one.“ But he did an admirable job, and I enjoyed hearing this familiar melody in a more elemental form. As I mentioned, Tom uses a lot of alternate tunings, and this is one of only two songs on the album that are in “standard” tuning.

And speaking of alternate tunings, a track called “Welcome To the Milky Way,” was actually written by Tom as an entry into a guitar magazine “alternate tunings contest” in 1998. While the acoustic guitar is somewhat of an earthy sounding instrument, Tom’s playing on this piece is out of this world. The second cover song, “Working Up An Appetite,” was originally by Tim Finn of the colorful and offbeat, 80’s new wave band from New Zealand called Split Enz. I’d heard of the band, but wasn’t familiar with this tune, like I was with “On The Border,” so I can’t compare it to the original. But I liked how it evoked a different aspect of Tom’s playing. This song features him using the body of the guitar as a percussion instrument in parts, tapping out a rhythm on its resonant hollow body. The fact that he was able to do this while simultaneously playing the guitar strings was impressive. I also liked the jazzy fretboard octaves that Tom incorporated in his arrangement. 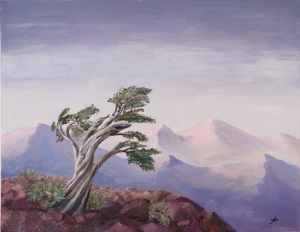 A song called “Timberline Tree” was one Tom composed for his mother, and was inspired by her painting of a tree twisted and gnarled by the wind at timberline, which graces the back cover of the CD. Both the tune and the painting are quite lovely. An upbeat folky tune called “Childs Play” also features Josie playing a catchy rhythmic accompaniment on the spoons. A light-hearted moment on video of them playing this live finds Josie not only playing the spoons with Tom, but also on him. The final cover song is one that I, and probably everyone on the planet, is familiar with – “Imagine” by John Lennon. Tom’s gentle and respectful version captures the peace and love vibration that marked much of Lennon’s writing. The last two compositions on the album, in a way, book-end Tom’s career, highlighting past and present.  “Brief Encounter,” written in 1985, was his debut fingerstyle composition and is about first love and first heartache. The album comes to rest with a new song called “What A Difference A Day Makes.” This is one of my favorite pieces on the album and has a meandering bucolic feel, like a Sunday drive on a country road – a sublime ending to this wonderful recording.

While I made mention previously of the painting on the back cover, the front cover also features an original painting. This one by TJ Reilly is an impressionistic portrait of Tom, appropriately called “Master At His Craft.” There is no doubt that Tom Carleno is a masterful fingerstyle guitarist. His songwriting is innovative and often intriguing, full of unexpected twists and turns. Perfect Imperfection is perfectly wonderful instrumental guitar music.