In a recording career that has spanned 14 years and includes 9 best selling albums and 2 Italian compilations, Ann Sweeten has managed to achieve a level of success that many musicians only dream of. In addition to her music consistently placing high on the charts, receiving extensive radio airplay, and winning numerous awards, she holds the prestigious title of an official “Steinway Artist/ Composer,” placing her in the company of some of the most distinguished pianists in the world.

Although currently known as a “composer/ concert pianist/ arranger/ producer,” Ann Sweeten’s past palette of artistic endeavors paints a larger, and even more multi-talented picture. As well as her achievements as a pianist, she has had a career as a professional actress, a singer in musical theater, a trained ballet dancer, and even fronted a rock band. Her formal education includes a degree in foreign languages from Smith College, as well as later studies in Paris and at the Boston Conservatory. In addition to the arts, she is an avid animal activist and environmentalist.

One of the ways she uses her music to help others is in the health care field – in particular, a program called HEAL, which stands for Health Education through Arts and Learning. In this program, artists give performances as well as visit patients in hospitals. The health care experiences of the artist are aligned with specific treatment programs in that community. As a breast cancer survivor herself, Ann is in a unique position to inspire others with similar health challenges.

Her latest release, “In The Wake,” is a showcase for the skills that have elevated Ann to such lofty musical heights. The album is co-produced by Windham Hill Records founder and Grammy award winning producer Will Ackerman, who also plays guitar on two tracks. Additional instrumentation includes flute, English horn, oboe, violin, viola, and cello, all of which are used sparingly to lightly season and subtly enhance the flavor of her rich piano compositions. Among her inspirations she lists Suzanne Ciani, one of my all-time favorite pianists, as well as composers Stephen Sondheim, Erik Satie, Tchaikovsky, and Debussy, reflecting her classical and new age influences. Ann’s music is both contemplative and emotionally evocative, providing a world-class listening experience. 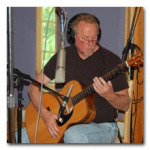 As I put on the CD to listen, the heartfelt warmth of the opening notes, inspired me to draw in a deep breath and settle back to luxuriate in the elegant music that was unfolding. Delicate acoustic guitar by Will Ackerman shadowed Ann’s playing with graceful understatement on the first song, Mid-way through, an airy flute soars above the rising and falling melody like a sea bird gliding just above the waves. On the solo piano composition, “Metamorphosis,” I appreciated the contrast between spaciousness and Ann’s tinkling harp-like glissandos that adorned the arrangement. On the wistful “Love Remembered” violin and viola add a poignant touch to the ambience. I especially enjoyed the title track after reading Ann’s explanation: “In the Wake” is best a metaphor for life… There are those who look ahead of the vessel… the captains, crew, or just those along for the ride, and those who glance behind, at the wake, perhaps a bit too often. I am such a person…” 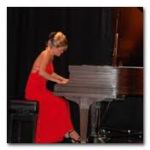 While the aforementioned song has a sense of “looking back”, it is followed by “On Wings Of Light” which has a feel of forward motion, and as the name implies, creates an uplifting air. As the album approaches its conclusion, “October Sky” provides a pensive portrait that reflects the more muted colors which signal the coming of winter. Viola accompaniment adds to the elegiac atmosphere of the composition. The last song on the recording, “Now, and Again,” makes a fitting finale as oboe and cello intertwine with Ann’s exquisite piano artistry in a piece that would make an enchanting film soundtrack.

Perhaps what best sums up Ann Sweeten as an artist and a person can be found in her own words: “It is often, people ask me where I get my inspiration. As for me, the pieces almost seem to write themselves. I think it must be then, that the source is divine, and while I play one instrument, I become, yet another.”