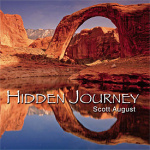 Although Scott August began his musical training early in life on piano and cello, his interest in world music was sparked at the age of 10 when he was given an African kalimba. However, his instrumental direction took a distinct turn nearly 20 years ago when he visited the Acoma Pueblo in New Mexico and was deeply enchanted by the sound of the Native American flute. Since that time he has embraced the haunting sounds of this unique instrument and it has become a major part of his musical identity. Among players of Native American flute music, such as Carlos Nakai and Coyote Oldman, Scott August ranks as one of the foremost in the world.  He has been nominated and has won numerous awards including the Native American Music Award.

In addition to being a leading authority on the instrument, he has been a headline performer at various music festivals, and has produced a number of CD’s, which have garnered airplay on the digital networks XM, Sirius and DirecTV, as well as nationally syndicated radio programs such as “Hearts Of Space” and “Echoes”. In fact, Echoes Radio host John Diliberto said of him: “”August has always been a cut or two above most native flute players. He layers guitars, keyboards and all kinds of percussion into his compositions, moving from world fusion to airy ambiences. August sets the Native flute in a vibrant global landscape…and let’s it drift into ambient space.” After being impressed by the visual nature of Scott’s early music, well-known composer Brian Eno suggested that Scott consider creating scores for film, TV, etc. Following that advice he has since composed music and sound design for hundreds of films, commercials, and video projects for clients such as NASA, The Discovery Channel, Lexus, Chevrolet, HBO, Nabisco, and Minolta. The LA Times has called Scott’s music “shimmering and luminous.” In addition to being a recording artist and performer, he has authored two books and a popular blog on Native style flute playing.

Scott is inspired by the natural beauty of the landscapes where he lives in Santa Fe, New Mexico, and his latest CD, Hidden Journey, has been described as: “an 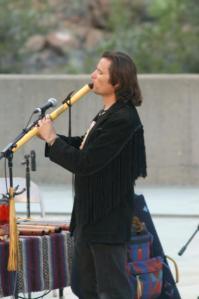 exciting and invigorating adventure into the secluded backcountry of the American Southwest. Evocative ancient flutes, powerful tribal drums, fiery Latin guitars, soothing pianos, and an assortment of exotic world-instruments will accompany you on your red rock adventure.” The journey begins, appropriately, with a song entitled “Awakening.” A solo Anasazi style flute gives the impression of echoing off canyon walls later to be joined by subtle swells of synthesizer and earthy percussive textures painting a picture in sound of a new day dawning. The pace picks up on the next song, “Sonoran Sojourn” as a variety of hand drums provide a rhythmic foundation for acoustic guitar and Cedar flute to dance on. I particularly enjoyed the interplay of various world music influences such as the kalimba, Indonesian Gamelan, sitar, and Indian tabla drums, along with keyboards and guitar on “Summer Horizons,” one of the few songs on the album without flute.

More international flavors abound on “Turquoise Trail,” which features the oud, a pear shaped stringed instrument and the darbuka drum both of which are commonly associated with Arabic music, and create an exotic alchemy when blended with flute, guitar, piano, and synths. While Scott’s flute playing is generally in the Native American style, it is his utilization of all these various instruments and rhythms that sets him apart from many other Native flute players, who are often more minimalist and traditional in their music. Another interesting feature of the album is the inclusion of captions under each song in the liner notes that describe the visions to be seen on this backcountry journey. 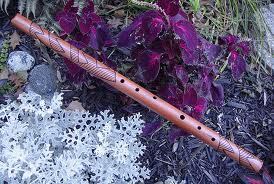 It was impossible to keep my head from nodding and my foot from tapping on the lively upbeat “Red Rock Crossing.” One thing I appreciate about Scott’s music is that it can be both relaxing and energizing at the same time – a rare quality. At eight minutes in length, “Waiting For Rain” is the longest track on the album and is an epic portrayal of “watching with anticipation for the summer monsoons to drift up from the south, bringing their precious moisture,” as described in the song’s caption. Accompanied only by the sound of crickets, Scott’s Cedar flute brings the album and the journey to a peaceful conclusion on “(Going) Home. By this point, you really feel like you have travelled diverse sonic terrain and seen many visions in your mind’s eye, as inspired by the music. Having reviewed and thoroughly enjoyed a previous album by Scott August I was looking forward to what this next release would be, and I am certainly not disappointed. In fact, Scott has expanded his musical palate on Hidden Journey and taken his sound to another level. The airy ambience of the flute and electronic textures, along with the various drums and ancient world instruments create a perfect fusion of earth and sky. Hidden Journey captures the spirit of the Southwest and extends it into a broader musical context, making for an expansive and uplifting musical experience. Highly recommended! 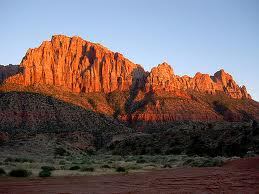