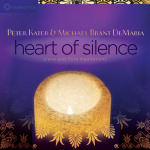 I was excited to first hear about and then to receive a new album on the Sounds True label that features two of my favorite recording artists, Peter Kater and Michael Brant DeMaria. Although I’ve written numerous times about each of them separately, this new release, Heart Of Silence, showcases their first collaborative effort. As the album’s subtitle, “Piano and Flute Meditations” indicates, the music blends Peter’s elevating piano with the soothing sounds of Michael on a variety of Native American flutes. As they describe it: “These sound poems and tone prayers are offerings to you and the Universe. They are soulful improvisations created by virtue of deep listening and infused with love and blessings.”

Before delving into the music, I’d like to provide just a brief introduction to this talented duo. 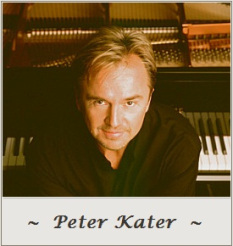 Peter Kater is a multi-platinum-selling pianist/ composer, and ten-time GRAMMY award nominee. Over the past three decades, he’s released more than 60 critically acclaimed recordings and has scored the music for over 100 television and film productions including 11 On & Off-Broadway dramatic plays. From solo piano and contemporary jazz ensembles to full orchestral works his music has been heard all over the world including prestigious venues such as The Kennedy Center, Carnegie Hall, and The Olympics. Peter is known for his many groundbreaking collaborations with a wide variety of musicians as well as numerous solo recordings. Albums of Peter’s music that I have written about here on Music and Media Focus include: Ritual (with R.Carlos Nakai), Illumination, Heart of the Universe (with Snatam Kaur), and my personal favorite, Light Body. Peter was recently chosen to receive the prestigious 2014 ZMR Lifetime Achievement Award. 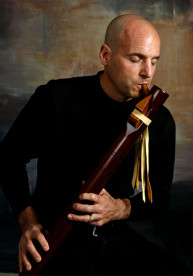 Multi-instrumentalist Michael Brant DeMaria is a four-time GRAMMY nominee, and seven-time ZMR Award winner. While he has played piano, synthesizer, and percussion for many years, the experience of hearing Native American flute for the first time on a Blackfoot reservation in 1993 was a life-changing experience, and has become part of his musical and spiritual path since then Among his albums that I have featured on Music and Media Focus are: Gaia, In The Flow, The Maiden of Stonehenge, and Bindu, my fav of Michael’s albums. This current release with Peter Kater is Michael’s third album on the Sounds True label, and his music was selected for Eckhart Tolle’s Music For Inner Stillness album. In addition, Michael holds a Ph.D in psychology and works as an integrative psychologist, author, and artist.

There is an interesting story behind the motivation for this music as well as some of the instruments that were created to express it. It all began when Michael’s was with his mother in the hospital as she clung to life by a thread. He was there when she went into cardiac arrest and he held her in his arms as he waited for the emergency medical team. Luckily they were able to perform surgery and revive her, but those moments had a profound effect on Michael’s consciousness. In his words: “I felt both a deep grief, but also a sense of connection and love.  I felt a heaviness and everything was as if in slow motion, kind of like a silent sound of grief. But I literally sensed and felt a deep glow of love and an awareness of our deep connection as I awaited for her to decide whether or not to come back. I came back with a deeper appreciation and awareness of how our love would never die and our connection like starlight would go on forever.  I literally saw a light with my eyes closed. It was like seeing into her essence, a crystalline golden light, while also hearing a deep low bass ommmmm-like sound.”

He goes on to share: “I wanted to capture that feeling and sound. It touched me so deeply… 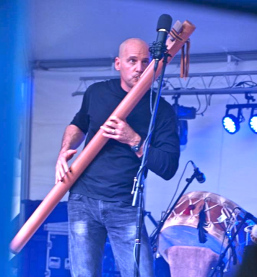 ominous and comforting at the same time. I had three custom made deep contrabass flutes crafted to try to emulate this sound, and sought out the lowest deep bass flute I could find  – a sub-bass A minor flute. It is 5 feet in length and there is only one other like it in existence.   These flutes became an expression, like a didgeridoo or a Tibetan horn to be a voice from the depths, the place we often avoid; deep feeling, grief, and at the same time an opening between the worlds. When I play these flutes my whole body vibrates, much like a cello does. It was the closest thing to expressing that place I found myself in… signaling across space and time the deep love we have shared on our earth walk together.” Peter, who lost his mother at an early age, felt a resonance with Michael and this project, and a series of recording sessions ensued.

In describing the recording and creative process, Michael shares: “Each track was a total free improvisation. No rehearsals – no preplanning. We just decided on what key to play in and started recording. We both have a similar process of allowing the music to emerge out of silence – letting go of the logical strategic mind, and allowing the spirit of the moment to guide us. It’s important to realize these were meditative sessions for us, and meant to be meditations to listen to. Both Peter and I have a strong daily meditation practice going back decades, and this was the deep spirit that informed the space we created for this music to emerge. As a result, from the beginning we knew this was going to be a very Zen album, with lots of space, Our approach was deeply minimalist, spending a lot of time in deep listening for the music to emerge.”

This description certainly proved to be accurate as the album opened with the title track. It is indeed quite spacious and meditative and took on a particular significance for me as I listened and reflected on the gossamer veils that separate life and death. Throughout the album I appreciated the improvisational nature of the recording and an image came to mind of these two musicians as sonic surfers, waiting to catch the next wave of inspiration and riding it into shore, which they did on each of these heartfelt musical meditations. The next track, “Radiant Dawn,” has more motion, driven by Peter’s rolling arpeggios that flow like a river with Michael’s higher pitched Native flute soaring above it. As Michael mentioned, the sound of the low bass flutes sometimes have a similar role and effect as a drone instrument like a didjeridoo, as it does on the gentle and expansive “First Breath.” Peter’s piano playing here is absolutely gorgeous and I marveled at his ability to improvise such evocative melodies in the moment. Tracks such as “Tender Heart” and “ Timeless Echoes provide other excellent examples of this as well. 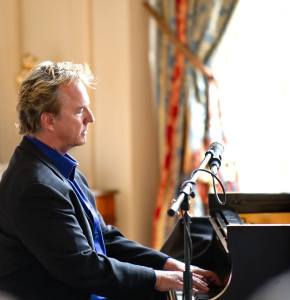 There are a number of interesting role reversals from song to song as the album evolves. At times, the drone of Michael’s bass flute creates a foundation for Peter to improvise over. While on some tracks, Peter’s more sparse playing, as on “Midnight Dreaming,” holds down the fort, so to speak, as Michael weaves an enchanting spell on Native flute. It’s a lovely slow-moving piece reflecting a deep peaceful reverie. Interestingly, from the dream state of the previous piece, the album moves to “Awakening,” which is the final track.  I especially enjoyed Peter’s beautiful cascading waterfall of notes on the piano that provided the song’s flow. Michael created some intriguing percussive sounds on the flute as well as his more melodic solos. All of this makes for a perfect ending to this exquisite collection of serene journeys.

While I have lent considerable focus here to the inspiration behind this recording project, I feel that knowing about it adds another dimension to the experience. As mentioned, the separation between this world and the next is thinly veiled, and I appreciate Michael and Peter’s intention to musically explore this diaphanous realm. But even without knowing the back-story, Heart Of Silence is perfect for meditation, relaxation, yoga, healing work, and more. The creative chemistry between Peter Kater and Michael Brant DeMaria is magical. They are both superb musicians in their own right, but what they have created together is as unique as it is transcendent. Heart Of Silence provides a dream-like voyage between the worlds that I’m sure many listeners will enjoy taking again and again.