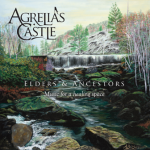 If I had to choose one word to describe the music on Elders & Ancestors, it would be “enchanting.” It’s diaphanous tones and textures, along with strings, subtle percussion, and sounds of nature create a magical soundscape for ethereal vocals and earthy Native American flute to drift dreamily over. Agrelia’s Castle is the musical identity of husband and wife team Paul and April Brown. According to them, this offering to the world is their way to give back to all of the wonderful teachers they have met along their journey, many of whom are no longer with us, who have shown them how to live, under difficult circumstances, with beauty and grace. This music is dedicated to all of them. These words serve as a preface to the inspiring story behind this album.

“Brother Paul” Brown is a GRAMMY nominated producer and keyboardist for the well-known Celtic folk/rock band from the UK called The Waterboys that began in 1983. Although Paul has been involved with the music world for quite some time, April was drawn into it much more recently, in a roundabout way, as a result of circumstances beyond her control. While that may sound mysterious, it is an essential part of the story behind this music.

As April tells it: “Our story started in June of 2017, when Paul and I met. Not two months later, I found out I had breast cancer. So, our story has always been entwined with my cancer journey. I feel like God – or the universe, or whatever appellation you might give to what I have come to understand as the collective consciousness of everything – brought Paul into my life just when I was going to need him the most.” In 2018, April’s breast cancer had returned and spread 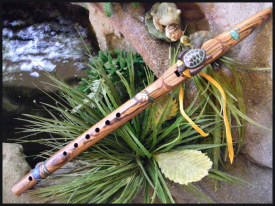 extensively through her body, beginning a long and difficult road of intense challenges. One time, while on a healing retreat, April participated in a drum circle and she became entranced by the sound of the Native American-style flute, which she found to be a soothing and magical instrument. She goes on to say, “Paul gave me my first flute for my birthday that year and it felt as if I was being united with an old friend. I felt so much peace and joy when I played.” According to Paul, “It was as if she’d played this instrument all her life. Her articulation, her vibrato and her choice of the very notes themselves all just completely blew me away!”

Paul and April’s first musical collaboration was on a guided meditation recording, on which Paul insisted that April be involved on every level as a participant rather than a spectator, much to her reluctance. As he shares: “Not long at all or perhaps even right as we were nearing the finishing line of the guided meditation album I knew in my soul that we had to keep somehow keep this going.” As Paul recollects after recording their first track of original music they created together: “When we finally played the last note and looked at each other I swear it felt like we had just made the most amazing, intimate passionate love without as much as a single physical touch. Then we went back and listened to the track in the control room and as this 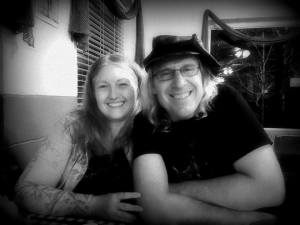 track was playing I felt this overwhelming mountain of joy welling up! Like we’d just hit the relationship lottery! That for me is truly what every track on this album represents. Every track has been a healing, growing challenging experience, and a new and beautiful means of self-discovery on both a musical and personal level.”

While creating the album was a joy and an accomplishment it was also a huge challenge. As April shared with me in an interview: “The album overall has taken us over three years to complete. We worked together between Paul’s other projects and gigs, and when I was feeling well enough to spend time in the studio. There was a period of time when a medication I was taking affected my voice – I had difficulty speaking much of the time and couldn’t sing at all. So between the two of us, just finding time to work on the album could be challenging. But it was also the best time we ever spent together. It was our quality time together. In creating music together, I think we were also creating a new paradigm for our relationship. Our old roles in the relationship had changed dramatically after my metastatic cancer diagnosis. This was a healing experience for us, a growing experience, as a couple.” On Ancestors & Elders, Paul and April share their music, inspiration, and healing energy to all those going through challenges of any kind. It also provides an oasis of calm for anyone seeking a relaxing listening experience. 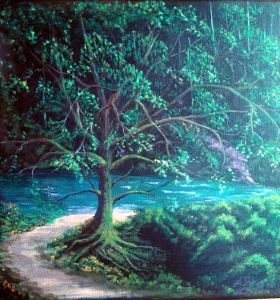 This is actually an abbreviated telling of the couple’s story and what went into the making of this album. But it’s enough to give the reader an idea and a greater appreciation of the music we will now be discussing. The album begins with the title track, and true to its name, Elders & Ancestors, there is an ancient feel to it that is both earthy and ethereal at the same time. Dreamy synthesizers, nature sounds, percussive textures, Paul’s echoed keyboard notes, and April’s Native flute and wordless vocals create an archetypal new age music ambience that immediately draws the listener into their sonic landscape. That serene vibe flows into the next track, entitled “Adrift.” I love the way it starts with the sound of water and the warm bell-like tones of Paul’s vintage Fender Rhodes electric piano. Throughout the album, Paul also plays organ and other keyboards, as well as drums and percussion. April’s angelic vocals float over the aqueous soundscape with subtle percussion adding a bit of earth element.

On track 3, “Breathe,” Tom Shinness, who plays guitar, harp guitar, cello, and bass, joins the duo. And adding a bit of world music influence is Richard Cushing on the sitar. And speaking of world influences, after the piece begins with the sound of wind and tinkling chimes, the first instrument heard is a kalimba, or African thumb piano creating a nice little groove that the other instruments begin to layer over. In addition to April’s previously mentioned wordless vocals, on this song she sings lyrics as well. “Breathe” is an extended track that unfolds gradually over nearly twelve and a half minutes. When the sitar comes in over a lively beat after about 4 minutes, it provides a nice change up and an exotic flair. 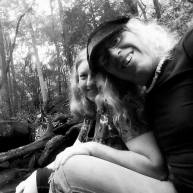 After this rhythmic romp, the music migrates back to a more meditative mood on the appropriately named “Spirit Dreaming,” as well as into the following piece entitled “Sonnet” with its lovely cello accents. On track 6, “Wayfaring Stranger,” a new accompanist, Mike Farris, handles the lead vocal part in a soulful style that tells an inspiring story. The album ends as it began with just Paul and April. Opening with the sound of the ocean and a spacious piano intro by Paul on “Agrelia’s Lullaby,” April’s layered wordless vocals create a heavenly choir that brings the album to a lofty conclusion.

This gorgeous gift that Paul and April have given us in the form of Elders & Ancestors is imbued with healing, hope, and above all, love. The energy they have put into this creation illuminates each beautiful composition. While I was both moved and elevated by the music itself, knowing the story behind it made the listening experience that much more inspiring. Having said that, I will leave the final thoughts to April to conclude this feature article. In her words: “The songs on this CD are very meaningful to me. They have grown from our journey through the cancer landscape. They come from a desire to create peace, joy, and hope in our lives. When I listen to our music, I feel soothed and uplifted. It is my hope that other people, people living with chronic illness or those in caregiver positions, will experience the same soothing, uplifting feelings when they listen to our music.” 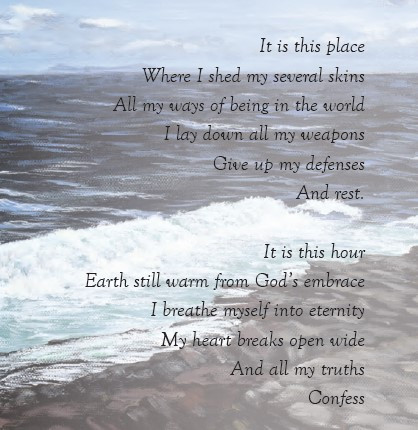