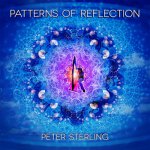 If there is any instrument that has an instantly uplifting effect and the ability to evoke a celestial vibe, it is the harp. Perhaps it is the association with the angelic realm, but there is something about its’ ethereal ambience that speaks to the soul. For harpist Peter Sterling, it is a perfect vehicle to express his artistic and spiritual vision. In his words, “the harp has a unique ability to reflect in sound the harmonic structure of the cosmos.” This is represented visually as well in the album’s artwork with its sacred geometry images and visionary art graphics. Although Peter played a bit of piano and guitar earlier in life, the harp is something that came to him in later years, after he felt a calling to pursue it. Without much formal training, he took to it intuitively and quickly developed into an accomplished recording artist with a number of award-nominated CD’s to his credit. Another of his albums I’ve had the pleasure of reviewing is Circles Of Light which was actually recorded on location in the English countryside within a crop circle.

The music on his latest release, Patterns Of Reflection, originated as a series of flowing solo harp improvisations which he later added accompaniment to, both his own and from guest musicians. While the initial music came through in one session, he spent many months on the project. Peter shares: “Like a painter in sound I worked for one year adding the other instruments and layers to bring to life this ever unfolding sonic sculpture.”

Fans of new age harp music will undoubtedly recognize the name of Swiss harpist Andreas Vollenweider. While there are some similarities with Peter’s music, without implying too much of a comparison, I will say there’s a good chance that people who like Andreas will certainly enjoy Peter Sterling as well. In addition to the electric harp Peter also contributes keyboards, native flute and vocals. Besides new age music influences, traces of jazz, classical, and world music find their way into the mix. It was interesting to read the liner notes and see the names of some old favorite musicians that I hadn’t heard in a while, including guitarist/ recording artist Bruce Becvar and William Aura on bass and production assistance. William is a highly respected producer and musician in his own right, both on his solo albums and with the group 3rd Force. Additional accompaniment is provided by Richard Hardy on silver flute, soprano sax, penny whistle, clarinet, and bass clarinet, Dov on violin, airy Enya-like vocals by Ani Williams and Crystal Bliss, and Michael Reidinger on tabla drums. 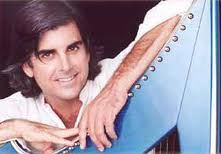 While the harp, as mentioned, can certainly conjure otherworldly realms, it is featured in a more earthy context on the opening song, “Terra Nova.” Softly plucked harp strings, chirping birds, and gentle keyboard textures create an enchanting intro before a richly reverberant gong signals the beginning of the main melody. “Onward And Upward” features both Bruce Becvar and William Aura, as well as the bass clarinet of Richard Hardy providing an almost cello-like timbre, along with subtle female vocals, tubular bells, and more. One thing that stands out to me on this song as well as throughout the album is the way there can be a lot going on with intricate interweaving of instruments, yet they are so masterfully blended as to allow the music to still feel spacious.

With 16 songs on the album, there is not room to go into detail on each one, but a glimpse of some of the highlights is in order. As might be expected with a title like “Child Of Light,” the ambience is sweet and delicate with a gossamer-like sheen that is best described as heavenly. Listening with eyes closed to “The Emerald Forest” it is easy to envision fairies frolicking in a misty moss-covered glen as rich orchestration, strings, flute, bells, and percussion set the scene. A more exotic Eastern ambience emerges on “Tantra Of Love” which grooves to the rhythm of Indian tabla drums and tamboura-like drone while harp and piano dance blissfully in the soundscape. A bit of jazz influence is heard on “Modern Times” with the harp laying down a bouncy background for a soprano sax to soar over, with synths and choir sounds adding an atmospheric element. Perhaps the most adventurous piece, and one that invites the Andreas Vollenweider comparison, is “The Grail Quest.” With different movements around a central harp figure and tasteful percussion, true to the title, the song captures a feel of boldly journeying forth on a magical mission

I’m quite impressed, not only with the initial harp improvisations that Peter created, but also with how much he has put into them after the fact, to embellish and enhance their beauty. I have to emphasize again how exquisite is the alchemy of instrumental interaction on this CD – an interesting integration of improvisation and orchestration. Patterns Of Reflection provides a rich listening experience that is both relaxing and revitalizing. 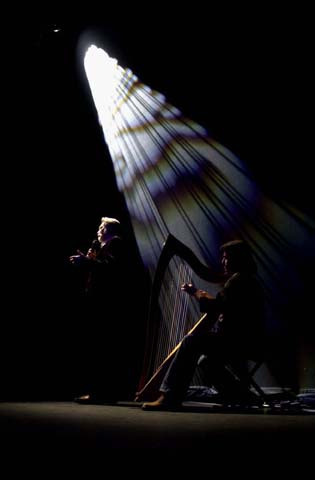