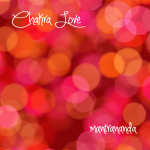 Chakra Love is the debut CD from a Los Angeles-based duo of Vicki Howie and Jeff Bonilla who record under the name Mantrananda. The word means “the bliss of spiritual sayings (mantras).” Incidentally, for those who may not be familiar, chakras are the energy centers of the body as described in Eastern spiritual teachings. The project began with Vicki, who is a master hypnotherapist, life coach and advanced yoga instructor. According to the album’s liner notes: “While teaching yoga in 2005, Vicki started singing accapella mantras during the final resting portion of her classes. She didn’t consider herself a “singer” at the time, but simply felt compelled to share the healing energy of the mantras she had learned from world-renown devotional singer, Deva Premal. As her students began asking her if she had a CD they could buy, Vicki gradually got used to the idea of creating one. She knew she needed to find the right musical partner who could bring instrumentals, inspiration and creative collaboration.” The project had a long germination period and seven years later she met singer/songwriter Jeff Bonilla who helped her bring it to fruition. Jeff is a former police officer, with over 20 years of experience in a wide variety of musical styles. But what made him the perfect person for this project was the fact that he had previously written and directed a film called “Chakra Love”, which he won a Best Director award for. They chose to use that name for their album in homage to the film. I found it particularly interesting that Vicki sees the chakras as gender-based pulsations – 3 female, 3 masculine, and one unity, so for that reason, she especially wanted a male collaborator for the project. 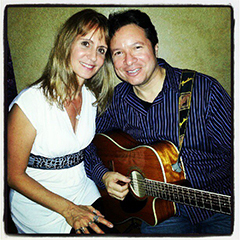 meeting, they wrote the first song literally within minutes. They felt their muse was with them and that the music seemed to flow through them of its own accord. Over time, they got together regularly and composed a song for each chakra. Vicki’s vision was that each song would remain true to the energy of the chakra, which was an idea that appealed to Jeff. In his words: “There are a lot of chakra albums out there but what I found was that for the most part, most of the chakra music sounds very ethereal and indistinguishable. So that was the challenge. On our CD we use the seed sound of each chakra and captured the essence/element in the music and lyrics. So 3rd Chakra “Manipura” whose element is fire, sounds fiery and upbeat and not ethereal like the 6th Chakra “Ajna,” which is an upper chakra and should sound ethereal.” Rather than use the same style of music on each track, they varied it considerably, incorporating elements of acoustic, pop, and electronica along with vocals by both Vicki and Jeff in Sanskrit and English. This blend creates a melodious melding of ancient and modern.

As the album opens on the first chakra, we are greeted with the sounds of nature – crickets, rain, and thunder, establishing an appropriately earthy ambience. Soon after, a funky beat lays down a groove that is overlaid with Jeff’s shimmering electric guitar and synthesizer background. At this point, it occurred to me that this song could have been called “Chakra Rock,” for its foot-tapping, head-nodding sound that draws you in right from the start. It is definitely a departure from the more meditative chakra music commonly heard. But it is true to their purpose of having the music match the energy of each chakra. With the stage set, Vicki makes her entrance chanting the name of the chakra and Sanskrit mantras. Midway through, the music drops down in volume and Vicki does a beautiful spoken word segment honoring Mother Earth, before the groove and chanting resume. Later in the piece, Jeff joins in on synthesizer and vocals processed through electronic effects adding a bit of psychedelic atmosphere to the track – very cool. While some mantra-based music can, by nature, be fairly repetitive, the skillful arrangement of this composition kept it interesting and diverse, while maintaining the needed sense of continuity for meditative purposes.

On the second chakra, the earthy beat-driven vibe of the first track, gives way to a more watery guitar and syntheszier soundscape, with Vicki chanting in English about letting the river flow and letting your self go. In places, her vocals were multi-tracked, giving an Enya-like choir effect. The third chakra, which is related to the solar plexus and the fire element, definitely brings the heat on a highly danceable track with an 80’s rock vibe complete with lead guitar solo, and Vicki entreating us to “feel the fire in your soul…” There was a touch of Auto Tune used as an effect on her vocals to give that contemporary sound that is so in vogue these days. Again, like the first piece, there is a nice breakdown in the middle where the beat drops out for a bit leading into a more spacious section before rocking out again. 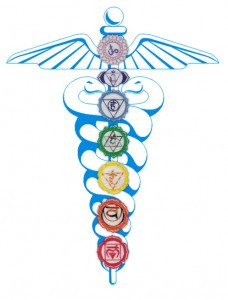 As to be expected, a very different energy pervades the fourth track, related to the heart center. In an interesting choice of musical background, this mid-tempo piece had an opening chord progression and overall sound that reminded me of the hit song “Every Breath You Take,” by The Police. However, it soon moves into a dreamy drifting space with Vicki chanting the Sanskrit name of this chakra – “Anahata.” In one section, Jeff steps out a bit more vocally singing a repeated phrase: “The heart is the bridge between body and soul.” This was a beautiful piece with another fine arrangement. Not to overdo comparisons to other music, but echoes of Pink Floyd reverberated on the trippy track 5, “Visuddha,” which, in certain sections, featured some of Vicki’s most soulful singing heard thus far. As mentioned earlier, the music evolves from earthy to ethereal as it progresses through the chakras, and by the time we get to “Ajna,” the 3rd eye center, it is quite airy, and is enhanced by very creative use of reverb and electronic effects to help achieve that ambience. That said, the 7th or crown chakra was a bit more up-tempo than I would have expected, although the lyrics fit perfectly with the thematic meaning of this chakra. In addition to the seven chakras are three additional tracks: “Abundance Song,” “The Healing Song,” and an ancient mantra “Loka Samasta Sukhino Bhavantu,” which translates in short to: “May all being be happy,” and is a prayer for the people of the earth, in comparison to the first track which is a prayer for Mother Earth herself.” I thought this was a nice touch to bookend the album with these two pieces.

There are a number of chakra-related albums that have been released over the past few decades and Chakra Love is certainly a unique entry into this highly specialized niche. While the concept springs from Eastern spiritual teachings that have come down through the ages and have been interpreted musically in a variety of ways, I don’t think I’ve heard it done as a vocal album with such a strong instrumental background that incorporates as many contemporary musical styles. To be honest, I didn’t expect as much rock and pop influence, although I really enjoyed it. With the current popularization of kirtan and devotional music mixed with electronica, there is certainly a growing market for an album like Chakra Love. The recording is well produced by Jeff and the energetic balance between he and Vicki is perfect – like yin and yang. Also, as a guitarist myself, I was constantly aware of Jeff’s playing, and in particular the exquisite rich chorus-laden tones he gets – nice synthesizer textures and electronic effects too. The thing that stood out most to me about Vicki is the purity of her voice and her soul, which shines through the mix, and the absolutely clear intention to charge these songs with spiritual energy for healing and upliftment. I also give her a lot of credit for having the vision for this project and not giving up until she found the exact right person to collaborate with to make it a reality even though it took many years. Chakra Love is a thoroughly modern and highly accessible take on ancient spirituality that is sure to be warmly welcomed by a growing number new age music lovers.