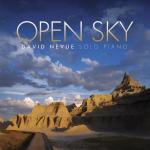 For a pianist, having your music compared to the likes of George Winston, David Lanz, or Jim Brickman, can be a lot to live up to. For David Nevue, however, that accolade is not without merit. I’ve known of his music for years and have had the pleasure of writing about A Delicate Joy, which was the release before Open Sky. That article contains information about his background, influences, and more so I’ll refer readers there to read about that. I also wrote another article about his fantastic resource book: How to Promote Your Music Successfully on the Internet, which has been one of the most viewed pages on my website since then. No less than The Wall Street Journal, in July of 2006, named David a “media mogul” including him on a list of producers “being catapulted into a position of enormous influence.” Since 1991, David has released 14 albums including his earlier release, Overcome, which was named the “Best Instrumental Piano Album of 2005” by the prestigious Lifestyle Music Awards, and his 2008 recording, Adoration, that reached the number 1 spot on the Zone Music Reporter charts for radio airplay. And speaking of radio, in 2003, David launched Whisperings: Solo Piano Radio, a free 24-hour internet radio program that is enjoyed by nearly a million listeners a month.

Now, in 2013, David has recently released his Open Sky album, which he sees as one of his most diverse yet, including thirteen original compositions plus arrangements of “Scarborough Fair,” “The Water is Wide,” “For the Beauty of the Earth” and “Morning Has Broken.” The first song on the album is the title track, which David sees as “a musical expression of freedom, exploration, and the exhilaration that comes from seeing and experiencing new things. It’s the perfect music for the open road…” There is a wonderful sense of lightheartedness and openness that drew me right in from the start. I liked the way David’s left hand anchored the song with a repeating pattern while the right hand deftly explored the melodic terrain. This was an excellent choice for an opening track. David is quick to point out that this is one of his most diverse albums ever and that a lot of different musical ground is covered. With 17 songs on the CD, totaling over an hour in length, there is a bit too much of that ground to cover each track in detail. But the music has numerous highlights and left me with many impressions and feelings, which I’ll be glad to share. 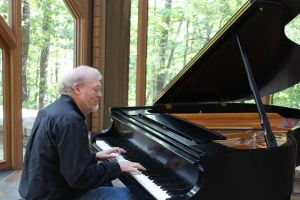 I loved the lightness and luminosity of a song called “The Sound of Sunshine,” which David refers to as “a celebration of those “wide awake moments” when you feel truly alive, almost as if you were somehow standing a little closer to heaven.” Its not surprising that there is an air of spirituality that comes through in David’s music, being the person of deep and abiding faith that he is. But it is a feeling that is implied or sensed in what the music evokes within you, rather than anything direct or overt. While David sometimes reveals his abilities with brilliant and intricate compositions, his talent is also reflected in songs like “Butterfly Dance,” whose brilliance lies in its simplicity and understatement. I also appreciate the way he is able to compose a song around a theme and so beautifully capture it in his expression. One of these is a track called “Forgotten Places.” The inspiration for this came when David and his family visited a ghost town in Eastern Oregon. As he describes it: “There’s something quite sobering about visiting places that have faded away into history. As you walk among the empty, broken buildings, you can almost feel the weight of time.” That ephemeral feeling is perfectly portrayed in this wistful composition, and you almost feel like you are there, walking those silent empty streets where only shadows and memories remain.

As I listened to the songs on the album in sequence, I found myself looking forward to getting to track 8, David’s version of the Simon and Garfunkel classic, “Scarborough Fair.” This enduring melody is rendered here with heart and soul which I found quite moving and thoroughly enjoyed. Another track, which I liked very much, was “Distant Thunder.” What stood out to me about this one was the way that David emphasized the space between the notes and phrases, as much as the notes themselves, evoking the distance referenced in the song’s title. On the other end of the spectrum is a song called “Twister,” which David calls “swirling and intense… a real challenge to perform.” This song follows “Distant Thunder,” and provides an interesting yin yang contrast, once again revealing David’s mastery over a diverse range of material.

Another “cover” tune is “The Water is Wide,” an English folk melody that dates back to the 1600’s, but which has 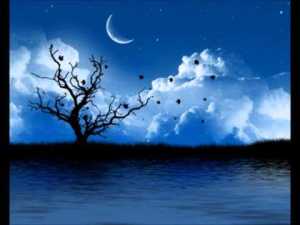 seen considerable popularity through to the present day. David refers to this one as “haunting, dreamy, and pensive,” and I would agree with his depiction. A track that further fits this description is “Dark Afternoon,” which David composed years ago as part of a musical passion play to represent Jesus’ dark afternoon on the cross. The album draws to a conclusion with the final cover song, “Morning Has Broken.” Being a child of the 60’s, I naturally assumed that Cat Stevens was the composer of this tune, which he became identified with. However, after a bit of research, I found that it is actually a popular Christian hymn that was first published in 1931. David delivers a lovely performance of it here, which he arranged once to play at a wedding.

Although he has released 14 albums, this one seems to hold a special significance for David. I was intrigued to hear him say: “This project has been a long, long labor of love…. and that is an understatement. I don’t know that I have ever worked so hard on a project… or for so long. That said… if this is the last music I release to the world… then I’ll be OK with that. This album really feels like a capstone – like the final icing on a David Nevue cake. I don’t know that I can ever outdo this.” That is quite a declaration from a celebrated artist who has released so many highly acclaimed albums! However, along with his numerous fans around the world, I certainly hope that this won’t be his last. But I have feeling that we will hear more from this talented pianist and composer, that that he will find a way to dig deep creatively and somehow “outdo” all the effort he put into this one. I know I’ll be looking forward to that. But for now, I’m more than content to enjoy the magnificent musical artistry that is Open Sky. In the expanding galaxy of solo piano artists, the combination of technique, feeling, and vision that David Nevue brings to his music illuminates him as one of the shining stars of the genre.