Having recently had the opportunity to meet with Ricky Kej, I came away being extremely impressed with how much he has accomplished so far in his 32 years on the planet. Many people never get close to this level of achievement in an entire lifetime. He told me a fascinating story that perfectly illustrates the single pointed dedication he holds towards his music career. Ricky grew up in India in a family of doctors, who were not exactly thrilled about his wanting to devote his life to music. But they told him that if he went to college and got a professional degree they would be more supportive of his musical interests. So to honor his family’s wishes, Ricky undertook studies in dentistry and eventually graduated with a degree in dental surgery. Having fulfilled his promise, immediately after graduation, he went full steam ahead into his music career without ever practicing dentistry a day in his life. Ricky always knew that music was his life path and nothing would deter him from it.

It hasn’t been that long since Ricky graduated from college and began his artistic career in earnest. In just 13years, he has created Raveolution Studios, a high level professional recording facility in India that has produced over 3000 jingles and commercial placements for clients like Toyota, IBM, Nike, Ford, Levi’s, Air India, and many more. One of his fondest accolades is having composed the music for the opening ceremony of the ICC Cricket World Cup in 2011. This opening ceremony was telecast in over 200 countries worldwide. It was hailed by the  world media as the best Opening Ceremony in the history of World Cup Cricket. He has also recorded numerous albums, composed the entire score and songs for five feature films in India, appeared as a guest judge on many singing reality shows in India, and is an activist for music education and animal rights. Actually, the list goes on, but there is only so much room in the scope of this article and I do want to focus on his personal music and Shanti Orchestraalbum. 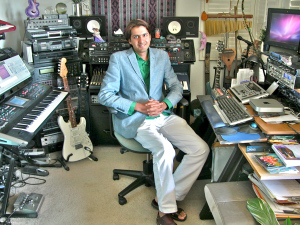 According to Ricky. The word “shanti” means “peace” and “equilibrium.” In his words: “I believe just like music can be harmonious amidst so much of chaos, so can the world. Music works best when there is harmony and not when notes are in unison. It is similar with the world. We do not actually need the world to live as ONE in unison. We just need the world to work as a harmony. We do not need absolute unity, but just a state of NO war, where every country lives harmoniously, sharing and in understanding of each other. Shanti conveys just that.” Ricky doesn’t just speak in platitudes, but his music is a living example of international cooperation and harmony. On this album he has collaborated with over 20 musicians from around the world, including sitar maestro Paul Livingstone (USA), flute virtuoso Wouter Kellerman (South Africa), bansuri flutist Praveen Godkhindi (India), vocalists Junior Bay (Congo) and Alexis D’Souza (Qatar), among others.

Magic is in the air as the album opens with Shanti, Pt.1. Swirling synthesizers and tinkling chimes set the stage 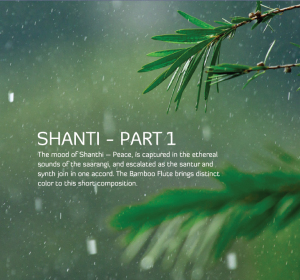 for the entrance of exotic instruments like saarangi, santur, tabla drums, and more. Airy flutes glide over earthy rhythms as the song evolves and alternates between driving beats and more a spacious sound. Although the track is short, at just over two minutes, it provides a perfect introduction and signals to the listener to fasten their seatbelts, put their tray tables and seatbacks in an upright position, and prepare for takeoff on an extraordinary musical journey. On the next track, entitled “Forever,” while the vibe is peaceful, the music itself can be quite intricate, as it is throughout the album. Listening as a producer, I can only imagine how many tracks it took to create some of these elaborate soundscapes. I’m sure that I could listen to this numerous times and keep hearing new sounds and subtle nuances emerging from the mix. In some ways it reminds me of Indian cuisine that combines a great many spices and flavors to create rich and complex taste experiences.

The music of Ricky Kej artfully integrates Indian and world music influences with the lush orchestration and aura of enchantment created by artists like David Arkenstone, Kitaro, 2002, and Al Conti. A track simply called, “Blue,” is a serene dreamscape that alternately floats, and grooves gently with contemporary electronica and down-tempo beats. I especially appreciated the way Ricky was able to weave the percussive elements in and out so seamlessly in this meditative excursion. Additionally, along these lines, was the skillful blending of traditional instruments with more ethereal synthesizer-based sounds. A good example of this is on “Pieces Of Heaven,” which also adds angelic female vocals. In the liner notes, Ricky refers to the combination of sitar and santur throughout the song as, “the perfect marriage between plucked and hammered strings.” As much as I’d like to write a detailed description of each and every track, space dictates selecting highlights – not an easy task on an album filled with them.

Although there are 20 musicians who collaborated on this recording, all the songs are composed, arranged, and produced by Ricky Kej. I commend him for having both the vision to conceive of this incredible music, first in his mind, and then to magnetize all the various elements to bring it to fruition. No small feat on a project of this scope. Shanti Orchestra is music making on a grand scale. One of my favorite aspects of the album is the tasteful use of innovative contemporary beats, samples, and sequences, which add both forward motion and 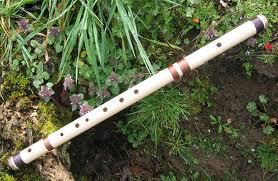 chilled out rhythms in so many interesting contexts. Also, listeners who appreciate the sound of wood and bamboo flutes will have a lot to enjoy as well, with the many songs that feature their atmospheric ambience. A track called  “Mellow,” with its haunting female vocals and 40-voice choir, exudes an Enya-esque cinematic air, which is not surprising, given Ricky’s involvement with film and soundtracks. One of the most intriguing, and unexpected combinations of musical elements is on the next to the last track, called “Thou.” This song features a vocal performance by Junior Bay, who is from the Congo, with lyrics sung in Latin, which brought to mind the music of the group Enigma. Although, with a background of Middle Eastern percussion, harp, flute, atmospheric keyboards, and drone instruments, this mystical mélange is quite unlike anything I’ve heard before.

I found the music of Shanti Orchestra to be very visually evocative to the mind’s eye. Listening with eyes closed conjures beautiful imagery and can whisk one away on a dream-like magic carpet ride to exotic inner vistas. This entrancing quality is one of the reasons I feel that the album could have tremendous mass appeal, in a way that a film like Avatar does. I also wanted to mention the exquisite artwork on this project, from the vibrant cover image to the 11-page full color booklet that accompanies the CD, with beautiful photography and notes about each track. There are also a number of music videos filmed by acclaimed film makers from Lebanon, Bali, and India, featuring songs from the album, which can be seen at Ricky’s website. To say that I am impressed with the music of Ricky Kej and Shanti Orchestra would be an understatement of the highest order. This is truly a magical listening experience that I can’t recommend highly enough