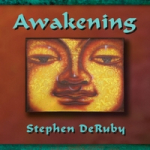 I would imagine that there are a relatively small percentage of musicians who actually make the instruments they play. Stephen DeRuby is one of them, with over 40 years experience as a musician and craftsman of beautiful high quality Native American-style flutes. Playing the flute however, was not his original musical direction. Starting out in the 1970’s as a folk singer, he was a career musician for many years until in 1980, an unexpected problem developed with his vocal cords, which put an end to his ability to sing professionally. But as the old saying goes: “when life gives you lemons – make lemonade.” I’m always inspired to hear people who turn obstacles into opportunities, and Stephen used this bump in the road to chart a new course with his music and his life.

This loss initiated a nine-year path of becoming a holistic health practitioner and teacher. While studying the healing modalities of indigenous peoples he began to focus on the Native American Flute, drums and rattles. However, this was not his first exposure. A seed had been planted back in the 70’s when he heard the Native American flute being played by a Taos Pueblo man at an annual poetry jam in New Mexico. He was entranced by the sound, but the seed sat dormant for 10 years until he attended a Medicine Wheel shamanic workshop at Esalen in Big Sur, CA. According to Stephen: “My friend Bob Edgar played his newly acquired cedar flute.  Wow . . . I was smitten, on fire, and had to have one.  After the workshop I drove directly to the maker of Bob’s flute, Tom White Eagle. I would have driven to the ends of the earth 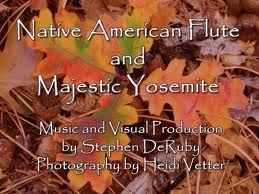 but fortunately he was only 5 hours away.  I spent the next 10 days in the Muir Woods playing my cedar flute.  I went home and into my shop to make my first flute . . . and it played! The Native American Flute called up something ancient in me.  It was as if an old companion and soul mate had come home.  Mystified by the sound, I wanted to devote my time to making and playing flutes. I’ve always loved working with my hands.  It’s my therapy and my meditation.” And speaking of playing the flute in nature, a beautiful video of Stephen’s music with photographs taken in Yosemite, near where he lives, can be seen at his website.

While Stephen DeRuby is well known for his Native flutes and music, his latest CD, Awakening, expands his vision and is more of a World flute recording that express his global musical 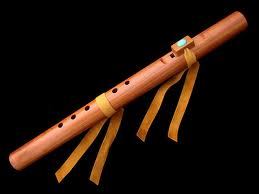 influences which range from East Indian ragas to Native American, African, Middle Eastern, Latin, and Oriental music. In addition to sultry flutes, the album also includes languid guitar, dulcimer, tambura, tabla, chants, and gentle uplifting rhythms, performed by a number of talented guest musicians. In fact, the world music influence is felt right from the first track entitled “Loving Kindness,” which opens with the mystical Eastern sound of the tambura creating a drone for guitar and dulcimer to dance upon for a full minute, before the first notes on flute are heard. When it does come in, its rich airy tone soars above the earthy vibe created by the stringed instruments. It’s a lovely combination that left me feeling inspired and intrigued to hear what musical alchemy would be conjured up in the tracks to come. On the next song, “One With You,” the sound of hand drums, acoustic guitar, and flute, create a gentle groove that becomes the sound bed for the chanting of “Om Namah Shivaya”  – an ancient Hindu mantra that is meant to cut through the bonds of the intellect to find the love and peace that dwells within. This is interspersed with poetic lyrics in English that reflect the theme of Oneness and opening the heart. 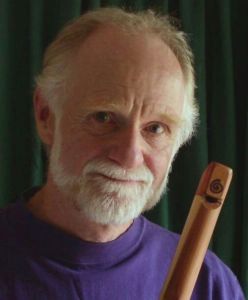 In his work as a craftsman of fine woodwind instruments, Stephen makes a wide variety of flutes, and a number of their different sounds are heard on a rhythmic track called “Pilgrimage.” Not only are various tonalities heard within the album, but also an impressive range of world influences, such as the Middle-Eastern flavor of a song called “Desert Star” and the exotic ambience of “Kundalini Rose.” In fact there is a lot of Eastern influence that is woven in throughout the album, however it is often mixed with other styles that create a cultural melting pot which brings to mind artists such as The Paul Winter Consort, Ancient Future, Michael Brant DeMaria, and others. Although its not surprising that the sounds of the East are prevalent in Stephen’s music since he has been practicing yoga, tai chi, meditation, and Eastern philosophies since 1968. It was interesting to hear the type of flutes, which are commonly associated with Native American music, being used in a variety of contexts. I also appreciated the fact that Stephen was gracious in giving the other musicians plenty of space to express themselves, which they did with supreme skill and tastefulness.

One of the more meditative tracks on the album is “River of Life,” which evokes a feeling of floating serenely down the Ganges. On a similar note, a song called “Flow” featured a chiming acoustic electric guitar with chorus effect accompanying Stephen’s graceful flute work. The album concludes, most appropriately, with a lovely tune entitled “Blessings. I say “appropriately” because it describes the feeling Stephen has about creating his instruments and playing his music. As he explains: “I’m so grateful for all the people whose lives I’ve touched with this simple instrument. I continue to be inspired by their stories and appreciation. Whether I’m making or playing the flute, my heart’s intention flows into it.  Music comes through my breath and hands. These are the extensions of my heart.  I want to feel and be felt, to make my presence known in this brief time on earth. Through the sacred and intimate act of breath and emotion, we express ourselves in waves of vibrant creation. The tone of the woodwind is the breath of spirit into matter.”  And although he says: “The ancient voice of the flute speaks from my heart in a way that words cannot, “ I’ll end this feature article on Stephen DeRuby with two of his Haiku poems:

Just playing my flute
I’m the master of nothing
Hollow, empty space