Although Raphael Groten has been playing guitar for 30 years, Journey Home is his debut solo recording on the instrument. But as the saying goes: “Good things are worth waiting for,” and Raphael has made up for lost time by delivering this finely crafted album that highlights his six-string talents. If listening to this recording brings up memories of the iconic Windham Hill sound, it is more than a coincidence. Journey Home was actually produced by the GRAMMY winning producer and founder of Windham Hill Records,  Will Ackerman himself, at his renowned Imaginary Road Studios. And as most of the recordings there are, it was exquisitely engineered and mastered by Tom Eaton, who was also a co-producer along with Raphael.

This was a landmark undertaking for Raphael who shares: “Journey Home is the culmination of a life vision: to share my music with the world. The songs themselves represent a span of 15 years of solo guitar compositions. Each song has its own unique story. The album was recorded in two days at Imaginary Road Studios in Vermont. All of the songs on the album were honed while playing as a weekly volunteer for the music in the lobby program at the UVM Fletcher Allen Hospital in Burlington, VT.”

The fact that Raphael volunteers to play music in a hospital is, in part, a reflection of his interest 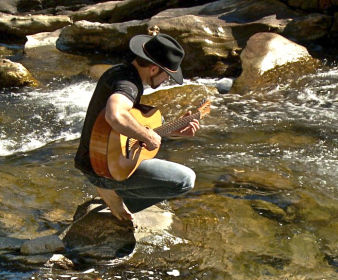 and belief in the healing power of music. In his words: “Long ago I began to realize that as I played music for people, they were being affected on all levels: body, mind and spirit. In a sacred and humble way, and with loving and pure intentions, I offer this music for the healing of all life.” In my interview with Raphael, I asked him to elaborate on how this interest developed. In his words: “I first became fully intrigued by how music affected the mind, body and spirit while taking a holistic health class in 1993. It was during this class I was also introduced to my first shamanic teacher, Susan Grimaldi. It was not until 10 years later, when I was seeking personal healing, that I began my shamanic studies with her. In 2001, at the age of 4 1/2 months, my second son was involved in a near death experience. I played my guitar for him the first and only night he spent in intensive care. The next day, a harpist played for us in his hospital room, and I felt the true power of healing music. After the accident, I continued to connect with shamanic teachers and 5 years later began 3 years of study with Zacciah Blackburn in Sound Healing. This brought together my shamanic and musical studies into one unified purpose: to play intentional, healing music for people.”

However, Raphael’s music roots extend back to his childhood. As he further shared in our interview: “I grew up in a musical household. My father’s vinyl collection included lots of classical and jazz, including the classic bossa nova (Getz/Gilberto) and the Latin side of jazz (Tito Puente). My mother brought the folk influence in the Pete Seeger tradition. (I grew up in Poughkeepsie, NY). Whenever her side of the family would gather for Thanksgiving or celebrations, there would be at least a couple of guitars and a dozen of us singing. While I grew up with a piano in the house, my first instrument was saxophone, first alto in 4th grade, then tenor from 7-10th. I picked up the guitar when I was 13. I was taught my first chords by my mother and my first finger picking by my sister. Throughout high school and while attending the University of Vermont (where I received a BA in Philosophy with a minor in Music), I penned over a hundred folk songs, often collaborating with friends on lyrics. After college, I established my first large (10 piece) Latin jazz/funk ensemble, Saudade. I produced and recorded two CD’s with this band in the late 90’s, playing extensively in Burlington, Vermont.”

Raphael’s influences are quite diverse and include Pete Seeger, The Beatles, Paul Simon, Cat Stevens, James Brown, Sting, Led Zeppelin, Chopin, World music, and in particular, guitarists such as Wes Montgomery, Joe Pass, Django Reinhardt, Michael Hedges, and Chet Atkins. Over time however, he has developed his own style which he characterizes in this way: “After nearly 30 years with guitar in hand, I have developed a finger style honoring influences from across the globe, including jazz, classical, folk, Cuban, Brazilian, Caribbean, Hawaiian and African.” 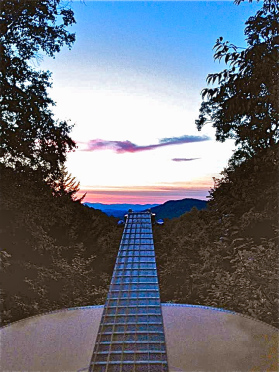 One of the most outstanding characteristics of Raphael’s sound is his spaciousness, allowing the music room to breathe between notes and phrases. In fact, the maestro Ackerman perfectly characterizes it in this way: “Raphael Groten’s music is an exercise in grace and ease. He’s not out to impress you and he’s not in a hurry. His music beguiles. He creates spaces into which one falls fully and gratefully. Raphael paints pictures of peace and contemplation and creates musical worlds that one longs to visit.” When I commented on my own observations to Raphael, he humorously replied: “I would say that while I deeply appreciate breath and space in music, I must credit Will’s Froggy Bottom guitars, which he was gracious enough to have me play on the recording! I joke with folks that Will’s guitars made each track 30 seconds longer because they would simply sustain and I would be listening.” Incidentally, for those who may not be familiar, Froggy Bottom is a company that makes fine handcrafted custom acoustic guitars, including a Will Ackerman signature model.

The album opens with a track that has come full circle, so to speak. Entitled, “Sweetness,” it was written during the pre-production of the album and ended up as the last track recorded, but the first on the album. There is a dreamy quality to this piece that puts you in the perfect relaxed state of mind to enjoy Journey Home. According to Raphael, “Each song has its own unique story. Track 2, “Black River,” for example, was written on the Black River during my 2003 trip to Brazil with my first shamanic teacher.” Its peaceful flow does indeed evoke images of drifting down a river in the tropics.

Tracks 4 through 7 are part of the album’s title suite, which Raphael describes as: “a microcosm of my work; each part carrying the listener to a different place.” In the first movement, “Journey Home Awakening,” I was intrigued by some unusual and unexpected chord changes midway. At the other end of the suite, “Journey Home Arrival,” begins with a more upbeat energy than 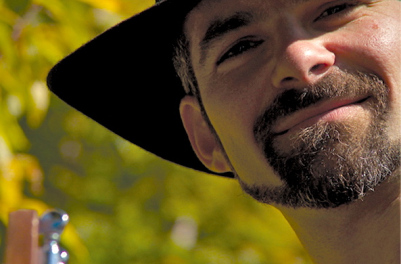 has been heard thus far on the album, perhaps reflecting the joy of being home at the end of the journey. Although the next piece, “Ebb & Flow,” is also slightly more up-tempo and features some nice classic folk-style fingerpicking that reminded me a bit of guitarists like John Fahey or Leo Kottke.

A touching tale is told instrumentally on a track called “Grandpa’s Hands,” which Raphael describes as “an homage to the big paws of my maternal grandfather.” It’s a lovely heartfelt piece tinged with wistful sentiment. I also enjoyed Raphael’s fretboard technique and melodic direction on a song called “Truth.” Journey Homeconcludes with a brief reprise of the opening track, “Sweetness,” which bookends the album perfectly.

For me, the outstanding feature of Raphael’s music is the ambiance it creates. There are many times and spaces where this would be the perfect soundtrack: early morning, late night, for relaxing, receiving a massage, doing yoga, etc. Again, I must reiterate about the spaciousness of these compositions. New age music pioneer Steven Halpern often speaks about the space between notes being as important and as much a part of the music as the notes themselves. Raphael seems intuitively aware of this in the way his notes and phrases are punctuated by silence. Journey Home is one of the most serene acoustic guitar albums I’ve ever heard. To further elaborate, I’ll leave the final words to Raphael: “To me, being a musician involves offering an uplifting, contemplative and ultimately healing experience to the listener. As I play each concert and as I record each song, I imbue my music with mindful intention for the wellbeing and healing of all life.”