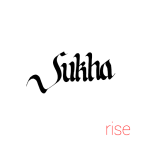 The devotional chanting of mantras is a spiritual practice that has been around for thousands of years. For those who may not be familiar, a mantra is defined as: “a word or sound repeated to aid concentration in meditation, a Vedic hymn, a statement or slogan repeated frequently.” Throughout the centuries, the form of mantra chanting has probably changed very little, that is until more recently, where contemporary spiritual seekers are finding new and innovative ways to present this ancient practice. Among these sonic explorers is a group called Sukha who takes a bold direction in their blend of sacred singing with rock music.

The core of the group is a husband and wife team, Sukhmani (Nicole) and Sukhman (Steven),

although they often feature additional musicians in their live performances, as well on this recording, of which there are quite a few. According to their bio, the couple met in Boston in the late 1990’s and have been writing and playing music ever since. Once they discovered the beauty of Kundalini Yoga in 2009, they knew they wanted to help inspire others through Kundalini Yoga music, mantra and sound. Sukhmani is also an active Kundalini Yoga teacher in Southern California and Sukhman is an avid yogi. Once they started practicing Kundalini Yoga, which included lots of rhythm and chanting…they decided to start writing music for mantras and English music for yoga inspiration. They wanted to infuse their style of writing and rock with mantra. They do many “Rock Your Mantra” workshops where people can discover/connect to mantra in a fun and experiential way. Sukha provides their music throughout Southern California currently to the tune of almost 300 classes/workshops/concerts per year.

Although the band is relatively recent, Sukhmani and Sukhman both have a long history in music. Sukhmani began singing at the age of 3 and was always playing records and singing while on her rocking horse.  Her first record, “Rock Around The Clock” by Bill Hailey and the Comets, with the b-side of “Shake Rattle and Roll” was purchased for her by her mother who was a singer. Her father, a huge fan of jazz and Frank Sinatra, was constantly playing it in the house. Sukhman started playing and writing music at about the age of 8. Listening to Jimi Hendrix, Coltrane, Zappa, Leon Redbone, and Charlie Parker in his younger years, Sukhman played piano and keyboards before switching to guitar as a teenager.  Sukhman was a sought after guitarist by Berklee College of Music students, even though he was accepted, he decided not to attend. However, he met Sukhmani there and they were in a band together. 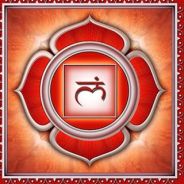 This album, Rise came from music and mantras used in the Kundalini Yoga classes Sukhmani teaches. Sukha provides live music for a lot of her Kundalini Yoga classes as well as some of Guru Singh’s classes at Yoga West in Los Angeles. Sukha (Sukhmani and Sukhman) began to reflect on the Root Chakra and the activation and rise of Kundalini energy and the stories the students would tell them of their Kundalini experiences.  The title track “Rise” was inspired by what the discipline of yoga and meditation the connection to the greater vibration can bring.  In their words: “The mantras contained on this album belong to an extensive catalog of yogic knowledge. Mantras have power and contain vibrations of peace, connection, and many other qualities that can be understood through one’s experience with them.”

The opening track, “Ong Namo” translates to “I bow to the subtle divine wisdom. I bow to the divine teacher within.” This mantra is used before meditation or yoga. Kicking off with a backwards cymbal swell, the song’s laid back dreamy groove and slide guitar riffs immediately evoked a Pink Floyd vibe for me. After a minute long instrumental intro, the mantra chanting begins with multi-tracked vocals accented by tasteful guitar fills. I especially liked that the voices were recorded with reverb to add a bit of atmosphere and dimension. A tasteful blues-rock electric guitar solo furthered the David Gilmour/Pink Floyd comparison in my mind. The track makes a wonderful entry into the album and sets the stage for what is to come.

The dreamy rock ballad vibe continues into the next track entitled “Wah Yantee,” a mantra to awaken the intuition. An interesting variation came when the song shifted into a more upbeat section before dropping back down. This brought home the idea that their mantras are structured more like traditional songs with verses and choruses, compared to the more repetitive traditional style of mantra chanting. Interestingly, the album’s folk-rock influenced title track features lyrics in English, although elements of mantra are infused with it. As the inspirational lyrics say:

I was impressed with the compositional detail that went into a nine and half minute track called “Gobinday Mukhanday.” Starting with spacious synthesizers and piano, an intricate, almost marching-style drumbeat creates a rhythmic foundation for the song that evolves through a number of diverse movements. In a middle section the rhythm drops out and song evolves into a quasi chamber music interlude that was quite an interesting change up. Eventually the mantra 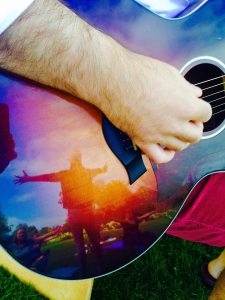 vocals reappear quietly and ghostly in the background, slowly building in volume as the drums, bass, and other instruments join in.

Another surprise I had with this album was the amount of space that was given to instrumental sections. A track called “Humee Hum” had extended instrumental breaks and featured some of the most psychedelic electric guitar I’ve heard in a while. The eight-song album concludes with the longest track, an eleven and a half minute epic called “Mui Mantra,” which is the root mantra from which a spiritual foundation is built. This piece took me back to Pink Floyd territory again in its slow-rolling misty ambiance. In sections, the voice of Yogi Bhajan is heard repeating spiritual verses over the music. There is a trippy meditative feel to this track that takes the listener on an inner journey and makes for a perfect ending, just as the first track created a perfect beginning.

I found Rise to be a totally intriguing listening experience with more unexpected elements that I could have imagined. I’ve heard other albums before that were a blend of mantra and rock, which were basically just a continual rock beat with chanting over it. The thing that impressed me most with this album by Sukha is that these are extremely well written compositions that could stand as instrumental pieces on their own. It is obvious that the music itself was as important as the chanting, and not just a background for the mantras. 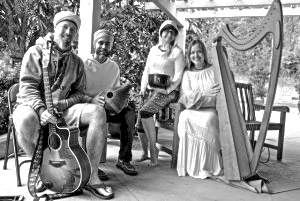 That said, the vocals on the album are exquisite. Sukhmani’s voice is as beautiful on its own as it is blended with other voices in a heavenly choir. I was also inspired by how she was able to express herself creatively in a variety of different rock music styles. Sukhman’s background vocals blended perfectly and created a lovely balance between his more earthy energy and Sukhmani’s spacious sound. I also appreciated what an excellent acoustic guitarist he is, and how much his playing added to the overall feel of the album, again in a diversity of styles, and from finely articulated picking to foot-tapping strummed rhythms. With ten other accompanists on the recording, I won’t name them all, but the level of musicianship on every track was outstanding. When Sukha performs live, the group also includes Eliza Shah on harp and background vocals, and Stefanosis Hansraj Singh on percussion.

As much as Rise is a joy to listen to on a musical level, it is equally inspiring on a spiritual level. In this regard, I’ll leave the final words to Sukhmani who shared in our interview this reply to my question about the group’s musical vision: “We truly believe that mantra and music can raise one’s vibration.  One person today could mean many people tomorrow.  We hope to help elevate the planet in some way through the magic of mantra and music.”