The title of the new release by Neil Tatar and David Darling, Where Did The Time Go poses a question you may well ask yourself after becoming totally absorbed in listening to this captivating music. Although this is their first collaboration, both are veteran musicians with extensive experience in music and the arts.

Neil is an accomplished guitarist who also plays piano and percussion. While the music on this album leans more

towards the instrumental new age genre, his roots are in blues, R&B, and light jazz. In addition to being a performer and recording artist, Neil has been active in music education for decades. As President of the Board of Directors and a graduate of the Music For People Musicianship and Leadership program, Neil incorporates the teaching principles of the program to provide participants with the tools to enhance their improvisational skills. He also leads groups and workshops for children and adults with various disabilities. Neil’s background in tai chi and meditation are part of his programs as well as his personal inspiration. 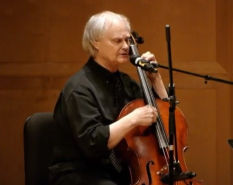 David Darling is an award-winning cellist and composer known by many as a former member of The Paul Winter Consort. Often referred to as the “maverick cellist,” David has had an extremely diverse musical career and has worked with a wide range of artists including Paul Horn, Steven Halpern, Bobby McFerrin, Peter Kater & R. Carlos Nakai, Arlo Guthrie, Baba Olatunje, and many many more. David’s 2010 release, Prayer For Compassion, received the GRAMMY that year for Best New Age Album. He has received numerous other awards as well. In 1986, David founded the above-mentioned non-profit educational organization Music for People, in addition to having been involved in countless other musical and educational projects over the years. Along with his work as a solo and collaborative musician, he has written and performed music for more than a dozen major motion pictures.

The album sets sail with the appropriately titled “Journey.” The drone of an Indian instrument called a tamboura creates an exotic mystical atmosphere further enhanced by soft tinkling chimes. Neil’s acoustic guitar provides both background and melody that drifts over the soundscape. David’s cello weaves in and out of the sonic tapestry, perfectly accenting the guitar phrasing, with an occasional hint of Eastern influence. Neil’s blues and jazz influences surface from time to time, adding flavors not as often heard in this genre of music. Next, on the album’s title track, Neil opens with a peaceful impressionistic piano piece that David’s soulful sonorous cello dances upon. It’s a lovely duet and a nice contrast to the guitar and cello pairing of the first track.

On a track called “Tuesday,” Neil takes a solo flight on multi-tracked guitar that ventures into some interesting air space on the chord changes punctuated by tasty lead guitar riffs. One of my favorite songs was “Garuda,” that is anchored by an earthy hand drum rhythm and sprinkled with ethereal ambient cello, guitar, and piano accents. It is a perfect blend of movement and spaciousness that I found quite appealing. Another sweet duet was “Waltz For Lini,” which is played in ¾ time as waltzes traditionally are. This piece has a graceful romantic air that easily entrains you in its rhythm.

At over 9 minutes in length, “Return To Journey” is the longest track on the album and offers a reprise of the exotic 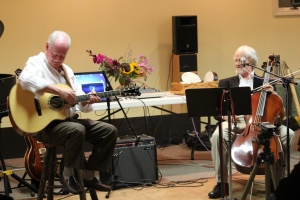 Eastern vibe on the opening song. On this one, however, Neil is providing the foundation on piano instead of guitar. David’s cello playing is exquisite on this musical meditation and the song explores some more experimental directions as it unfolds. There is an improvisational feel to the piece that creates a dreamy atmosphere, which is easy to drift away on. A track called “The Last Dance” is another piano and cello duet, this one with a more romantic ambience. At times David plucks the strings of his cello like a bass, as well as bowing them. Another of my favorites is the song that brings the album to a close. Entitled “Celebration of Dudek,” this one also features a hand drum rhythm that lays down a toe-tapping beat. It’s definitely the funkiest song on the album and features Neil on guitar showing a bit of his roots. This is balanced nicely by David’s sweet cello providing more sustained sounds and textures – a very cool combo. You can tell it’s working when the groove keeps going in your head for a while after the song has ended.

Where Did The Time Go by Neil Tatar and David Darling provides an intriguing intersection of musical influences – one of the most unique I’ve heard in a while. As a guitarist myself with a background in blues, rock, and jazz, it was refreshing to hear traces of these genres being woven into the fabric of these songs. I will point out, however, that they were subtle and perfectly integrated, giving the mix a unique character all its own. I’ve had the good fortune to hear numerous recordings that David Darling has performed on over the years. His playing is always the epitome of tastefulness, tone, and creativity. And this is certainly the case on this new release. The combination of Neil Tatar and David Darling brings together two supremely talented artists, each with a lifetime of musical experience, to create an album that is greater than the sum of its parts. Where Did The Time Go is an eminently enjoyable listening experience that will appeal to a wide range of music lovers.