Described as “a beautiful blend of Kundalini Yoga mantra, sacred chants and world music,” the sound of Mirabai Ceiba is a uniquely cross-cultural experience on a number of levels. Their latest album, Between The Shores Of Our Souls, also includes inspirational lyrics based on the poetry of Rumi and Kahlil Gibran. The album’s subtitle, “Songs of Love and Longing,” bears witness to the focus of their creative endeavors. It also expresses the energy that resonates between the two principle people in the group, Angelika Baumbach and Markus Sieber, who are a couple from different worlds brought together by fate. While Markus was from East Germany, Angelika was born in Tucson, Arizona, and grew up in a small village near Mexico City, the daughter of a Mexican mother and German father. They met, of all places, in Scotland and it was love at first sight. From that point, their relationship became a vehicle for their own style of deeply devotional music.

The group’s name “Mirabai Ceiba” further reflects the aforementioned cross-cultural influences, in this case India and Latin America. Mirabai was a Hindu devotional singer in the 14 Century, whose name represents “the exploration, the devotion, and the inspiration in all the different aspects of divinity.” And the Ceiba is a sacred tree of Latin America, which is never cut and grows very tall. According to the duo: “We wish our music could be like the Ceiba tree, with roots deep in Mother Earth and branches extending far and wide into Father Sky.” Honoring her Latina roots, Angelika sings two of the album’s 10 songs in Spanish.

In addition to Angelika’s ethereal vocals, harp, piano, harmonium, and singing bowls, blending with the equally haunting vocals and guitar of Markus, they have expanded their artistic and cultural inclusivity even more with a host of world-renowned musicians. The list includes Norwegian jazz musician Nils Petter Molvaer on trumpet, cellists Noah Hoffeld and Yoed Nir, Megan Gould on violin and viola, also on viola, Karen Waltuch, and percussionist Benjamin Wittman. In addition to playing five different instruments and providing vocals, Jamshied Sharifi also served as producer. The album was recorded in Mexico, with additional tracks added in New York City.

The vocal synergy of Markus and Angelika is breathtaking as they merge in blissful harmony on the title track, which opens the album. Their heavenly vocals are set against a soundscape of acoustic guitar, strings, bass, and subtle percussion. Ambient trumpet wafts gracefully like smoke from incense, scenting the air with its fragrance. The words of Gibran inspire and entreat us to: “Let your love be like the moving sea between the shores of your souls, let the winds of heaven dance between you.” 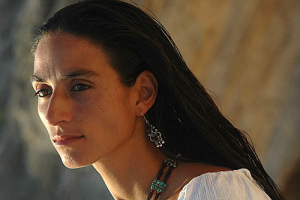 As if their song “Ocean Of My Dreams” was not beautiful enough already, it is taken to another level (literally) in a stunning music video on their website that features the dream-like underwater photography of Elena Kalis, and the words of Rumi. The first of the two songs in Spanish is “La Luna,” whose lyrics, interestingly enough, come from an ancient Zen poem. Although I don’t speak the language, I felt like I connected with its essence, which was conveyed in Angelika’s softly sensual singing. I particularly liked the subtle Latin influence in the rhythm and the soulful cello in counterpoint with plucked harp later in the piece. The second of the songs with lyrics in Spanish is “El instante Eterno” (The Eternal Moment), and was an original composition by Mirabai Ceiba. “This song was written over time as words of love from across the oceans,” according to Angelika. An English translation of the first verse gives an idea of its poetic imagery:

And the sea, with its eternal blue
opens like a flower
Between you and me 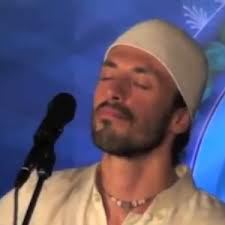 On a number of the songs, including “Become My Life,” “Tell The Clouds To Weep,” and “Burn Of The Heart,” all with lyrics by Rumi, Markus takes the lead on vocals. His voice has a unique almost-whispered quality, which is both soft and strong that works perfectly in this context, either on its own or in unison with Angelika. The blending of their voices is truly magical. His gentle finger-style guitar playing is an integral element in the alchemy of Mirabai Ceiba’s sound. And speaking of magic, with this being an album of acoustic music, it was interesting to hear some electronic effects being applied to certain instruments on “Breeze At Dawn,” giving the song a touch of psychedelic ambience that was mesmerizing.

While I’ve been focusing mainly on Angelika and Markus, I must say that the level of musicianship by the supporting players is quite impressive as well. The duo has surrounded themselves with a stellar cast who make these luminous compositions shine even more brightly. The music of Mirabai Ceiba is enchanting, and I genuinely enjoyed every song on the album. What comes through in the music is the purity of their intent. Their own words will provide a perfect conclusion to this article and give the reader a final bit of insight into the motivation of these gifted artists: “What inspires us is to express ourselves from our hearts, by connecting with the universal heart, and in this way opening a space where we are able to meet with people through music and chanting, and together manifest our intentions of healing, love and peace.” 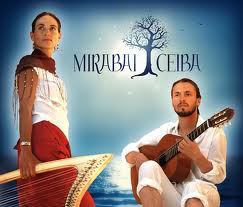